Hank Campbell
Packages and labels can be a bit of a mess in the 21st century. What is GMO plastic? Who knows? Yet a company named World Centric is selling ZeroWare 2.0 Reusable Dishware - "alternative" tableware they note is not only free of melamine, which they claim is killing people, but is also made from "Non-GMO plastic."

Naturally, I asked their PR rep what Non-GMO plastic was and got no response. Every one of these shady companies claims they are about science and health, but they are about money and will ghost anyone who asks an obvious question, like how they can be an alternative to GMO plastic when plastic has no organism to genetically modify.

FDA can't find any health risks from melamine nor BPA but at least if you melt enough plastic and feed it to rats it the plastic will kill them, so groups can sort of claim a science-y basis while still being able to sleep at night, but non-GMO plastic is just silly.  World Centric also declined to comment on how they position a product with 30 percent talc as "healthier" when lawyers have thousands of lawsuits against Johnson  &  Johnson claiming it causes ovarian cancer. 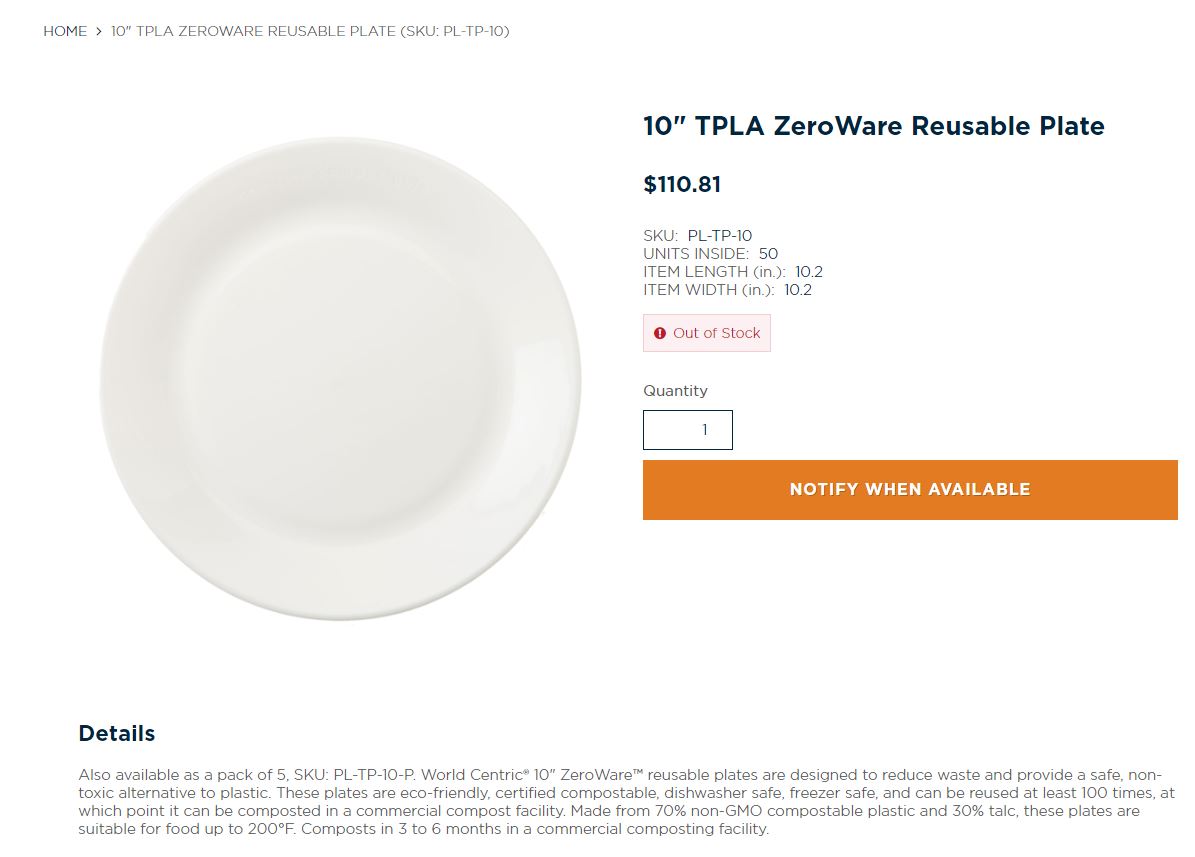 Want to spend $100 for something you can use for a year and then pretend it is better for the environment to buy a new one? ZeroWare is for you. But keep in mind this is not backyard compostable. It is going to be shipped long-distance to a commercial composting facility in giant emissions-belching trucks.

They don't need to answer questions, the law lets them claim anything except their product will cure cancer. It's a nightmare out there for the public because of this predatory labeling and government allows it. The same FTC that once told Kraft they couldn't advertise that their cheese singles contained five ounces of milk because of the implication the cheese might have as much calcium as 5 ounces of milk when it only had as much calcium as 3.5 ounces of milk, now lets Whole Foods lie about its food being grown without pesticides. You can claim broccoli is rice and almond juice is milk. Maybe you can even claim your bacon is vegan even though it's made of meat. Since just 2017 there have been 62 proposals in 17 different states to create new label rules. It's a mess thanks to FDA and FTC (and you also, USDA, you started this mess with your nonsensical Certified Organic label) refusing to do their jobs.

Representatives Kurt Schrader (D-OR) and Adam Kinzinger (R-IL), want to fix that.  What? Democrats and Republicans engaging in governance for the public good in an election year? It's okay to be shocked. They want to amend the Fair Packaging and Labeling Act to increase trust in labels by implementing science-based criteria for state and local labeling requirements, allowing "smart" labels where you can just hold your phone up to it and get everything you might want to know, and makde sure that the information mandated is risk-based.

Obviously activist groups hate this idea. As long as claims are allowed to be "hazard" based rather than risk-based, they can promote fear and doubt just by noting that International Agency for Research on Cancer (IARC), National Institute of Environmental Health Sciences (NIEHS), or other wacky epidemiologists correlate some product to harm using 10,000 times a normal dose.

Existing rules are great for Non-GMO Project or companies touting BPA-Free and Non-GMO Plastic, but it is terrible for public trust in government policy. Representative Schrader should be applauded for defying his party to protect the public by tackling something Democrats vehemently oppose - truth in labeling.

Until this happens, if you are a Venture Capitalist and want to help me sell a bacon product that identifies as vegan, give me a call.
Science 2.0
More Articles All Articles
About