Hank Campbell
During last night's Presidential debate, former Obama administration Vice-President and Delaware Senator Joe Biden said something that had Democrats worried and even the most partisan fact checkers holding up an index finger: "I have never said I oppose fracking."

Democrats absolutely do oppose natural gas, along with nuclear and even hydroelectric power, so they may have been shocked by his statement. They can rest easy. Not only does Biden oppose fracking, despite its benefit to the environment over coal, he believes in lots of other anti-science things that cater to the populism of his base.

More worrisome is that in saying he does not oppose fracking, he is sticking a finger in the eye of his former boss, the guy who is campaigning for him, President Obama. He's even sticking it to his own energy platform: 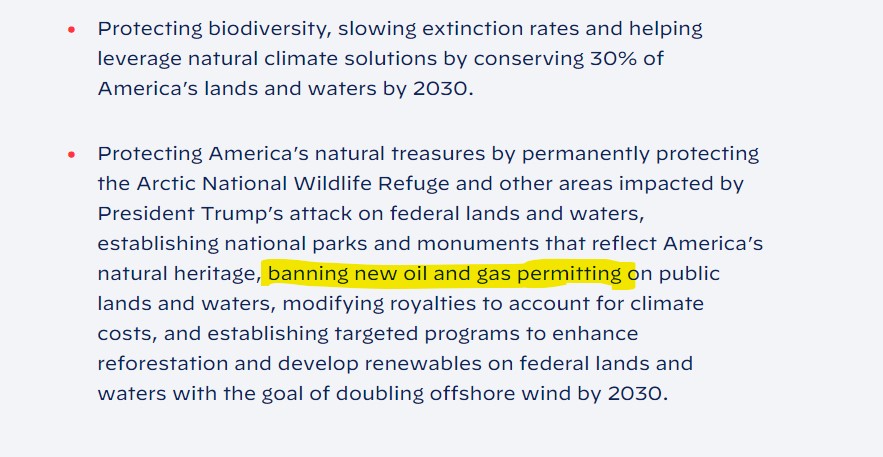 If we care about CO2 emissions - and we do, the pivot to concern about methane only happened after CO2 dropped, it is a manufactured headfake by anti-science activists - so the Obama administration was not wrong to encourage fracking on public land. Where they were wrong was in catering to populism on the Arctic National Wildlife Refuge. Like telescopes in Hawaii, the controversy in Alaska was entirely manufactured by Democrats from the mainland - professional protesters - who stoked fears among natives for political gain. They rolled out a marketing campaign with Caribou munching on grass when in science reality the place where fracking would have occurred is barely distinguishable from the moon.

More fracking, especially in desolate moonscapes, is a good thing. It keeps energy affordable for the poor, which Vice-President Biden says he cares more about, and the record on improving emissions is clear.

Fracking has benefited the environment more than regulations

In 2017, President Trump abandoned the never-enacted and oddly named Clean Power Plan for the most obvious reason; new restrictions that would have been mandated for 2025 had already been achieved by the free market. It turns out that energy companies don't like to waste energy, their source of profit. So they were doing far less wasting while the CPP was being dunked on in court.

Energy companies had moved off of coal and into more natural gas, using old wells that were suddenly viable again thanks to hydraulic fracturing. Those were both wins for the environment. It's a more efficient method of fracturing than older natural gas techniques and far better than brute force coal mining.

The Obama administration endorsed fracking by allowing it on public lands even while they told the Energy Department to throw money at solar panels, propping up competitors with no basis in science or economic reality. Americans working hard to pay taxes saw $70 billion wasted in a bizarre effort to compete with China on solar panels, where laborers were working for $1 an hour. That money would have been far better spent metered out over 30 years on basic research. It will take that long, but it if works, solar will be worth it. Instead, it was sprayed like a firehose at Democratic donors who just happened to also believe that we could make cheap solar panels in the US if taxpayers were willing to bankroll them.

Let's hope Biden really wants to clean up the climate, because Democrats created the emissions problem in the US by banning nuclear - and creating need for coal 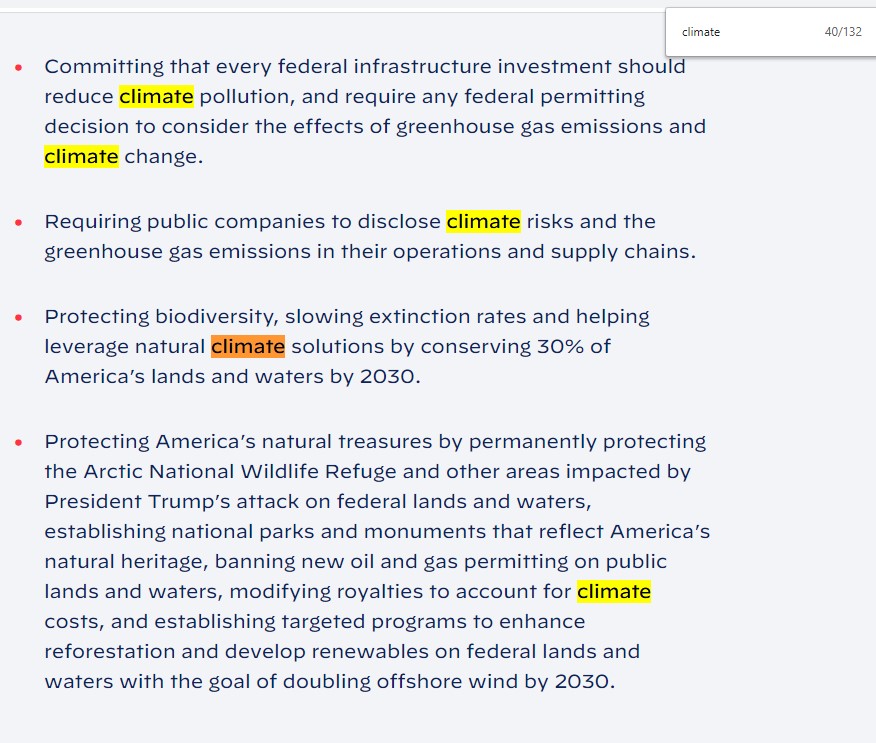 The Biden platform mentions the word "climate" 132 times. That's actually a good thing, because he shares responsibility for creating the emissions mess that fracking has begun to fix.

Joe Biden was a Senator in 1994 when his good friend, Senator John Kerry, and President Bill Clinton scuttled America's nuclear energy capability. Democrats cheered, Biden supported the move, and even repeated the debunked claim that any nuclear energy research could be weaponized. America would have 4th generation nuclear by now if Democrats were not reflexively anti-science when it comes to energy.

In the 1990s, with nuclear already under moratorium, and fracking for natural gas not yet viable, America used more coal than ever and our CO2 emissions rose. When did that trend reverse? After more natural gas went into use over the opposition of Democrats.

Rather than embrace cleaner energy that is affordable, Biden and Harris continue to latch on to bizarre pipe dreams, like ethanol.

Biofuels are terrible for the environment. Even Al Gore admitted he only endorsed them to appeal to Iowa farmers for the 2000 election.

Biofuels sound great; using renewable plants to generate energy is a wonderful concept. And some day they may be viable, just like solar might be, but the worst way to limit progress is by handing taxpayer money to companies stuck in the status quo rather than using that money for basic research. That is the problem with biofuels. Like solar, they are old technology that does not work being propped up by government fiat. They have no reason to improve and do not improve. Claims that they are viable now are blatant lies. Without government mandates and subsidies, those industries disappear.

Bio-ethanol is worse for the environment because it takes more energy to produce than fossil fuels. Yet is no cleaner when burning. It is also worse for cars, which means it will lead to more turnover, and it is grown on land that could be used for food.

Scientists knew all that. And were ignored by another Democratic Vice-President, Al Gore, who famously forced EPA to mandate biofuels over the objections of government scientists by breaking a tie in the Senate in its favor.

Once his political career was over, he admitted why he really did it: "One of the reasons I made that mistake is that I paid particular attention to the farmers in my home state of Tennessee, and I had a certain fondness for the farmers in the state of Iowa because I was about to run for president."

It had nothing to do with the environment or affordable clean energy, nor does much of the Biden-Harris energy platform. Like most political statements, it is instead populist rhetoric selling science fairy tales.

Instead of banning natural gas, Biden should ban new permits for biofuels on public land.

The Obama administration turned ethanol into the number one use for corn in America, and then they turned over 5,000,000(!) acres of public land to corn farmers to grow even more of it, despite the environmental drawbacks.

What happened when all of those prairies were plowed? All of the carbon they had been storing was released back into the air. Yet the Biden-Harris campaign claims they care more about global warming than Trump. Fewer emissions are a way to show you care, not subsidized disasters that are promoted by environmental lobbyists.

There may be many good reasons to vote for the Biden-Harris ticket, there may even be other worthy science reasons - but his stance on energy policy is stuck in the 1960s, which is a worrisome sign that he will also cater to the fringe beliefs of Democrats on vaccines, agriculture, and chemicals. Instead of siding with science.
Science 2.0
More Articles All Articles
About