Hank Campbell
The Doomsday Clock, a marketing gimmick of the anti-nuclear group Bulletin of the Atomic Scientists, gets an unreal amount of attention from political allies in journalism in a way that scientists can't understand any more than how Environmental Working Group's so-called "Dirty Dozen" list of foods (that strangely exempts organic food pesticides their corporate donors sell) gets so much corporate media coverage.

Bulletin of the Atomic Scientists must be short on cash this year because they have pulled out all the stops and declared that we are closer to the apocalypse than at any point in their history. That means they think we are closer to earth being destroyed than when the communist dictatorship in the USSR stole the plans for nuclear weapons or when a nutjob like Khrushchev had access to atomic bombs or during the Cuban Missile Crisis he created.

Why don't journalists call this nonsense out instead of spreading their propaganda? 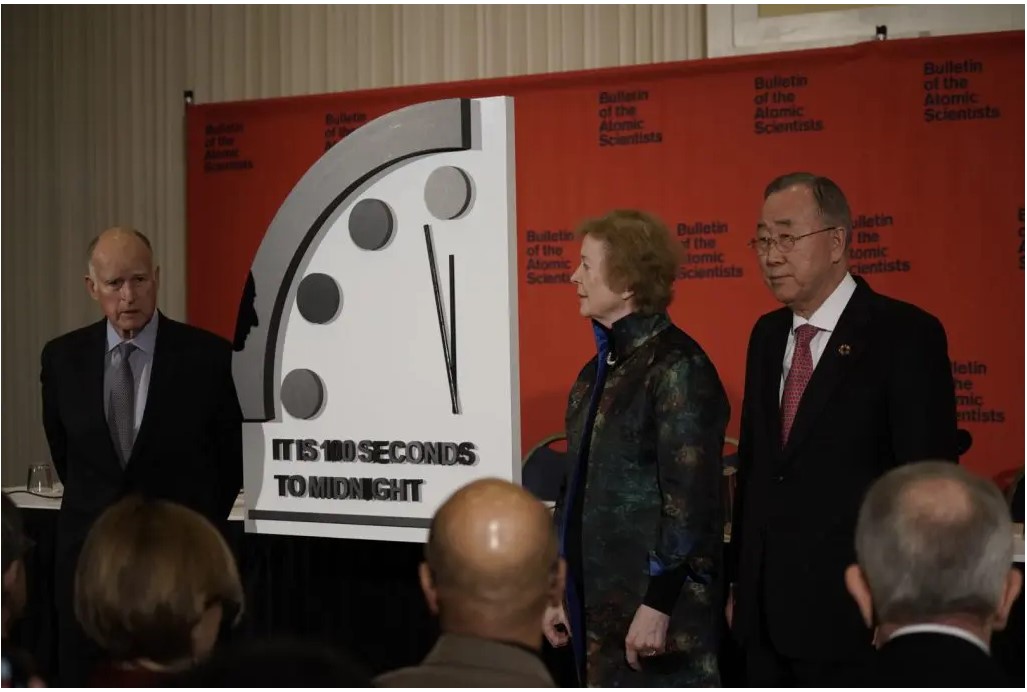 On the left, former California Governor Jerry Brown, executive chair of Bulletin of the Atomic Scientists, so fringe he tried to get anti-nuclear activist Jane Fonda appointeed to his administration while Governor of California. His effort was denied, with one state Senator who voted against her noting, “By all standards by which I was raised, Fonda was guilty of having committed treason,” because she cheered on the North Vietnamese while they shot American planes. But it wasn't Fonda who famously called him "Moonbeam" for his supernatural beliefs, it was his girlfriend Linda Ronstadt. He's certainly not gotten more scientific with age, but he is beloved by anti-science progressives, which makes him perfect for their photo-ops.

It has been said that many journalists, including in science, went into journalism to do progressive good works rather than report facts, and if you look at the highest-paying jobs in journalism, from the New York Times to ProPublica, there is overt selection bias in hiring employees who've demonstrated solid progressive credentials. That means older ones were steeped in anti-science dogma and oppose nuclear energy with the same fervor they oppose agriculture and medicine.

The political underpinning of science journalism is why nuclear energy denial does not get the same attention as global warming deniers and even vaccine deniers only got called out as a political demographic when the right started doing it a few months ago; despite the California coast, 80 percent Democrats, having more vaccine exemptions for kids than the rest of the country combined.

If you are on the left, the chances that you distrust energy science, including nuclear, agricultural science, and vaccines are actually far higher.(1) Bulletin of the Atomic Scientists makes no secret of their agenda, and they don't need to, because they are so entrenched in the Democratic party that President Obama even appointed the head of their group - with no nuclear science experience of any kind(2) - to run the Nuclear Regulatory Commission. Imagine if President Biden appointed a Vice-President of Sales at Exxon to run EPA, that's the same kind of bizarre decision it was to experts.

Their latest annual fundraising campaign involves, of course, COVID-19, but they frame it as that because government can't control disease it can't control nuclear weapons. To literate people, which should include all those humanities Ph.D.s who run this supposed atomic science group, that is like claiming if you can't control the rain you shouldn't be allowed to drive a car.

They also throw in climate change and all the other stuff from previous fundraising drives, but really they are leveraging the pandemic for financial gain.

They make their claims without shame because they are not in a war on nuclear weapons, they are in a war of extinction against nuclear science, and the people who give them money distrust all science just as much. If they had more actual scientists in the group they'd know that their claims that 'all nuclear energy can be weaponized' are ridiculous. If President Clinton and Senator John Kerry had not torpedoed nuclear science in the 1990s, America would have done the same thing for nuclear energy we did for cell phones; we would have fourth generation nuclear technology that could not melt down by now.

Instead, Bulletin of the Atomic Scientists and their political allies went the opposite way, and created the climate change problem.

Thank Bulletin of the Atomic Scientists For Global Warming

In 1994, after President Clinton honored his campaign promise to wealthy old Democrats and banned most nuclear energy research because Jane Fonda was in a movie about a nuclear meltdown that one time, the political campaign to shut down all nuclear plants, with replacements already on hiatus, went into high gear. What replaced nuclear energy?

Natural gas is great, environmentalists even promoted it before it became the solution to the emissions problem, but hydraulic fracturing (fracking) was not yet viable, so the loss in energy from nuclear sources could only be met with coal, and U.S. CO2 emissions shot upward. They did not subside again until natural gas overtook coal in 2010.

Now activists like Bulletin of the Atomic Scientists oppose natural gas too, along with hydroelectric power.  They and their allies have now turned against dams to raise money, even though 60 percent of farmed vegetables in the United States use water provided by government dams and canals - including the organic food their political proclivities mandate they must endorse. They are clueless about the real world. Because the need to raise money is an annual one, they can never be content, so while advocating for bans on energy that have proved to affordable and better for the environment, they promote solutions every scientist knows don't work, like solar and wind.

Worse, they seem to like the pandemic and all that havoc it has caused, because it can help them raise money. They gush that hundreds of millions of people becoming unemployed, who are being evicted, or are losing homes, have led to a decline in CO2 emissions - and wish it would continue. It's a surprise they don't use the alarming increase in suicides and domestic violence for their financial gain as well.

Bulletin of the Atomic Scientists used to be just anti-science. Now it is anti-people. Unfortunately, given the media attention they continue to get, they won't be going away any time soon.

(1) Yet all we read about in media coverage now is right-wing people who distrust the COVID-19. 1% of the vaccine deniers of the left get 500% more media attention, when in California we literally had to pressure the Governor to sign a law banning arbitrary vaccine exemptions, because the coast of the state had more vaccine exemptions than the rest of the U.S. combined.

(2)The current leader of these supposed "atomic" scientists has a PhD in political science from a reliably progressive school in Manhattan - a boro of New York City which is over 80 percent Democrats.
Science 2.0
More Articles All Articles
About