Hank Campbell
Nothing killed science culture more than Spock from the 1960s television show "Star Trek." He was wildly popular because he was so logical and reasoned. Emotions did not enter into his decisions. Scientists flocked to that mystique and so a whole generation of scholars sought to be dispassionate and data-driven in their interactions with the public.

And activists opposed to science gained a lot of ground as a result. When you have a passionate person on one side yelling that science is dooming us all and another saying 'let me show you some slides' people are going to get precautionary and assume the passionate person cares more for a reason. In 1980 the world got Yoda, a puppet in "The Empire Strikes Back" who turns out to be a very wise Jedi master. He mixed up his syntax, he was as emotional as anyone, but he still could show us the way.

And that works better than the suppressed emotion technique, according to a new psychology paper. Spock assumes everyone will be logical, and if he just shows some data on why, for example, modern agriculture is better than 1940s organic techniques, minds will change. Yoda recognizes that people are not always thinking about the science, food is a values issue (at least to the wealthy) because we cannot opt out of eating. So those who can afford to make decisions based on the values they attribute to Pink Himalayan Rock Salt with a Non-GMO Project sticker. They may make decisions based on emotion but will often put on the Spock mask to rationalize their choice. Yoda understands that. 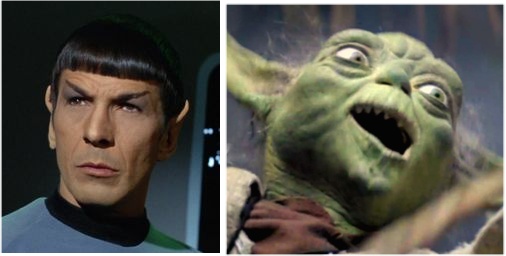 Spock and Yoda. Both are wise, but one belongs in an ivory tower while the other changes minds. Copyrights Viacom and Disney.

The authors talk about the need for emodiversity, which sounds like groups of depressed people with bad haircuts who don't all look the same, and they cloud the issue with postmodern jargon about epistemic humility and self-transcendence, but they are really talking about empathy. The emotional down-regulation of Spock doesn't work as well as controlling destructive emotion, the way Yoda advises, when dealing with the world. "No one ever quietly went on a cleanse," the saying goes, and that's no different for how people see vegans or organic food shoppers, but screaming at them won't help any more than showing them a chart with how much better corn yields have gotten will.

The data is all observational, and therefore inherently weak even though n=3678, but if we dispute the data because of some of the methodology (diaries, surveys) we're falling into the Spock trap. And one seemingly strange result, that emotional intensity sometimes showed a positive rather than negative association with wisdom, is actually a good thing. It would actually disqualify the whole paper if it weren't so because that would mean the results defy what we know about actual behavior.

Emotion does help but wise reasoning uses it sparingly. If you want a specific question answered you would ask Spock, but Yoda has a more lasting impact on pop culture than Spock because when he was angry, it meant something.
Science 2.0
More Articles All Articles
About