Hank Campbell
One thing that must annoy psychiatrists is that everyone will try to claim expertise in their field if they want to make a political point - in the case of a recent paper it is literally humanities scholars who want more mask and vaccine mandates.

To achieve that, and despite having nothing we might consider qualifications, they used profiling to suggest a clinical diagnosis. They did it by creating their own custom analysis to claim that while other studies showed there were lots of reasons people might not like to wear a mask, opponents casually claiming they were selfish or even narcissistic are clinically correct.

The data were from a YouGov survey taken between March 10–22, 2021 of 1,100 U.S. respondents nationally representative based on self-reported age, gender, race, and education. It sounds scientifically truthy but lots of findings can start with data, that is why statistical significance is so abused and misused. In psychology, it is so abused that almost every paper with an initial hypothesis is deemed true.  Data can be exploited to correlate anything to anything, that is why a whole spurious correlations website was created. Breatfeeding makes kids more intelligent and breast milk contains 'toxic' chemicals can be used to show chemicals make kids more intelligent.

If such junk findings happened in science there would be a fraud investigation into the field but people in the social sciences and humanities using shaky methods are no more likely to flag shaky methods during peer review of others than a UFO believer is to call out fake alien invasion claims.

It becomes difficult to critically analyze such methodology because it is so broad and with so many variables you can't say it is wrong - only that you can only show almost anything is right using the same techniques. In this case the authors determined grandiose narcissism using the Narcissistic Personality Inventory, 25 measures that seek to determined "egocentrism" and then use that to claim it is Republicans more likely to be such.

Again, the authors are a political science scholar and a business school professor.

If they were qualified, or at least willing to falsify their own hypothesis rather than have a political belief and write a paper to support it, they'd know their method is like using a risk factor for a risk factor for a disease to claim some chemical is bad for you or some new miracle food should be consumed. Unfortunately, it is really common in epidemiology, Harvard built their whole School of Public Health using food surveys like that. And in psychology similar tenuous relationships are second only to surveys of college students in domination of the field.

Astrology claims where a group of stars were thousands of years ago, and thus how they appeared in the sky the day you were born, somehow impacts your personality. It is not just crazy superstition, it requires ignoring even obvious things like that you may have been born under a different astrological 'sign' in India than the US, if you believe in astrology you believe whatever mumbo-jumbo is attached. And that is the problem in this paper. The only people not scratching their heads over this claim are the authors are fellow cognitive bias campers.

To start with, US political camps share very little in common with Europe or Asia (1) and nearly nothing in common with each other. A San Francisco progressive tech bro and a New York City liberal cop both vote Democrat, but have nothing else in common. Are Americans a different species than Europe? Are Europeans who don't want to wear masks overwhelmingly US Republicans?

Next, this brand of pseudoscience partisan framing was debunked during the 'Democrats Are The Party Of Science' heyday, the early 2000s. Find anything except climate change and Democrats didn't accept it. Not vaccines, not natural gas, not food. They did believe in ghosts and psychics more, though. Since 2021 Democrats have claimed to be pro-vaccine but that was after 25 years of leading the country in vaccine denial via philosophical exemptions by an order of magnitude over Republicans. Back then we even got weird claims like liberals have prettier daughters, not to mention are just smarter or they'd be Republicans.(2)

The correlation arrows in all these cases are all over the place. They claim their evidence is that those with narcissism who decide to not wear a mask are more likely to tell everyone why, for example. What tedious cultural evangelist group doesn't drone on about it? Have the authors never met anyone on a cleanse, or a vegan, or someone who does P90X?(3)

That's the big problem with the paper; it's just a convenient belief, political fashion hoping to wrap itself in the flag of 'science.' Journalists love when their political proclivities are validated by science but this is not it. Qualifiers like "appears well suited" and "theoretical connections" in science have a great deal of power, but in a humanities paper like this are just a way to have anything mean anything.

Which means it means nothing.

(1) NPR called Japan's longest-serving Prime Minister a "divisive arch-conservative" - that is U.S. left-wing code-speak for Neo-Nazi - the day he was assassinated. Even though he had run the Liberal Democratic Party and was a Keynes-ian economic believer. To government-funded NPR employees, whose donors are overwhelmingly rich and Caucasian, because he loved his country he was a "nationalist."

Yet brutal mass-murderers Yassir Arafat and Fidel Castro also said they loved their people, and those two were respectively deemed “a freedom fighter" and a “prominent international figure” by NPR. 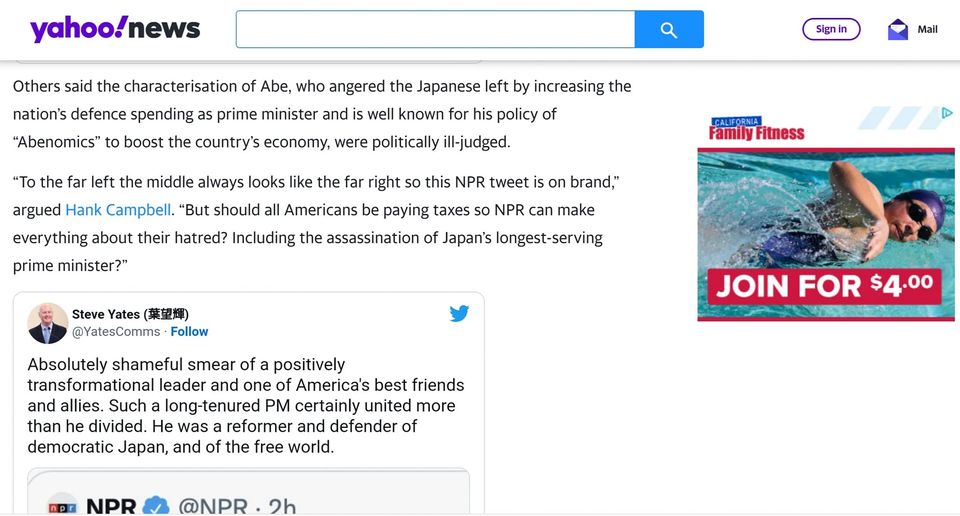 To their credit, after my criticism was included in numerous articles blasting them, they softened their stance and only called him an “ultranationalist.”

There is no compelling reason why 100 percent of taxpayers are forced to fund an "ultrahostile" media outlet that represents maybe 2% of the country.

(2) At least Professor Ron McClamrock of SUNY-Albany didn't try to put some fake evidence-based veneer on his bigotry. “Lefties are overrepresented in academia because on average, we’re just f-ing smarter”

Academia is now even more prejudiced against conservatives, and still think that they are smarter because they block out differences in thought. Find a prominent progressive in the science academia orbit, the kind who is often called on by NPR or Mother Jones, and you will find someone who denies the science behind nuclear energy, hydroelectric power, and modern agriculture, but bashes Republicans routinely for endorsing 'fossil' fuels like natural gas. And endorsed when Democrats tried and failed to get warning labels place on non-organic process foods. That is not acceptance of science, they are just in a war of extinction on people different from them.

(3) The "Karens" so popular as pop culture memes now are overwhelmingly Democrats, as are nearly all the richest counties and states in the US, not mask-denying Republicans. "Karens" default to centralized authority when they demand to speak to a manager. They live in places like Manhattan, right next to Central Park, or in San Francisco.
Science 2.0
More Articles All Articles
About