Hank Campbell
Dr. Mehmet Oz became famous thanks to a celebrity worship culture that progressives embraced in their desire to believe in alternatives to medicine. Just a few years after President Clinton trashed nuclear science in America, removed supplements from any real FDA oversight, and showed his love for alternatives to vaccines by throwing money that could have gone to science to the National Center for Complementary and Alternative Medicine so they could continue to find out placebos can't replace medicine, Oprah Winfrey turned Dr. Oz into a national sensation.

In 2003, he had everything coastal elites and their aspirants wanted even if most of his claims were nonsense - a real doctor, not a naturopath or a homeopath, selling alternatives to Evil Big Pharma from his office in Manhattan. A wealthy white dude. 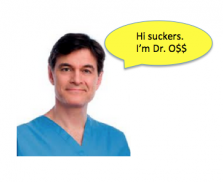 A lot has changed in culture since then. The same companies that were dismissed as Evil Big Pharma are now embraced by the left as solving the COVID-19 problem, and Dr. Oz is not working from New York City any more, he's sort-of moved to Pennsylvania. He created a mailing address to run for the Senate in that state.

Will Pennsylvania embrace him as he carpet bags in from New Jersey while also suddenly a Republican? While the big cities of the state are solidly Democrats, they are not Manhattan or San Francisco Democrats, the culture is blue collar. And a lot of older people are Republicans.

Then there is the problem of his past. People who are opposed to all science, like anti-GMO fifth columnists, are still solidly anti-vaccine, but many groups who once claimed organic food "built natural immunity to disease" aren't claiming it when SARS-CoV-2 is now in its 15th mutation. They're still overwhelmingly the Whole Foods crowd but they suppress their anti-vaccine sentiments because they don't want people to think they're Republicans. Dr. Oz had common cause with them this entire century.

Whole Foods is not what you think of when you think of Pennsylvania. Dr. Oz can move to Pennsylvania and switch parties to run as a Republican (hey, that worked for Reagan) but it is harder to escape his past. The man sold Alternative Toothpaste, he advocated for warning labels on GMO foods and when he was finally heckled into hiring a fact checker for his TV show he hired...an anti-GMO activist. That is like hiring an astrologer to fact-check your segments on astrology. Oh wait, he endorsed astrology too. The man even had Yogic Flying Instructor Jeffrey Smith on his show to talk about how Science Is A Corporate Conspiracy. And the lawyer who runs the dark-money funded site Sourcewatch. And Mike Adams, who has now been banned from basically all social media because he is such a crank.

There is still time to get one for Christmas!

You might think journalism, with its overwhelming Democratic political party representation, would oppose him now that he is a Republican, but I bet he will get the soft treatment. We have to think big picture. He can do a lot less harm to public trust in science in the Senate than he has on television.
Science 2.0
More Articles All Articles
About