Bernie Sanders Says He'll Release Info On Aliens If Elected - Which Party Is More Likely To Believe The Truth Is Out There?
By Hank Campbell | August 9th 2019 08:57 AM | Print | E-mail

Hank Campbell
On The Joe Rogan Experience podcast (which you can view a video of below, because podcast doesn't mean what it used to mean) Senator Bernie Sanders pledged to release government information about aliens. He says it's an issue for his wife.

It's also an issue for Democrats. When I wrote Science Left Behind with Dr. Alex Berezow in 2011 there was a lot we had to leave out. Why, I had wondered in articles in 2008-9, did our Scientist In Chief in President Obama surround himself with UFO believers, a vaccine denier, and a guy who thought girls couldn't do math?

Well, there are a lot more beliefs that skew more toward one party or the other than vaccine denial and global warming.(1) Some stuff too ridiculous to take seriously. Like that aliens are among us and government is keeping them hidden. Sanders was clearly having a little fun but he's on message for his voters. If those voters are in 2009. (2)

The last time I wrote about this at any length, when it came to reincarnation, psychics, astrology, fortune telling, ghosts, and communicating with the dead, Democrats were way more likely to believe than Republicans.

And not by a little, 2:1 in most cases. Only in cases of religious experiences was there parity. 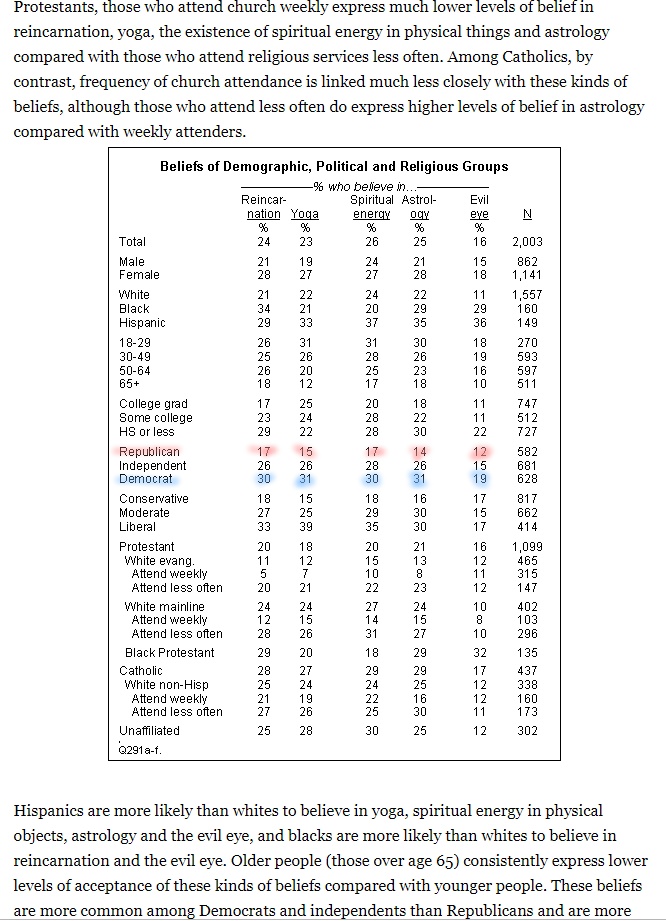 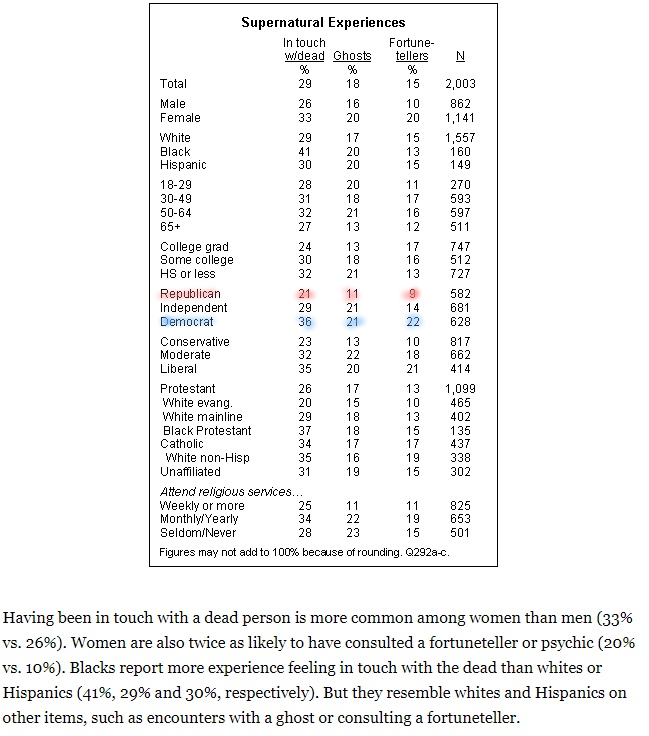 It seems likely that this would still be a schism between the science acceptance of the left and right in the U.S. on these issues so I went to Pew for the latest data and...couldn't find any. They have done more recent programs on things like which religious people also have some New Age beliefs but they have not updated their political skew on astrology since then.

Maybe there is no interest. Leading up to 2008, Democrats had convinced themselves they were more pro-science than Republicans. That may have meant it was the perfect time for Pew to want to get to the bottom of which side is more likely to believe in ghosts. I noted then that the if you were going to find a nexus of Democrat voters, Whole Foods was a fine place to start. And ditto if you wanted lots of misinformation and disinformation beliefs related to science and food. While it's still mostly Democrats who believe regular food is a Vast Science Conspiracy (so it won't be a shock to think government is covering up aliens too) food culture has changed a lot in the last 10 years. Millennials have taken over, regardless of political affiliation they want natural food in microwaveable pouches, as long as it says unprocessed and recyclable on the label. All of the rules have been thrown out.

If the price is the same, why not get the health halo of organic food? It's in gas stations now, it is a $100 billion Big Food business, so large that small organic farmers can't even get into co-ops because they have been muscled out by large growers.

A lot has changed, maybe so much it's not worth it for Pew to survey for differences in beliefs about astrology. There might not be any.

One thing still hasn't changed. There are no aliens being kept hidden. Which is why I liked that Senator Sanders offered to release the data. Like buying organic food at the same price as normal food, it's a harmless intellectual placebo that may make 29 percent of people feel better.

It's only if he decides to put people with wacky beliefs on his transition team that we need to worry.

(1) The difference in acceptance of psychics, astrology, and HAARP didn't make the editorial cut but many of the issues we feared then did come to pass. Vaccine-preventable diseases became a scourge and just like data showed, vaccine deniers did not target right-wing moms, they featured celebrity Democrats to convince other Democrats to buy the alternatives to medicine their clients sell. On food and energy science it was the same, the left out-denied the right, who instead won on climate change and evolution.

(2) Or Hillary Clinton In 2016, when she promised New Hampshire's Conway Daily Sun News that she would "get to the bottom" of this UFO stuff, saying we may have been visited already by aliens, but "we don't know for sure."  Was she kidding? It was always hard to tell.
Science 2.0
More Articles All Articles
About