No Media Gatekeepers Needed: Over Half The Public Now Regard Scientists As Good Communicators
By Hank Campbell | August 19th 2019 09:58 AM | Print | E-mail

Hank Campbell
In 2006, when Science 2.0 began, it felt like the world was ready for a writing network composed of scientists. There had already been two attempts, one failed and one wildly successful, albeit more focused on cultural issues than science.

I argued that the science audience not did care about as much about the beauty of the narrative and the punctuation and the structure as much as they cared about the science. So an idea I'd had since hearing Tim O'Reilly coin the phrase "Web 2.0" came to life and Science 2.0 was born.

It turned out that scientists were much better communicators than even I had expected. I've been in two occupations the public regards as somber and not much fun, the military and science, and in both cases in relaxed settings the creativity, humor, and intelligence were obvious.

The struggle was getting that in published form. I found that a lot of scientists sat down at the keyboard and immediately transformed into Science Journal Mode. Sometimes in casual conversations about articles I would hear something terrific and stop them and say, "That. Write that as your first sentence. You have it way down at the bottom but you don't have it stated as perfectly as you just did."

So the writing got better. In the early days of blogging, some thought the easy route to popularity was rants about religion and Republicans, and they wanted no part of that. On the other end, great writers like Jerry Coyne and Sean B. Carroll and Don Howard were probably daunting to most. Still, many took up the challenge and it may have seemed like a slow creep but that paid dividends.

Confidence in science has risen to where it is once again on par with the military and well above media, including the science journalism that science blogging replaced. Since 2016, those who have "a great deal of confidence" in science is up over half. That is thanks to the new generation of scholars - that's right, Millennials - who suffered ''attitude of crisis'' fatigue and began to "ask the awkward questions" of their own side that journalists had forgotten how to do.  Evolution and stem cells and climate change were not the only denial out there, to anyone who chose to look it was clear that the science of vaccines and food and chemicals and energy was being denied by their own side. So they tackled it from the inside and public trust is going up.

This new generation don't need a gatekeeper between them and the public any more than they need a media company putting music on a CD. It's certainly easier to have a built-in audience at a non-profit, like here, but not essential. Every week there are great new writers who just start anywhere they want, like Forbes or Medium or Wordpress or whatever.

The confidence is becoming clear

It's no surprise in the recent results that 89 percent of the public think of research scientists as intelligent but that they also regard scientists as honest, at 71 percent, is comforting. 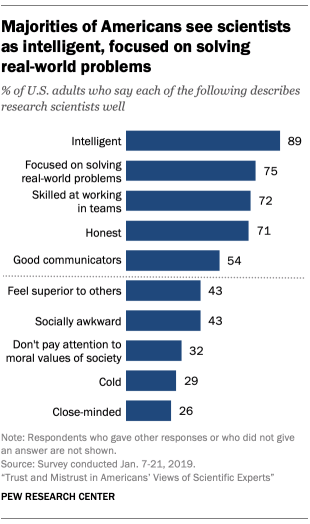 Most compelling to me is that, in a switch from when the Science 2.0 era began, 54 percent of the public now consider scientists good communicators while only 43 percent now say scientists are “socially awkward” and “feel superior to others.” A generation ago scientists would not be considered great communicators, the default would be some mix of Spock and James Halliday from Ernest Cline's/Steven Spielbeg's "Ready Player One."

The old perception of scientists was that they were stiff and uncreative, with a Powerpoint slide fetish and a need to say things like "on the other hand" about every subject. The more scientists knew, it was said, the less likely they were to be able to provide a straight answer.

READ ALSO: Will Somebody Please Find Me A One-Handed Scientist??

That is less and less the case. Scientists now understand that if they don't tell their story, the story will get told for them. Last week I wrote about a pilot study using the ketogenic diet for migraines and how the conclusion did not match the actual data, much less the provocative claims for media. The first author objected, but he did not write a rebuttal nor did he write an article himself, he had abdicated his work to journalists thinking that was a victory. In the short term, perhaps it was, but in the long term the diet he espoused (ketogenic) is going to be harmed because of media claims of exaggerated benefit that were produced with his consent.

There are other challenges that remain, like partisanship. Not the difference between political parties, but how these results are going to be weaponized by the same groups who caused loss of trust in the first place.

The new survey results show divides between Republicans and Democrats and people in journalism and in academia with an axe to grind will frame that to their goals. But it isn't that simple.

Framed realistically, that more Republicans than Democrats see less real-world problem-solving in basic rsearch means that Republicans actually understand basic research better. Academics who want to be in basic research specifically don't want to create a product, they chose to study round worms or fruit flies to make an exploratory study that will lead to applied research and maybe an end product some day. Since so few Republicans can get into the faculty of universities in the last 25 years they may also still think science is a solo endeavor, some theoretical physicists using math to write about time travel, rather than a particle collider where thousands of scientists participate. That 94 percent of many academic science departments is now Democrats may be why Democrats recognize that scientists are good communicators more than Republicans do.

A lopsided prevalence of Democrats in academia may also be why they feel academic scientists are more socially awkward and have a superiority complex. Democrats see a lot more of them, and psychologically we tend to remember outliers and academia has a lot more older researchers, who may be more of the stereotype.

So it looks like Democrats see more positive qualities, but on the nearly 70 percent of science not funded by government for universities, trust among Democrats collapses. They are far less likely to trust scientists in chemical companies, agriculture, energy, or medicine.

It's easy to frame these results any way we might like but from the perception of someone running a science outreach non-profit, there is a non-partisan, spin-free good sign - people increasingly regard scientists as their own best outreach venues - and hopefully it will inspire more scientists to be trusted guides for the public.
Science 2.0
More Articles All Articles
About