Hank Campbell
Though nearly everyone recognizes that smoking cigarettes is a known carcinogen, many marijuana users think marijuana smoke is safe. They may not realize it is inhaling the smoke, not that the smoke is from one plant or another, that is the worry. Nicotine or THC is as harmless as caffeine, but when combusted in a leaf with paper and inhaled, everything becomes harmful. Including marijuana plants.

A new observational paper is concerned that 27 percent of marjuana users think secondhand marijuana smoke is safe, and while there is a popular belief that secondhand smoke is a carcinogen just like smoking, epidemiology papers hoping to show that have been trapped in the 'just correlation' zone. In a world where we can detect anything in anything, and therefore link anything to anything, it is always possible to suggest a link, and infer cause and effect in the press release to get corporate journalism thinking about how many views the headline might get, but science is often missing. It is why we have asked the NIH to mandate a giant red EXPLORATORY watermark across every taxpayer-funded study that uses correlation, especially if correlation is the basis for a public health claim. Like in this paper. Especially if the authors paid JAMA to publish it, which means it did not go through real peer review.

If you want to suggest a link, there is no easier method than small micron particulate matter. It sounds like science, particulate matter in lungs is bad, but the small micron particulate matter craze was invented in the 1990s, and like 'endocrine disruptors' has been mostly fodder for trial lawyers. Epidemiologists still love to write papers about both, the same way epidemiologists gave us ivermectin and hydroxychloroquine and the belief that taking your mask down between bites of food in a restaurant was helping anyone, but scientists don't like what such claims due for science literacy. And to public trust in science. The doubt many had about COVID-19 is directly correlated to the weekly Scary Chemical and Miracle Diet claims made by epidemiologists every week.

Real particular matter, 10 microns in size, PM10, is the smog and pollution you see in places like Beijing. That is a known carcinogen. Yet as air got cleaner in America, an effort began to 'define pollution down' and small micron particulate matter, PM2.5, suits the bill.(1) Since it is 1/4th the size of real smog there is obviously a lot "more" of it, so much that even during the height of the COVID-19 pandemic, when fewer cars were on the streets of LA than in 50 years, air quality did not go up. It couldn't, even though actual smog was far less prevalent, because the standard has become 'invisible' particles you need an electron microscope to see. And they are always around.

PM2.5 is why secondhand marijuana smoke is being listed as a concern in a new paper, and it's why you can relax. Like cigarettes. marijuana is still annoying, it still stinks, but it is not giving you cancer if someone nearby is doing it.(2) They even say it is harmful to people around you when the smoke is filtered through water, like bongs. 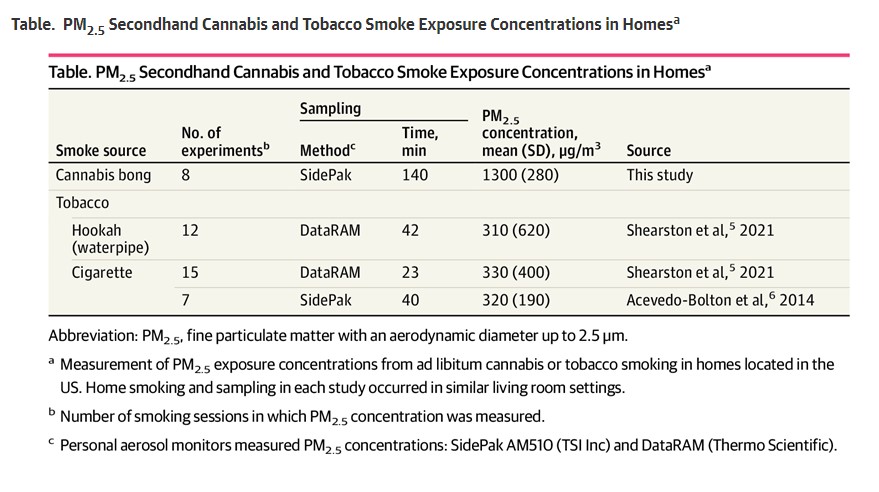 This result would actually be interesting, if it didn't mean either this paper or the one they link to for comparison needs to be retracted, because it is impossible that it is so much higher than cigarettes. If this is accurate, 25 years of claims about PM2.5 are even sillier than scientists say they are because both the hazard and risk are so much lower for water bong smoke. Good scientists know you need to falsify your own hypothesis. Bad ones see an impossible result and apparently get jobs editing pay-to-publish pieces at JAMA.

They used a portable aerosol monitor - weirdly one that hasn't even been made in 6 years, so maybe they rented it - with 1, 2.5, and 10-micron sampling. It wasn't a controlled experiment, smokers did whatever they wanted, just the windows were closed, and they measured for so many varying periods of time afterward it made little sense to call it a "method." One was 12 hours, did someone fall asleep wearing the thing?

Anyway, they found that after smoking background levels of this 'virtual' pollution were much higher. They then again say "scientific research" found that secondhand smoke is a carcinogen but that still remains untrue. Is it tedious, annoying, and bad for people prone to respiratory distress? Of course. So is walking through the perfume department at Macy's. It's not giving you cancer, or there would have been a new $26 billion Master Settlement against cigarette companies by now.

You might as well be worried about getting cancer due to from the particulate matter from bacon because you can smell the bacon. It is not science, but it is far too much of what is epidemiology these days.

You shouldn't smoke marijuana or anything else. But that doesn't mean you are giving people around you cancer just like if they smoked it themselves, regardless of what Berkeley epidemiologists want to "suggest."

(1) There have been efforts to make PM1 the new danger, but in the mountains of Montana the pollution map would always be at least yellow and that seems to be too much for even the most progressive epidemiologist inside the ultra-wacky National Institute of Environmental Health Sciences to stomach.

(2) The epidemiologists in the paper nonetheless claim secondhand smoke has "causal links to cancer, respiratory and cardiovascular diseases, preterm birth, and decreased immune function", which tells you everything you need to know about the lax peer review in their pay-to-publish group. None of those claims are real, they are just correlation. Like that autism is caused by organic food, because the curves of both started going up in 2000.
Science 2.0
More Articles All Articles
About