COVID-19 Has Brought 'Thirdhand' Smoke Epidemiology Back From Its Science Grave
By Hank Campbell | September 18th 2020 06:43 AM | Print | E-mail

Hank Campbell
With COVID-19 and worries about the SARS-CoV-2 virus keeping millions of people at home, activists and lawyers are hoping to resurrect worry about a problem dismissed by scientists as a money grab; third-hand smoke.

Smoking is a carcinogen and a risk factor for many diseases, that science is settled, but after extracting hundreds of billions of dollars from tobacco companies in a settlement for a real killer, lawyers hoping for more began to claim secondhand smoke also killed. Obviously, any vapor can be worrisome for people with respiratory issues, Lysol or perfume can send asthmatics running from rooms, but an exhaustive analysis found no deaths from secondhand smoke. It was simply just as risky for asthmatics as anything else and really annoying for the rest of us.

A dead end for secondhand smoke did not stop third-hand smoke claims, the belief that particulate matter from smoking left behind on furniture could cause cancer, from following.

You can always tell when you enter the home of a smoker by the smell. All of the air freshener in the world won't fix it. You can also tell when you enter the home of someone who heats with wood or has a lot of dogs. Does that mean the smell left behind by wood smoke or dogs gives you cancer? No, and that is why scientists dismissed third-hand smoke as not only being junk, it risked undermining efforts to stop the real killer, smoking, by making good studies look ridiculous by association with manufactured epidemiology. It's just a smell. I hate the smell of bacon coming from someone's else house, but I like it when I create it. I hate the smell of cigarette smoke, but not because I have some weird belief it will give me cancer.

Yet they think the ability to detect any pathogen means it also causes pathology, and that is nonsense. We can detect parts per quadrillion in 2020, which means we can detect anything in anything. There is no zero level of exposure to any chemical at that level, so being able to detect a particle is going to happen. What should not happen without being challenged is claiming that a trace particle left behind on a piece of furniture is equivalent to millions of such particles inhaled into lungs in high quantities 40 times a day for 20 years. That is ridiculous.

It's lawsuit bait, not science.

To make the case for a third-hand smoke pandemic, they looked for traces of nicotine. That is an indicator of tobacco, obviously, and smart strategy because lawyers can also use the paper to sue over vaping. A twin-pronged approach to getting a lucrative expert witness contract. Nicotine, though addictive, is actually harmless in anything approaching normal amounts in humans. Someone even tried to commit suicide with it once but despite taking 300X the LD50 amount, nothing happened. They got jittery, just like if you drank 40 cups of coffee. But juries do not have to consider science in their decisions and most of the public conflate nicotine, the addictive chemical in cigarettes, with smoking, so that is important framing by the paper. 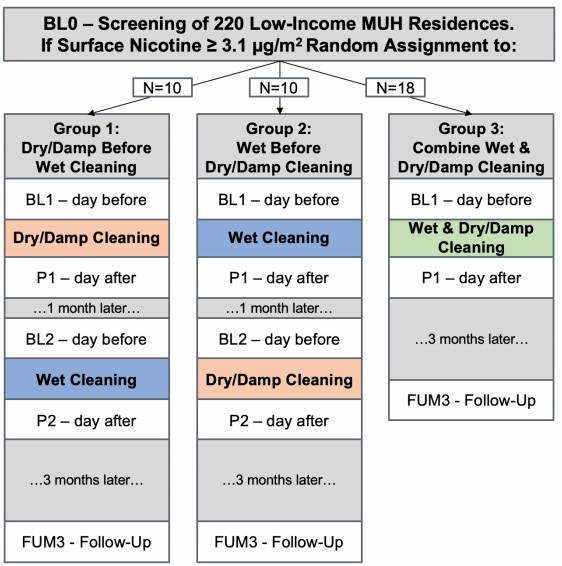 With all different types of cleaning, they could still detect nicotine. No really shock there, you absolutely do not want to shine a black light in that hotel room you sleep in, but they then invoke the fact that it has been statistically linked to harm - while they ignore dose. That is just bad science, the same as claiming that an organic strawberry with an E. coli molecule is the same as eating one with cow manure still on it.

To bolster their case with even more inference, the academics note in their press release that the state of California lists nicotine as a hazardous substance. That is true but also irrelevant. Californians are forced by law to endure warning labels for 900 different chemicals on hundreds of thousands of products due to abdicating their decision-making to a French statistical group, the International Agency for Research on Cancer, which also claims bacon and tea can be linked to cancer if they torture data long enough. You cannot visit any business in California without seeing a cancer warning label. It's meaningless when a Walmart even has a sign outside each store saying by even entering California politicians think you will get cancer.

This picture was taken by a frustrated doctor in an oncology ward in California. The one place where you know people already have cancer has a cancer warning label...on a white board they use to talk to patients about their cancer.

It isn't just third-hand smoke that is a manufactured particulate matter worry, misinformation and disinformation about absolute and relative risk bleed into other areas, and do a great deal of harm. Once smog, like smoking an actual killer, was basically gone in the United States, activist epidemiologists began to link PM2.5 to disease instead of smog, PM10. Particles so small it takes an electron microscope to even detect them were supposedly killing us. Yet when studies showed no actual deaths from PM2.5 they changed tactics and began to claim it might be linked to breathing issues for people with asthma.

Yet our air is cleaner than it has been in 150 years.

Ignoring the science, it is now common for local weather meteorologists to put up maps showing red or orange air pollution because they are told by government use PM2.5, though if you look outside you can't tell the difference. Talking heads on TV just shrug their shoulders and say government gave them that map.

The cost to taxpayers has been hundreds of billions of dollars in higher costs and it hasn't saved a single life, or added even a year of life onto anyone. All it does it lead to claims that grilling a hamburger is more dangerous than inhaling fumes from an 18-wheeler, and a lot of other nonsense by people in universities hoping to get into the New York Times.

One worrisome after-effect of COVID-19 is that the public trust government agencies and epidemiologists less than ever. That reckoning was due. Unfortunately, the virus is the wrong thing to do it about, it was the manufactured epidemics and food surveys used to link foods to cancers that should have made us skeptical all along.
Science 2.0
More Articles All Articles
About