Hank Campbell
A new estimate says that of 378 metropolitan areas, many could actually exist on locally grown food - if the local area is up to 200 miles away, which means New York City could claim farms in Delaware, New Jersey, Pennsylvania, Rhode Island, Massachusetts, and Connecticut are local to New York.

Even then, diets would have to change, because progress has meant having diversity and choice, and if locally-grown were really necessary, the population would starve along the Eastern Seaboard and the Southwest of the U.S. And meat would only be for the rich.

Those in less fertile countries would also have to starve, because there would be no exports, and the biofuels that climate change evangelist Al Gore got mandated when he was Vice-President would be gone and that energy would have to be replaced with coal or natural gas. Meat was once a rarity for poor people and that would be the case again, lentils, beans and nuts would be meals, while well-fed epidemiologists tell the public how much healthier they are because some group in France claimed statistical correlation between meat and cancer using papers they refuse to disclose how they chose.

None of this is happening, the computer simulation is truly "academic." Their model does not even adequately control for what farmers and ranchers know; just because an animal grazes on land does not mean it could be more efficiently used for human food crops. Domesticated livestock became the norm for patchy areas because grazing on otherwise unusable land was the only use for it. 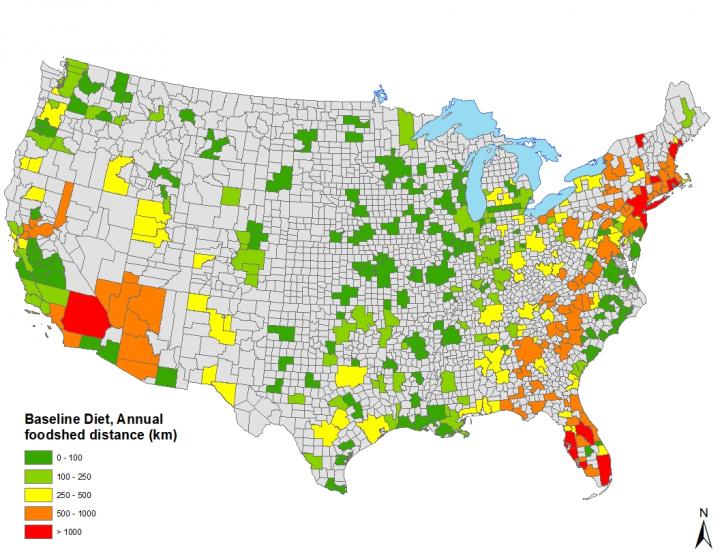 If locally-grown were really locally grown, cities and entire regions would disappear. Unless the definition of locally grown is hundreds of miles. Image: Tufts University

But the big confounder is their generous local area. At over 150 miles, that is not what anyone considers locally grown. Yet they can't be wrong because it is just a marketing convention. If a restaurant says their local area is 500 miles then they can claim locally grown. Yet using a large radius in an estimate is not providing a legitimate model because it proceeds from the assumption that farmers would continue to toil for a modest income rather than people who need food going to them. If the world stopped and locally grown food was a necessity, cities would instead evaporate and we would return to the days of the early 1800s when over 90 percent of the public was involved in food production.

Yet mass starvation is not really what the academics behind the computer simulation worry about, they seem to think it will all work out, they worry more how government could subsidize it and how conservation would be supported. "It would be important to make sure policies for supporting local or regional food production benefit conservation and create opportunities for farmers to adopt more sustainable practices. Policies should also recognize the capacity of the natural resources in a given locale or region--and consider the supply chain, including capacity for food processing and storage," notes Christian Peters of Tufts University. A school which was only able to open in 1852 because agriculture had beaten back Malthusian claims of a few decades earlier - thanks to the scientists who came up with synthetic fertilizer - and we could increase advanced education in the very regions that could not support themselves using locally grown food.
Science 2.0
More Articles All Articles
About