With the U.S. Food and Drug Administration rightly cracking down on sales of vaping devices to minors and U.S. Surgeon General Jerome Adams making a recent statement of concern, media are again repeating claims of an epidemic of vaping among children.

It's not true. The Centers for Disease Control and Prevention have noted a drop in vaping by teens since its high of 3 million in 2015, so there is no reason that 21 percent of young people claim to have experimented with even one are sending our government into a panic. The response federal officials have standardized on could lead to exaggerating a problem we don’t have.

Experimenting with an e-cigarette is not a crisis, it just means policymakers have forgotten what being a teen was like. There is concern that one product, Juul, has become so popular that it’s become a generic term, as Kleenex is for facial tissue, but prior to Juul’s rise the most popular product had a scant two percent of overall vaping revenue. It was only a matter of time before free market principles created a winner. However, the market among young people is not increasing so focusing on a product that keeps people from participating in a $900 billion cancer-causing industry like cigarettes is sending the wrong message. 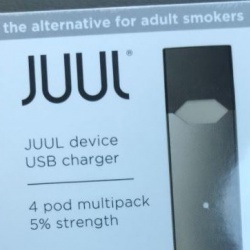 Despite that, U.S. Surgeon General Adams just warned, "nicotine exposure during adolescence can harm the developing brain -– which continues to develop until about age 25."

What can't harm the developing brain? Literally every single chemical or product can harm a developing brain in the right amount. Knowing the right amount for trace levels of chemicals versus harmful levels is why scientists came up with the dose-response relationship and why we now know chugging 13 shots of whiskey all at once or 118 coffees in a row might kill you. The dose-response relationship was formalized in 1927 by British chemist John W. Trevan because scientists needed a way to measure toxic potency of compounds. His "Lethal Dose" amount that would kill half of test animals, (LD50) became the standard for measuring how much of a chemical, given at once, causes the death of half of test animals. Guidelines for harmful levels in humans follow from that.

There is no recorded instance of someone dying from nicotine intoxication. The only example of even an attempted suicide was in 1931, at 500 times the toxic dose, and it failed. The LD50 of caffeine and nicotine are in the same moderately toxic range, but no one can give us a scientific metric for how much caffeine or nicotine “can harm the developing brain” of 24-year-olds. No one can even define “harm”, it’s completely subjective. Cascades of subjectivity are not how government policy should be made. Yet the Surgeon General is not calling out coffee shops and declaring that they are harming the brains of the public, and he is doing it about trace levels of nicotine. That smacks of arbitrary decision-making.

I won't let my teens drink energy drinks any more than I would let them vape or smoke a cigarette or a joint, but can I really prevent them from doing any of that? If they do get addicted to energy drinks I'd like for government not to declare war on tea because it has caffeine also. And that is essentially what they are doing when they make all vaping devices sound as harmful as smoking or claim that the popularity of one device is creating a pediatric disease. Nothing is as reliably harmful for the public as smoking, not gun ownership, not cheeseburgers, not cars, and studies have shown smoking is the one true pediatric disease that will shorten the lifespan of young people so if we keep youth who used to become smokers from doing so at young ages they likely never will as adults.

Claims that vaping might lead to cigarette smoking are statistical vapor of their own. Smoking has continued to decline even as vaping became popular. Smoking is now happening among just six percent of kids, down from nearly 30 percent two generations ago. And that means we will see resulting declines in numerous chronic health issues.

That’s the trend that needs to continue.