Tweet
At a House hearing on vaping this week, there was one lone advocate for smoking cessation and harm reduction products, a huge decline from a year ago when even I testified at FDA to support a new product. Everyone else was solidly against it, and the reason is JUUL.

I have no real interest in JUUL itself, I am not for them or against them or any company in this space, many of the gaffes they committed were just gaffes any growing company might make. I hope they remain available as a smoking cessation and harm reduction tool for smokers, because hype about nicotine aside, they are no worse for kids or adults than caffeine or poker or anything else that someone who wants to manufacture risk will note is addictive.

But I don't like the company and that makes it hard to support them, even when I know they are in the right space.

A lot like Monsanto, where I supported biotechnology and which led to a lot of annoying Ketchum account executives writing me and asking me if I might like to talk to a Monsanto marketing person. Well, I did not. I didn't care the least about Monsanto, I cared about affordable food and responsible agriculture and they happened to be right on GMOs.

Read also: JUUL's Favorability Rating Has Gone Up In Smoke: Of 1,900 U.S. Brands, Only Marlboro Is Now More Disliked

Monsanto set back public acceptance of modern food invoking a bunch of data showing how much better GMOs were for yields and arrogantly adopting a top-down approach to public engagement, where they thought if they hired an ad agency to create a website and annoy a bunch of us by asking us to write there for free while they collected $3 million a year, well, that would work. Except it was a spectacular failure.

That's the approach JUUL has taken. A year ago, any of us could have told them what they were doing wrong, yet they did not want to take advice from experts in the smoking cessation and harm reduction communities when they were on top of the world with $2 billion a year in revenue, they wanted to hire outfits that would play 'yes man' to their marketing teams and who promised they would get the science and media landscape on their side. 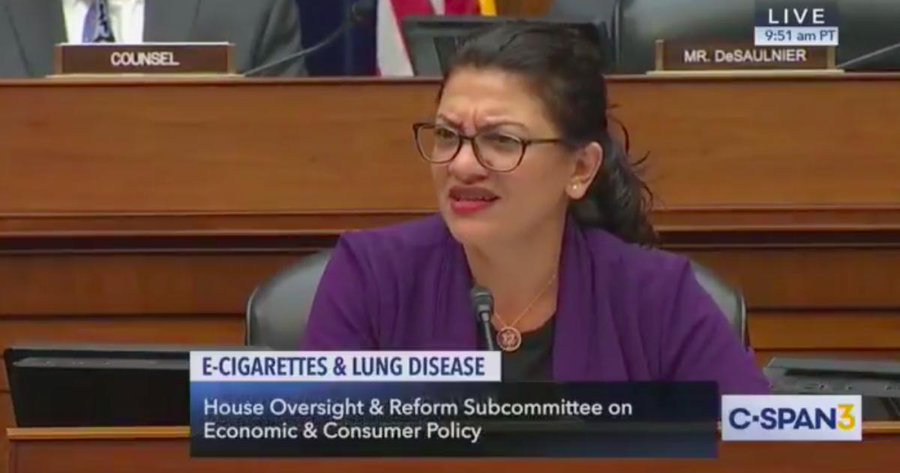 Now they have Rashida Tlaib asking if anyone who supports smoking cessation is "a conspiracy theorist" after claiming she is sure secondhand smoke is worse than smoking. And few are there to defend against such wacky unscientific nonsense ... because of JUUL. The lone advocate for smoking cessation who testified had to be bullied by the members of Congress, overwhelmingly Democrats, who want it banned. That wouldn't have happened five years ago.

Has JUUL done so much harm to smoking cessation that Democrats are siding with cigarette companies and Big Pharma over a grassroots smoking solution that works twice as well?

Read also: JUUL Hammered By FDA For Past Marketing Tactics

Now JUUL are looking at criminal proceedings, and at this Congressional hearing no one wanted to show up to defend smoking cessation lest we look like we might be on their side - the company who just took $13 billion from Altria, the one company smoking cessation people absolutely want to avoid. Word is that JUUL CEO Kevin Burns is even going to step aside to make way for an actual Altria executive to take control. That is a clown car of corporate management.

Look where JUUL strategy has now landed the company. From being unheard of half a decade ago to having nearly 75 percent of the market now, they should be going from strength to strength but instead they have gotten the U.S. Attorney’s Office for the Northern District of California preparing criminal charges while the Federal Trade Commission (FTC) and Food and Drug Administration (FDA) insist they target minors; a no-no in the anti-smoking community since that is Big Tobacco tactics. CDC is the only government group on their case that can be dismissed because they are trying to blame vaping for 500 cases of breathing issues despite knowing those are people putting who-knows-what in their pipes - we all know that CDC has become more like the statistical scaremongers at NIEHS than a science body.

JUUL are so big and such a high profile target that instead of being 'too big to fail' they may be too big for the industry to survive without them. E-cigarettes, the best smoking cessation and harm reduction tool out there, could be eliminated by legislative fiat, which means smoking sticks around that much longer. And there will be one company to blame.