There are several reasons I could never be a political pundit. Much less one of the ilk of Charles Krauthammer, who has earned the respect of everyone, even those who do not like him very much. To be a political pundit of that grade, cast in the mold of Krauthammer, one must be an intellectual product of the eastern establishment, have a lust for analyzing baseball, and be able to take a strong ideological stance in an argument about politics, which goes beyond any normal person’s ability to win or even finish the argument because it requires real knowledge of the philosophy and history of ideology, which no normal person possesses. But, above all, the ultimate badge of honor is to manage the impression of being a self-professed policy wonk. 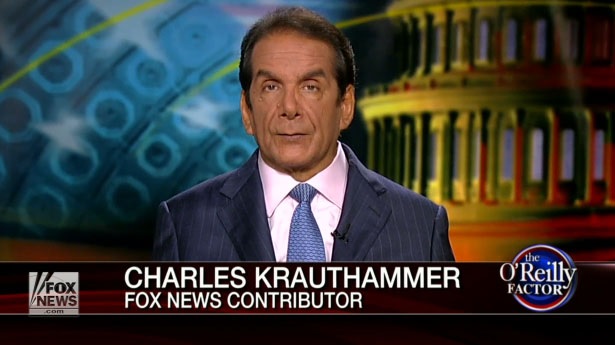 If there is a favorite Krauthammer strategy of argumentation, then it is the assumption that the heights of intellectual punditry in the world of political commentary are achieved by reminding people from time to time that they have no real appreciation of the virtues of policy. This is accomplished, for example, by taking any statement or action by any person or group involved in politics and speculating on it by saying that it may represent what someone thinks or believes but it does not have the imprimatur of policy, it is not aligned with longstanding policy or it does not offer a glimpse of promising new policy directives.

This kind of talk just leaves everyone shut the hell up – every time – next subject.

It leaves everyone stumped and clueless as to how to even begin to reply for a number of reasons, but chiefly for one overarching reason: people in the normal world do not understand policy, they do not know what it is or where it comes from, and they do not know why they should care. Normal people are well aware that policy wonks are obsessed with it, and that State Department officials are professionally committed to being steeped in it for their entire careers – but they have no idea what any of that means. It is just wonk talk to them.

Just as people’s eyes glaze over when scientists start to discuss mathematics, or accountants begin to discuss valuations, normal people tune out policy talk because they just assume it is the professional argot of politics and government, and all everyday people really care about are the pragmatic results.

Consider this recent statement made by Krauthammer as he opined on the contrast between Trump boasting that he had saved jobs at Carrier, and the relation of this accomplishment to … the luminous realms of policy. Alluding to Carrier, Krauthammer writes this in the December 8, 2016 post of his weekly column:

The mini-interventions are working, but there’s a risk for Trumpin so personalizing his coming presidency. It’s a technique borrowed from Third World strongmen who specialize in demonstrating their personal connection to the ordinary citizen. In a genuine democracy, however, the endurance of any political support depends on the larger success of the country. And that doesn’t come from Carrier-size fixes. It comes from policy — policy that fundamentally changes the structures and alters the trajectory of the nation.

In this context, policy – and I am talking about the kind of policy that fundamentally changes the structures and alters the trajectory of the nation - has the role and function of fairy dust.

In the world of Krauthammer and other world-class political pundits, policy is something that comes from ethereal realms not understood by mere mortals, and once fatalistically attained by elite protagonists in high-level Shakespearean dramas, it is issued forth,implemented, applied, and then big things begin to happen almost magically.Krauthammer wants you to think that policy is not something that could ever come out of the mouth of a pompous demagogue like Trump.

More importantly,Krauthammer wants to educate you to understand that policy could never be issued forth from the mouth of a rude, crude politician in the throes of transitioning from the campaign trail to taking public office for the first time – especially one that Krauthammer does not like. Krauthammer wants you to know that that is the real power of policy. Trump is still a wannabe in Krauthammer’s world. Trump is still not capable of cognizing and manifesting policy. Too bad people like you and me cannot understand it because apparently when you get it, everything else becomes so simple.

Policy is like rain,we know what it is, but not how or when it will arrive, and it will change the appearance of things but not always in ways that can be guaranteed or even predicted. For example, the various departments in a federal government each have regulatory policy instruments, procedural policy instruments, and institutional tools of policy development.

The most powerful substantive policy instruments are regulations, such as fines or limitations placed on certain areas of activity. For example, the issue of cap and trade, and the imposition of fines for carbon pollution, are attempts to impose substantive regulatory policy instruments to implement what may be referred to as a green, climate change, eco-policy.

Procedural policy instruments are attempts to inject protocols and routines into institutions that will result in significant changes. For example, at the 2016 Paris Agreement, it was agreed that all nations would comply with the standards of the Paris Agreement voluntarily. There may be no substantive fines associated with it, but the new procedural policy once routinized is designed to shame actors into compliance by using a mutually agreed upon honor system based on self-monitoring.

Institutional tools of policy development focus on the development of government agencies. For example, in 1970, the Nixon administration created the Environmental Protection Agency as a department of the federally government specifically tasked with spearheading policy implementation for protecting the environment.

The Nixon administration also opened the doors to diplomacy with China, and in so doing enacted the One China Policy.This is a famous example of foreign policy, but isn't it merely so much rhetorical bologna to people who are not afraid of China? You might say that policy can start wars. But, that only means that either rhetorical bologna starts wars, or policy is ultimately a euphemism for political domination. Ambiguously, we may think we know what the word policy means, but we will never be sure how it may be variously interpreted and implemented at every turn.

A policy is just a branded idea for how we do things around here. However,policies as politically branded ideas, do not operate in a vacuum. They operate in a complex context. For example, there may exist a department with a policy goal, but by cutting the budget of that department, the goals may be hampered.So, policy is a political animal that lives a political life, and its existence is no assurance of its effectiveness. Consider the very micro level question about the various levels of policy and their instantiation: once these are accomplished who makes decisions to move within or around these rules in favor of or against the policies they represent?

On a more macro level, there is the question about how policy motivates actions beyond the departments,regulations, or principles that defined it? For example, how is policy integrated or separated out from larger military commitments, and financial commitments? And how is Krauthammer referring to policy in the above statement?Regarding all the levels and instantiations, the confusions and machinations,of policy, exactly what version of policy did Krauthammer have in mind? Was he talking about regulatory instruments, procedural instruments, institutional instruments?Was he talking about military policy or financial policy? Was he talking about nascent ideas that are picking up steam as branded political ideas?

Or was he just mashing it all up into one big amorphous glob of well-you-know-what-I-meant policy wonk talk?

Policy can only be forged in a two-stage process that is always experienced in the same way.

[1] Policy begins as an idea, but it is an idea that clearly communicates a value judgment about the normative order– what is right, true, and good – and it is implicitly sanctioned as being politically correct;

[2] Once an idea for a cause takes hold, policy becomes a set of guidelines for bureaucratic implementations designed to further that politically correct cause.

In government, a recognizable set of policy values and bureaucratic commitments in support of those values may become framed as a doctrine. That doctrine may then be linked with an individual.

But the whole thing started off with an individual, and then a set of individuals, collecting around a value, in support off that value. Fueled by claims to political correctness, it becomes a celebrated cause and an official mission. It gets described with big words like policy and doctrine. Yet, to imagine that it ever was anything more than an idea that came out of someone’s mouth is to try to make something quite profane into something quite sacred. There is nothing sacred about policy. It does not come down from on high like manna from heaven, visited upon those chosen few who are selective enough to get it. Policy is just a fancy word for a politically correct idea that has become a favorite cause of current governance.

It does not come from a higher place, only a higher class of power elites who happen to have power at the time.

In other words, policy starts as an opinion voiced by an individual. As it takes on steam and becomes the basis for bureaucratic governance commitments, and eventually it becomes recognized as policy, and then the stuff of which doctrines are made – but it is all shades of grey. To imagine that policy is larger than individual life is simply to focus on the endgame, the end result of a powerful person making a powerful,opinionated statement about what should be considered right, true, and good.

In retrospect, when looking back over several years of political goings on, it is easy to lift policy above the fray and imagine that it is somehow lighter and cleaner than the individuals who uphold it. But, policy does not exist over and above the mouths of the people who espouse it. It just takes on a larger-than-life aura once it has been implemented and succeeded in changing people’s lives for better or worse. Policy itself is just as ambiguous, wrongheaded, confusing, and emotionally based, as all the people who made it up in the first place, and fought like dogs for their party’s policies and doctrines to win.

So, the next time Krauthammer implies that Trump’s words are braggadocio and do not carry the gravitas of policy, someone might remind him that Charles Krauthammer was a nobody before people knew who he was, and the legend of Krauthammer is only something that happened subsequently, over time, in direct reaction to the words issuing forth from his opinionated and unassailably brilliant mind.