This statement is trivially true. What's controversial is (1) the idea that KIC 8462852 has transits that occupy a stable and structured orbital configuration, and (2) that someone would dare talk about periodicity when there are no widely-accepted transit repeats. That's why the 24.22-day pattern is not generally treated as a thing that exists for analysis purposes, and why any apparent confirmations of the 157.44-day base period seem to be viewed as chance findings.

I think it's useful, nonetheless, to try to figure things out and make testable predictions before there are 3 indisputable occurrences of every transit. Plus I think a theoretical model will be required regardless.

I wrote a script that calculates the error of transit intervals, as seen by an observer at an arbitrary vantage point.

Around March 26, 2018, a KIC 8462852 dip was picked up by multiple observers, and it was the deepest yet observed from the ground. This is how Dr. Boyajian's team depicted it using LCO network data:

This is how Bruce Gary, who had been unable to observe some days due to bad weather, depicted it: 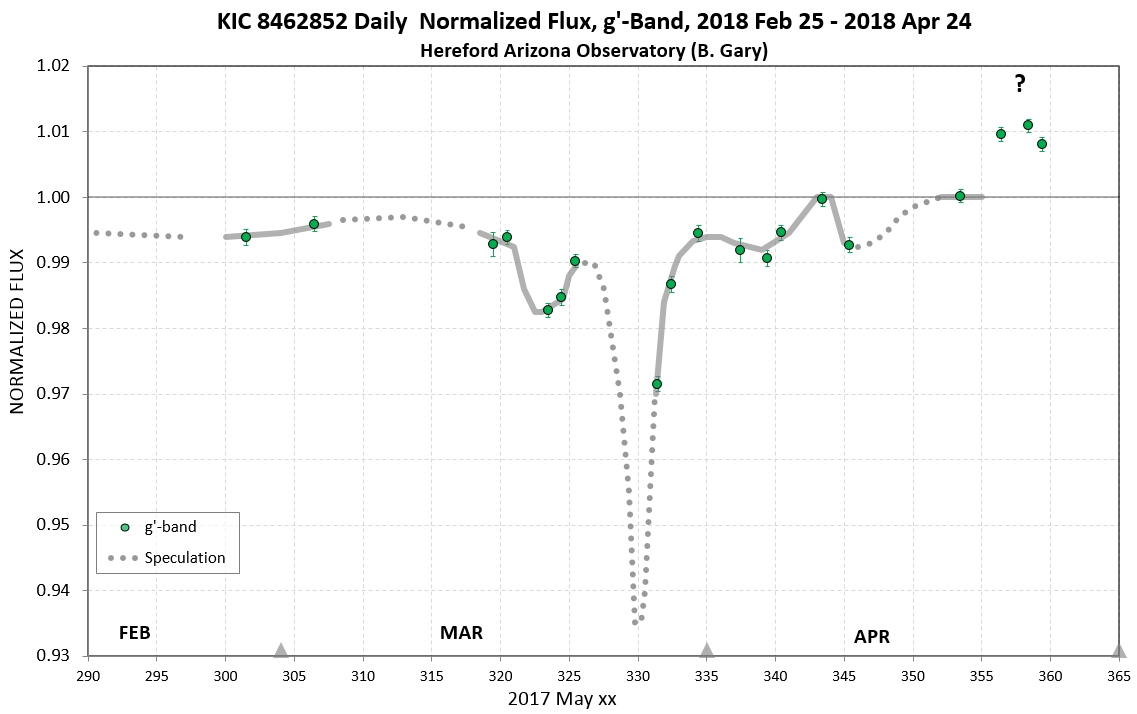 There's an interesting brightening phenomenon Bruce Gary has been documenting in the last several days, but that's a topic for a different time.

I checked which orbit between 3 and 30 would best fit Evangeline under the model previously discussed. It's orbit 11:

The fit is not as good as one would hope. Under the assumptions of the model, Evangeline showed up a couple days too early. Perhaps our base period is slightly over-estimated (and there are apparent transit repeats which also suggest that) or the alignment angle is slightly off.

Note that in orbit 11 Evangeline would've missed the Kepler mission. Regarding Caral-Supe, I'm inclined to treat it as a companion of Evangeline for the time being.

I'm making the following claims about what I consider to be the 3 primary transits of KIC 8462852:
References