You may have recently read some extraordinary claims that total sperm count has dramatically declined among “Western” men and that endocrine disrupters - but only the synthetic kind, not natural ones - are the reason. The extraordinary evidence is lacking.

Scientists from the Harvard GenderSci Lab are putting the brakes on the alleged “apocalyptic” trends in male reproduction.

The peer-reviewed Harvard paper, by Marion Boulicault, Sarah Richardson, and colleagues, re-evaluated the meta-analysis by authors Levine et al. in 2017 and found significant inconsistencies and biases in the methods and assumptions used by Dr. Shanna Swan and colleagues to make their finding.

Boulicault and colleagues also propose a more plausible framework for interpreting population trends in human sperm counts that they believe offers “a more analytically rigorous, empirically driven” framework for interpreting population-level trends in human sperm counts than that posed by Levine and colleagues.

Importantly, the new examination of the same data and background literature as used in the 2017 meta-analysis casts doubt on the conclusions reached by its authors. 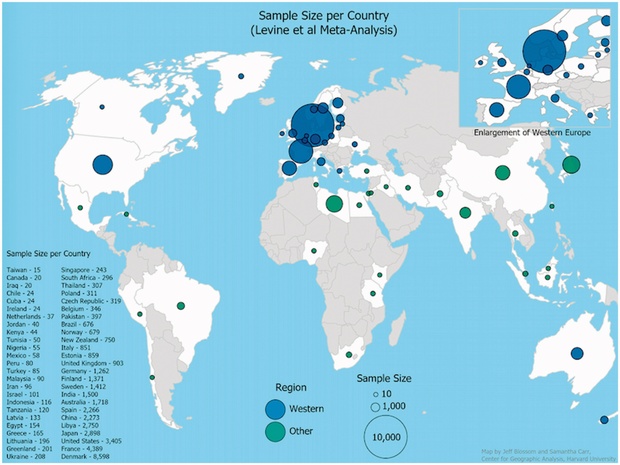 The number of sperm samples per country over the period 1973–2011 included in the 2017 meta-analysis. The global coverage is mottled and asymmetric and Levine et al. concede that sperm count in ‘Other’ countries is sparser than ‘Western’ countries but don't acknowledge inconsistent data in Western countries. Instead of applying to all men it can really only describe general population trends in sperm count within Denmark.

The new paper points to a number of things to consider before conclusions on decreases in sperm count or male fertility can be drawn.

As the Harvard authors conclude, “researchers must take care to weigh hypotheses against alternatives and consider the language and narrative frames in which they present their work.”

Objective, sound science should drive decision-making and public discourse. Presentation and interpretation of scientific studies must be done carefully to avoid making provocative yet unfounded public claims, especially when a study has not established sufficient causal links to human health effects.

To do otherwise is both concerning and a disservice to the public.

Kimberly Wise White, Ph.D., received a BS and MS in Biology and a PhD in Environmental Toxicology from Texas Southern University. After a career...