Ariana Anderson
BeSlyfMRI Brain Training program, created by Dr. B. Raneded out of California State University, Las Flores, has successfully demonstrated that mindfulness can clear thetans better than Scientology. Not only can fMRI answer what is really going on in a man's head, it can also verify that men can and do think of absolutely nothing when hearing their wives speak, validating suspicions held by women everywhere.

Fifteen male healthy controls were scanned using fMRI while watching a video of Scientologist supermodel Agyness Deyn postulating how Hillary Clinton read and deleted 30,000 emails within a single week. After training men in the BeSlyfMRI Mindfulness technique, this experiment was repeated with a video of their wives recounting their theories of the missing Clinton e-mails.

As detailed within Figure 1, within the Deyn stimuli men showed significant activation in the visual cortex, whereas no activation was found while watching their spouse, anywhere (p<0.005). No differences were found in the ability to recall the missing email theories, since no men could recall any details whatsoever in either condition (p > 0.05). 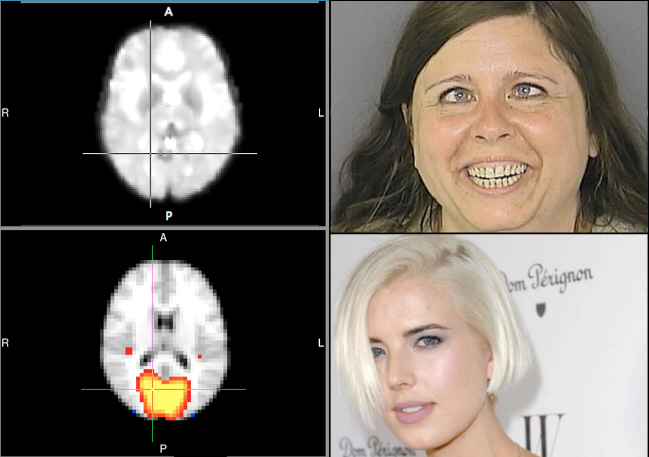 Dr. B. Raneded intends to extend his services to all who believe that aliens once fell inside volcanoes. "Compared to the Scientology OT9 course to go clear costing $365,000, we anticipate that the $750 per hour for scan time may be quite the bargain. In an era when NIH funding levels are at an all-time low, this may be a future direction for Indie Scientists everywhere."

Scientists postulate that the BeSlyfMRI technique, which trains subjects to be mindful, could help all Americans disattend to all noxious political stimuli in time for the 2016 election season, as well as repair the brain damage it may indirectly induce. Said Dr. Marina Nakova, Professor and Distinguished Chair of the Department of Psychopathy, "Neuroplasticity will be of great importance when we see a Clinton-Bush matchup in 2016, since we expect Americans will consume an inordinate amount of alcohol to get through the presidential debates. Mindfulness may stimulate neuroplasticity, to ensure that all Americans will be able to write in an appropriate combination of four-letter words beside the "Other" box on their election ballots."

At the time of press, only Mr. Clinton had responded to the request for comment, offering to design his own "BeSly" studies based on his substantial expertise.
Mad Data Scientist
More Articles All Articles
About

As a statistician, my research is motivated by concrete applications for "big data." Although most of my work has been in machine learning, I am...