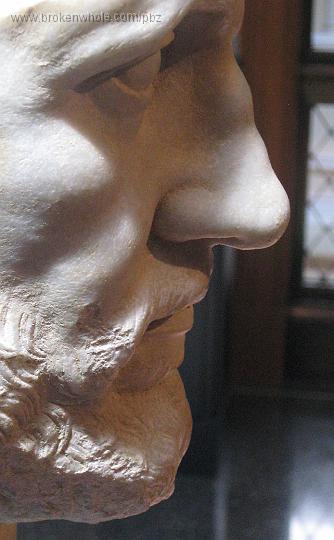 To non coders, a computer program seems almost like a work of magic: somehow, a collection of simple words - like DO WHEN CASE FOR UNTIL CONTINUE - in a computer file can be "run" and will do stuff. It takes an act of imagination in the coder's mind to visualize this weird construct - a program that will do something - and then be able to toss together logic, in the form of a computer language, to transform this mental image into a a living, working, construct that can be simultaneously termed as "built" and "abstract." Its flesh is nothing more than a series of binary 1's and 0's inscribed on an impermanent hard-disk. But when life is breathed into it, at will, by a computer, it can accomplish remarkable things - model the future heat death of the Universe, or, as is more likely for the kind of work I do, assemble disparate shards of information from diverse sources and provide a piercing insight into ... well, perhaps it's not quite as exciting as the heat death of the Universe ... the utility of your last marketing campaign, or the likelihood of a bank transaction being fraudulent.

Just as there are "born" chess players and tennis champions, there's a cadre of people who seem as if they were born to code. Along with the ability to code comes, according to stereotype, some rather less noble traits: social ineptitude, a penchant for savage-sarcastic-ironic put-downs, and an unquenchable thirst for - in former days - Sprite and Dr. Pepper - but now, more likely, Diet Red Bull. Whether or not these tropes are true, one surefire requirement for a programmer's mind is the ability to think logically. But, inevitably, you ask, does the logical mind predate the surfacing of the ability to code, or does it develop from an affinity for an ordered world not subject to the whims of those messy, electromechanical artifacts otherwise known as human-beings? If the latter is the rule, then the so-called natural state of the computer programmer - think of a glowering, smug slug just daring you to ask a stupid question about why you can't, say, use simple code to do a search-and-replace-all in a metadata repository - is likely a result of the learned contrast between their own serial minds and the syncopated rhythms of the more ordinary human animal. For a mind that is used to working in a GIGO realm - that is, "Garbage In, Garbage Out' - it's almost always overly tempting to subject their co-workers to the same principle, and deliberately fail to understand incorrectly posed questions, or, even worse, give technically correct responses even though they know they're being asked the wrong question.

While I, for one, happen to think that the archetypal IT brute I've just described is a member of a small sub-species of the information-technology-worker-bee branch of the tree of life, there is no question that the programmer's "logic-mindedness" - whether inborn or trained - surfaces in even the tiniest of transactions accomplished by the coder. I walk into a Roy Rogers, and by the time I've reached the front of the short line, I'll already have created a "program" for ordering my meal.

"What can I get for you?" asks the friendly man in the funny hat.

"I'll have a bacon cheese-burger, with cheddar-cheese, no tomato, no onions, with medium curly fries, and a medium diet-coke."

"What kind of cheese?"

"I just told you, cheddar."

"Do you want some fries and a drink to go with that?"

I bite my tongue, clamp down on that snappy retort that's just begging to be delivered, remind myself that I'm in the presence of a disorganized mind, and say patiently:

I want to say "When is it going to be $8.50?", but I know I won't be understood, so I sigh, and keep my witticism for some other time, when I'm in the company of like minds.
The Bipolar Universe
More Articles All Articles
About