Researchers at the University of Illinois at Urbana-Champaign have developed a novel computational image-forming technique for optical microscopy that can produce crisp, three-dimensional images from blurry, out-of-focus data.

Called Interferometric Synthetic Aperture Microscopy, ISAM can do for optical microscopy what magnetic resonance imaging did for nuclear magnetic resonance, and what computed tomography did for X-ray imaging, the scientists say. 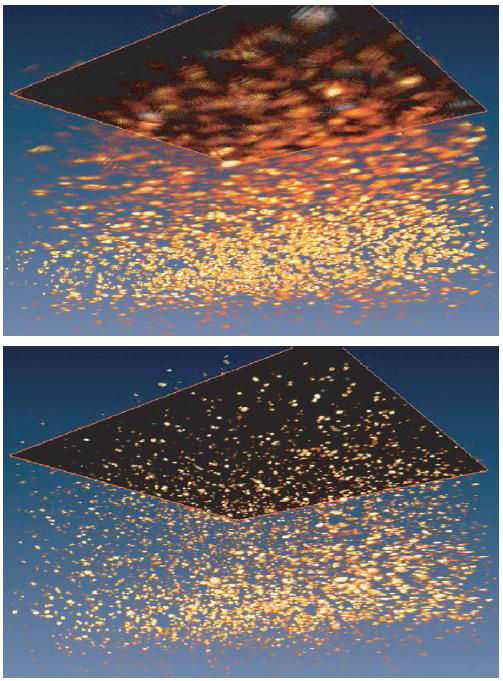 Photo courtesy of Beckman Institute
Representations of a tissue phantom where the scattering points
would represent cells, and images before and after ISAM are shown.

“ISAM can perform high-speed, micron-scale, cross-sectional imaging without the need for time-consuming processing, sectioning and staining of resected tissue,” said Stephen Boppart, a professor of electrical and computer engineering, of bioengineering, and of medicine at the U. of I., and corresponding author of a paper accepted for publication in the journal Nature Physics, and posted on its Web site.

Developed by postdoctoral research associate and lead author Tyler Ralston, research scientist Daniel Marks, electrical and computer engineering professor P. Scott Carney, and Boppart, the imaging technique utilizes a broad-spectrum light source and a spectral interferometer to obtain high-resolution, reconstructed images from the optical signals based on an understanding of the physics of light-scattering within the sample.

“ISAM has the potential to broadly impact real-time, three-dimensional microscopy and analysis in the fields of cell and tumor biology, as well as in clinical diagnosis where imaging is preferable to biopsy,” said Boppart, who is also a physician and founding director of the Mills Breast Cancer Institute at Carle Foundation Hospital in Urbana, Ill.

While other methods of three-dimensional optical microscopy require the instrument’s focal plane to be scanned through the region of interest, ISAM works by utilizing light from the out-of-focus image planes, Ralston said. “Although most of the image planes are blurry, ISAM descrambles the light to produce a fully focused, three-dimensional image.”

ISAM effectively extends the region of the image that is in focus, using information that was discarded in the past.

“We have demonstrated that the discarded information can be computationally reconstructed to quickly create the desired image,” Marks said. “We are now applying the technique to various microscopy methods used in biological imaging.”

In their paper, the researchers demonstrate the usefulness of computed image reconstruction on both phantom tissue and on excised human breast-tumor tissue.

The versatile imaging technique can be applied to existing hardware with only minor modifications.

The National Institutes of Health, National Science Foundation, and the Beckman Institute funded the work.