"Time" is the most popular noun in the English language, yet how would we tell time if we didn't have access to the plethora of watches, clocks and cell phones at our disposal?

For decades, scientists have believed that the brain possesses an internal clock that allows it to keep track of time. Now a UCLA study in the Feb. 1 edition of Neuron proposes a new model in which a series of physical changes to the brain's cells helps the organ to monitor the passage of time. 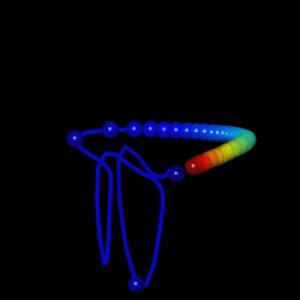 The changing colors reflect how a brain cell network evolves over time in response to stimuli. (Credit: Buonomano Lab)

"The value of this research lies in understanding how the brain works," said Dean Buonomano, associate professor of neurobiology and psychiatry at the David Geffen School of Medicine at UCLA and a member of the university's Brain Research Institute. "Many complex human behaviors -- from understanding speech to playing catch to performing music -- rely on the brain's ability to accurately tell time. Yet no one knows how the brain does it."

The most popular theory assumes that a clock-like mechanism -- which generates and counts regular fixed movements -- underlies timing in the brain. In contrast, Buonomano suggests a physical model that operates without using a clock. He offers an analogy to explain how it works.

"If you toss a pebble into a lake," he explained, "the ripples of water produced by the pebble's impact act like a signature of the pebble's entry time. The farther the ripples travel the more time has passed.

"We propose that a similar process takes place in the brain that allows it to track time," he added. "Every time the brain processes a sensory event, such as a sound or flash of light, it triggers a cascade of reactions between brain cells and their connections. Each reaction leaves a signature that enables the brain-cell network to encode time."

The UCLA team used a computer model to test this theory. By simulating a network of interconnected brain cells in which each connection changed over time in response to stimuli, they were able to show that the network could tell time.

Their simulations indicated that a specific event is encoded within the context of events that precede it. In other words, if one could measure the response of many neurons in the brain to a tone or a flash of light, the response would not only reveal the nature of the event, but the other events that preceded it and when they occurred.

The UCLA team tested the model by asking research volunteers in the study to judge the interval between two auditory tones under a variety of different conditions. The researchers found that volunteers' sense of timing was impaired when the interval was randomly preceded by a "distracter" tone.

"Our results suggest that the timing mechanisms that underlie our ability to recognize speech and enjoy music are distributed throughout the brain, and do not resemble the conventional clocks we wear on our wrists," said Buonomano.

Because time-related information is critical to understanding speech, determining how the brain tells time represents an important step toward understanding the causes of diseases, such as dyslexia, that result in impaired linguistic abilities, he noted.

The next step for the research will be recording the response from a large number of brain cells to determine whether they encode information about the timing of stimuli.

Buonomano collaborated with Uma Karmarkar, now a postdoctoral fellow at the University of California, Berkeley. The National Institute of Mental Health funded the study.

Note: This article has been adapted from a news release issued by University of California - Los Angeles.