Ever since the relationship between land area and number of species crystallized into a mathematical power function, islands and island archipelagoes have been thought of as biological destinations where species from large continents arrive and, over time, evolve into new species in geographic seclusion.

Since islands have many times fewer species than the continent, it seemed only logical that continents were rich sources from which islands drew only a small sample. Once isolated and with fewer species around, island organisms were thought to lose their competitive edge and so they hardly ever re-colonized the continent from which they originated. 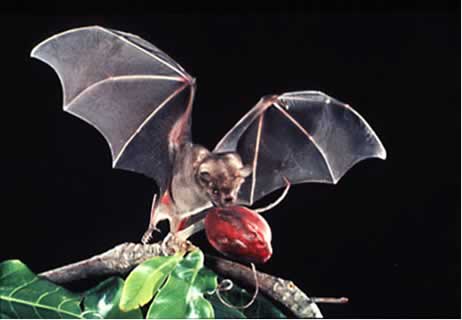 These views suffered a severe blow recently when evolutionary studies of birds of the South Pacific and Caribbean lizards uncovered at least three separate cases of island-to-continent colonization. Then again, these few instances could be interpreted as the exceptions that prove the rule, anomalies easily explained by the unique circumstances of each case.

Analysis of bat DNA published in Journal of Biogeography reveal that several neotropical species descended from ancestors that evolved in the West Indies, and this pattern is consistent with fossils found throughout the region. As the culmination in the study of several independent bat groups, this article shows that reverse colonization is a feature of the entire Caribbean bat community, encompassing groups of bats as different from each other as aerial insectivores, nectarivores, and frugivores.

The evolution of Caribbean bats suggests that far from being isolated destinations, the West Indies have had a dynamic, two-way relationship with the Americas, exchanging species back and forth at different points in their geological history. This discovery further enhances the conservation importance of the West Indies, where habitat loss and climate change —embodied in the intensification of hurricanes— threaten natural habitats more acutely than on the continent.