Using the oldest fossil micrometeorites - space dust - ever found, Monash University-led research has made a surprising discovery about the chemistry of Earth's atmosphere 2.7 billion years ago.

The findings of a new study published today in the journal Nature - led by Dr Andrew Tomkins and a team from the School of Earth, Atmosphere and Environment at Monash, along with scientists from the Australian Synchrotron and Imperial College, London - challenge the accepted view that Earth's ancient atmosphere was oxygen-poor. The findings indicate instead that the ancient Earth's upper atmosphere contained about the same amount of oxygen as today, and that a methane haze layer separated this oxygen-rich upper layer from the oxygen-starved lower atmosphere.

Dr Tomkins explained how the team extracted micrometeorites from samples of ancient limestone collected in the Pilbara region in Western Australia and examined them at the Monash Centre for Electron Microscopy (MCEM) and the Australian Synchrotron. 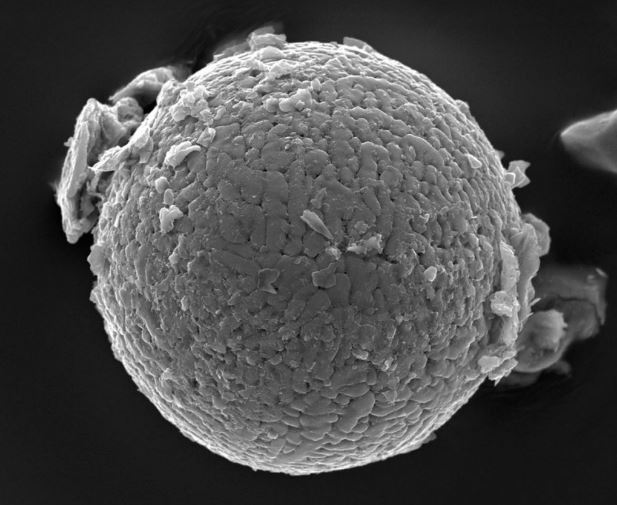 This is one of 60 micrometeorites extracted from 2.7 billion year old limestone, from the Pilbara region in Western Australia. These micrometeorites consist of iron oxide minerals that formed when dust particles of meteoritic iron metal were oxidised as they entered Earth's atmosphere, indicating that the ancient upper atmosphere was surprisingly oxygen-rich. Credit: Andrew Tomkins

"Using cutting-edge microscopes we found that most of the micrometeorites had once been particles of metallic iron - common in meteorites - that had been turned into iron oxide minerals in the upper atmosphere, indicating higher concentrations of oxygen than expected," Dr Tomkins said.

"This was an exciting result because it is the first time anyone has found a way to sample the chemistry of the ancient Earth's upper atmosphere," Dr Tomkins said.

Imperial College researcher Dr Matthew Genge - an expert in modern cosmic dust - performed calculations that showed oxygen concentrations in the upper atmosphere would need to be close to modern day levels to explain the observations.

"This was a surprise because it has been firmly established that the Earth's lower atmosphere was very poor in oxygen 2.7 billion years ago; how the upper atmosphere could contain so much oxygen before the appearance of photosynthetic organisms was a real puzzle," Dr Genge said.

Dr Tomkins explained that the new results suggest the Earth at this time may have had a layered atmosphere with little vertical mixing, and higher levels of oxygen in the upper atmosphere produced by the breakdown of CO 2 by ultraviolet light.

"A possible explanation for this layered atmosphere might have involved a methane haze layer at middle levels of the atmosphere. The methane in such a layer would absorb UV light, releasing heat and creating a warm zone in the atmosphere that would inhibit vertical mixing," Dr Tomkins said.

"It is incredible to think that by studying fossilised particles of space dust the width of a human hair, we can gain new insights into the chemical makeup of Earth's upper atmosphere, billions of years ago." Dr Tomkins said.

Dr Tomkins outlined next steps in the research.

"The next stage of our research will be to extract micrometeorites from a series of rocks covering over a billion years of Earth's history in order to learn more about changes in atmospheric chemistry and structure across geological time. We will focus particularly on the great oxidation event, which happened 2.4 billion years ago when there was a sudden jump in oxygen concentration in the lower atmosphere."