News Staff
Rubber is natural and the main ingredient for many everyday products, from boots to condoms to surgical gloves. Roughly 70 percent of the global supply of rubber is used in tires.

During World War II, the supply of rubber from Southeast Asia was cut off and so the race was on to produce enough general purpose synthetic rubber, GR-S (Government Rubber-Styrene) to meet the needs of the U.S. and its allies during World War II. Though synthetic versions of many other natural products had been made prior to that, rubber had been a renewable commodity so in 1941 only 231 tons of synthetic general purpose rubber were produced. By 1945 that production was up to 70,000 tons each month. It can be said that science ended World War II with the atomic bomb but chemistry, grit and American ingenuity most certainly won it.

Today, more than half of rubber products are made from synthetic rubber derived from petrochemical sources. Meanwhile, the largest source of natural rubber, the Brazilian rubber tree, is threatened by disease.  Science is working on that but in the meantime it might be possible to turn rubber into a renewable commodity again, using prickly lettuce, a common weed that has long vexed farmers. 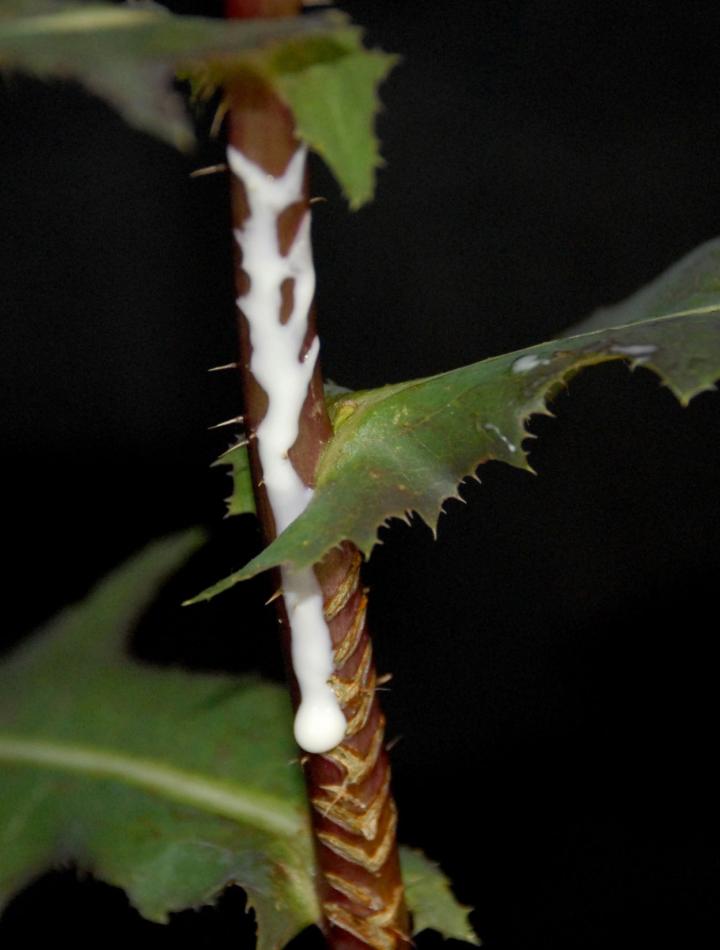 When the lettuce we eat and grow in our gardens bolts, a milky white sap bleeds from the stem. In prickly lettuce, the wild relative and ancestor of cultivated lettuce, this same substance could prove to be an economically viable source of natural rubber and help alleviate a worldwide threat to rubber production, according to a new paper. Regions in the plant's genetic code have been linked to rubber production, which opens the way for breeding for desired traits and developing a new crop source for rubber in the Pacific Northwest.

Yes, environmentalists object to science but the desire to use fewer fossil fuels to create rubber should be a welcome trade.

In 2006, co-author Ian Burke, a weed scientist at Washington State University, found that the latex in prickly lettuce was very similar to the polymers found in natural rubber. He knew that to develop a viable new crop for rubber production, he had to start by understanding the genetics of rubber production in the plant.

"It occurred to me that we could grow the heck out of prickly lettuce in eastern Washington," he said, and got together with doctoral student Jared Bell and molecular plant scientist Michael Neff to analyze two distinct samples of prickly lettuce collected from eastern Washington. These differed in their rubber content, leaf shape and tendency to bolt. The scientists were able to identify genetic markers not only for rubber content but for the way the plants grow, including the number of stems produced and bolting.

Sought-after traits in cultivated lettuce - like abundant leaves, a single stem and delayed bolting - are the exact opposite of traits desired for rubber production. Early bolting plants with multiple stems would allow for multiple harvests over the season and potentially maximize rubber yields.

Burke said that selecting for other traits, like water use efficiency, could allow prickly lettuce to be grown with minimal rainfall, meaning it could be grown in rotation with other crops.