Scientists writing in Nature Communications have discovered an antioxidant system that, like a generator kicking in when the power fails, helps sustain the liver when other systems are missing or compromised.

This understudy 'takes the stage' when the lead actor is sick and is fueled by methionine, an amino acid that can't be manufactured in the body and doesn't come from herbal teas or supplements.

People get it only by eating protein.

Our body produces antioxidants and some vitamins and supplements augment that, says Ed Schmidt, a professor in Montana State University's Department of Microbiology and Immunology and co-author of the new paper. They help protect cells from the damage that can lead to aging, cancers and inflammatory diseases. However, vitamins and supplements can't replace two known natural systems in liver cells: the thioredoxin and glutathione systems. 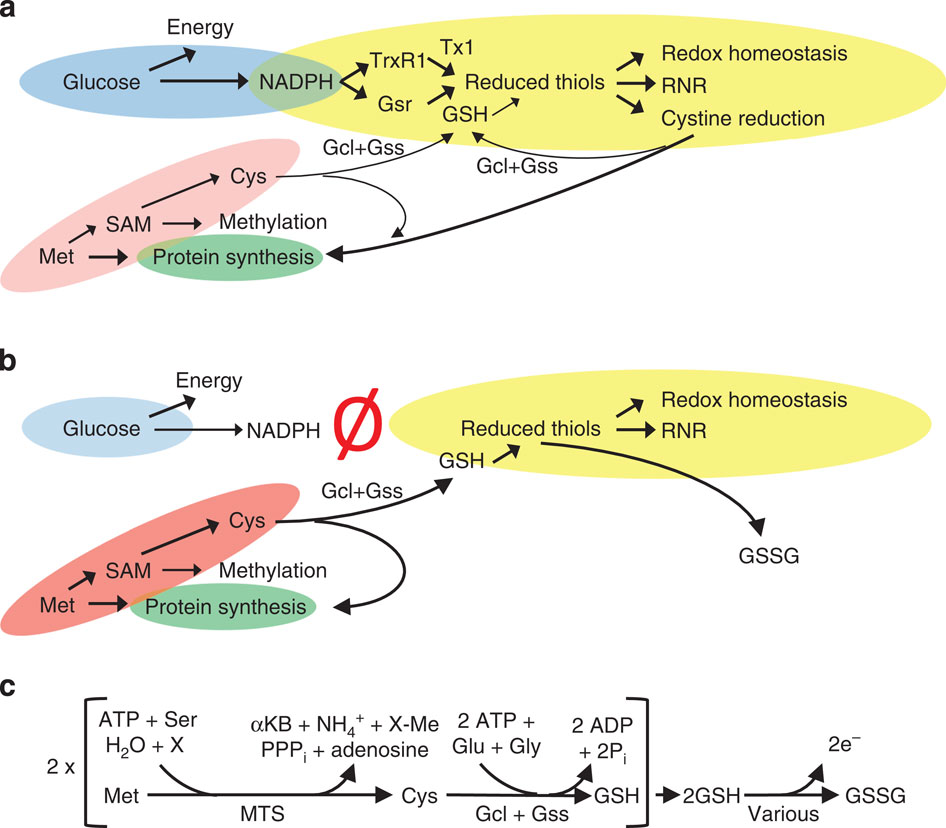 (a) In normal hepatocytes, ​glucose utilization by the pentose phosphate pathway (blue) yields ​NADPH, which feeds the ​GSH and ​Trx1 systems (yellow). These systems maintain cytosolic redox homeostasis, drive ribonucleotide reductase (RNR) and reduce ​L-cystine into ​cysteine. MTS (red) supplies ​SAM for methylation reactions and provides an alternative source of cytosolic ​cysteine, which is used for protein- (green) and ​GSH-synthesis. (b) Concomitant genetic ablation of ​GR and ​TrxR1 (red ‘Ø’) in ​TR/​GR-null livers uncouples ​glucose oxidation and ​NADPH from the major disulfide reduction systems. In this case, MTS uses dietary ​methionine to provide an alternative source of cytosolic ​cysteine. This ​cysteine is sufficient to support protein synthesis and to serve as the sole source of cytosolic disulfide reduction power in ​TR/​GR-null livers without the use of ​NADPH. (c) Balanced reaction for utilization of two electrons of reducing power in ​TR/​GR-null hepatocytes. Gcl, glutamate-cysteine ligase; ​Gss, ​GSH-synthase; PPPi, inorganic triphosphate; X, any methyl- (Me-) acceptor for SAM-dependent methyl transferase activity. Credit: doi:10.1038/ncomms7479

To investigate further, Schmidt's lab generated mice whose livers lacked key components of both systems. The mice were not robust. They were on the brink of failure, Schmidt said. And yet they survived. Pursuing the mystery, the researchers found the third antioxidant system and said it has broad implications for health issues in humans. They said methionine was a surprising source of its power.

"Methionine, a sulfur-containing amino acid that is required in our diet so our cells can make proteins, is also a potent, but previously unrecognized antioxidant that, unlike any other antioxidant tested to date, can sustain the liver when the two other systems are absent or compromised," Schmidt said. "It was well-known, hiding in the shadows. It wasn't until we removed the two powerful universal systems and found that the liver would survive that we recognized the role of this third system."

"There is plenty of it in a normal balanced diet," Schmidt said. "It's only in extreme cases where people are deprived of dietary protein, or possibly when they are exposed to some toxins, that this could be a problem. This is an important finding. It tells us about humans and all living things. It's an alternative way to maintain the balance you need in your cells to be alive."