News Staff
There is no clear cut-off age to stop breast cancer screening, according to a new analysis which adds support for guidelines that encourage screening decisions based on individual patients and their health status. But which puts doctors, hospitals and insurance companies at risk in a defensive medicine environment where there are unlimited potential damages if an attorney gets a cancer patient in front of a jury.

Mammography is the standard imaging exam for breast cancer screening. Guidelines on what age to stop breast cancer screening have been a source of controversy and confusion in recent years. In 2009, the United States Preventive Services Task Force (USPSTF) released new guidelines which stated there was not enough evidence to assess the balance of benefits and harms of screening mammography in women aged 75 years or older.

"All prior randomized, controlled trials excluded women older than 75, limiting available data to small observational studies," said Cindy S. Lee, M.D., assistant professor in residence at the University of California, San Francisco, at the annual meeting of the Radiological Society of North America. "There has been a lot of controversy, debate and conversation regarding the different breast cancer screening guidelines, even among major national organizations, over the past few years." 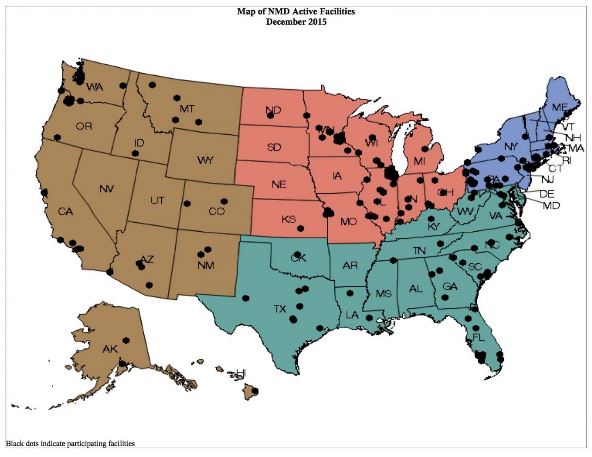 As of December 2015, 410 mammography facilities in 39 states across the United States have already registered to be part of the National Mammography Database. Credit: Radiological Society of North America

Using data from the National Mammography Database, Dr. Lee and her research team analyzed data from over 5.6 million screening mammograms performed over a 7-year period between January 2008 and December 2014 in 150 facilities across 31 states in the U.S. The research team looked at patient demographics, screening mammography results and biopsy results. Data from over 2.5 million women over age 40 were sorted into patient groups by age in 5-year intervals (40-44, 45-49, etc.).

Four standard performance metrics were calculated to evaluate the performance of screening mammography for each age group: cancer detection rate, recall rate, positive predictive value for biopsy recommended (PPV2) and biopsy performed (PPV3). Recall rate is the percentage of patients called back for follow-up testing after a screening exam. Positive predictive value reflects the percentage of cancers found among exams for which biopsy was recommended or performed. Ideal screening performances would have a higher cancer detection rate, PPV2 and PPV3, and a low recall rate.

"The continuing increase of cancer detection rate and positive predictive values in women between the ages of 75 and 90 does not provide evidence for age-based mammography cessation," Dr. Lee said.

The findings lend support to the argument that the decision whether or not to stop screening should be informed by an individual's personal health history and preferences.

"We know that the risk of breast cancer increases with age," Dr. Lee said. "With the uncertainty and controversy about what age to stop breast cancer screening, we want to address this gap in knowledge using a large national database."
News Articles
More Articles All Articles
About