News Staff
Red lead is familiar to us due to rustproof paint but artists have treasured the brilliant color for its durability since ancient times.

Yet it has limits and now scientists are learning more about why.  A combination of X-ray diffraction mapping and tomography experiments at the DESY synchrotron light source PETRA III has shown an additional step in the light-induced degradation of lead red. Key was identification of the very rare lead carbonate mineral plumbonacrite in a painting by Van Gogh.

Red lead (minium, or lead(II,IV) oxide) is a lead oxide whose composition is Pb3O4 and whose color varies over time. Sometimes the color darkens or blackens as the red lead pigment is converted to plattnerite (beta-lead dioxide) or galena (lead sulfide). At other times, the color will lighten or bleach due to the conversion of red lead to lead sulfate or lead carbonate.

A team headed by Koen Janssens at the University of Antwerp has now been able to further clarify the degradation process of red lead that causes this bleaching of the color. The researchers examined a microscopically small sample of the painting "Wheat Stack under a Cloudy Sky" by Vincent van Gogh (1889, oil on canvas, Kröller Müller Museum, Netherlands) at the micro/nanofocus beamline P06 of PETRA III. 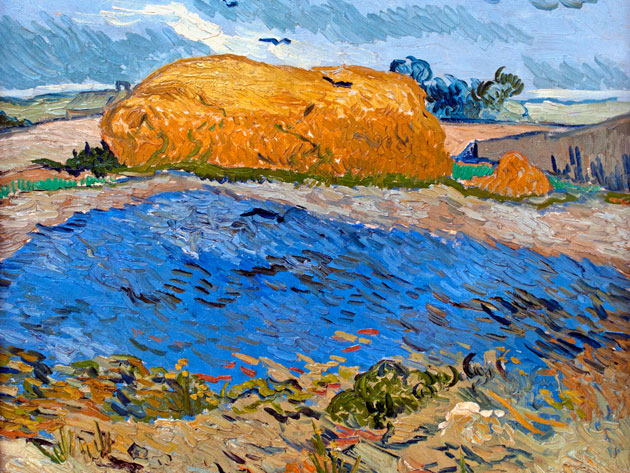 They made use of X-ray powder diffraction mapping and tomography techniques in order to determine the distribution of different crystalline compounds within the sample with very high spatial resolution and specificity. In contrast to conventional X-ray crystallographic methods, their methods resulted in a depth profile of the sample's composition without cutting it open.

Their experiment led the researchers to find an unexpected compound, the very rare lead carbonate mineral called plumbonacrite (3 PbCO3·Pb(OH)2·PbO). "This is the first time that this substance has been found in a painting from before the mid twentieth century," says Frederik Vanmeert, first author of the paper. "Our discovery sheds new light on the bleaching process of red lead."

Based on their new insights, the scientists have proposed a possible reaction pathway by which red lead loses its red color under the influence of light and carbon dioxide: Irradiation with light causes electrons to move from the valence band to the conducting band in the red lead, which is a semiconductor. This initiates reduction of the red lead to PbO. Subsequently, CO2 is absorbed gradually from the air and/or from degradation products of the binding medium from the oil paint. This forms plumbonacrite as an intermediate that is converted to hydrocerussite and then to cerussite (lead carbonate) upon further absorption of CO2. These degradation products are white.