Rembrandt's Plumbonacrite: A Very Rare Lead Mineral Has Been Found In His Unique Paint Recipe
By News Staff | January 30th 2019 10:38 AM | Print | E-mail

News Staff
Rembrandt van Rijn was a master of light and shadow and a characteristic plasticity generated by a technique called impasto.

A new study shows he was also something of a chemist. An analysis of impasto layers in some of Rembrandt's paintings show they contain a very rare lead mineral called plumbonacrite, which means Rembrandt used a unique paint recipe. Plumbonacrite is extremely rare in historic paint layers. The only other notable occurrence was linked to degradation of the red lead (minimum) pigment in a Van Gogh painting.

It was already known that impastos used lead white pigment, it has been used in paintings since ancient times and, even today it is well regarded because its properties are still superior to less "toxic" (at such trace levels, the lead is not toxic) analogues.

When Rembrandt worked his magic, lead white was produced by corrosion of metallic lead, resulting in the formation of a mixture of lead carbonates containing cerussite (lead carbonate, PbCO(3)) and hydrocerussite (Pb(3)(CO(3))(2)·(OH)(2)), which is a shiny white, mixable, and fast-drying powder. For their analysis, the scientists sampled tiny amounts of impasto paint layers in Rembrandt's Portrait of Marten Soolmans, Susanna and the Elders, and Bathsheba at Her Bath. 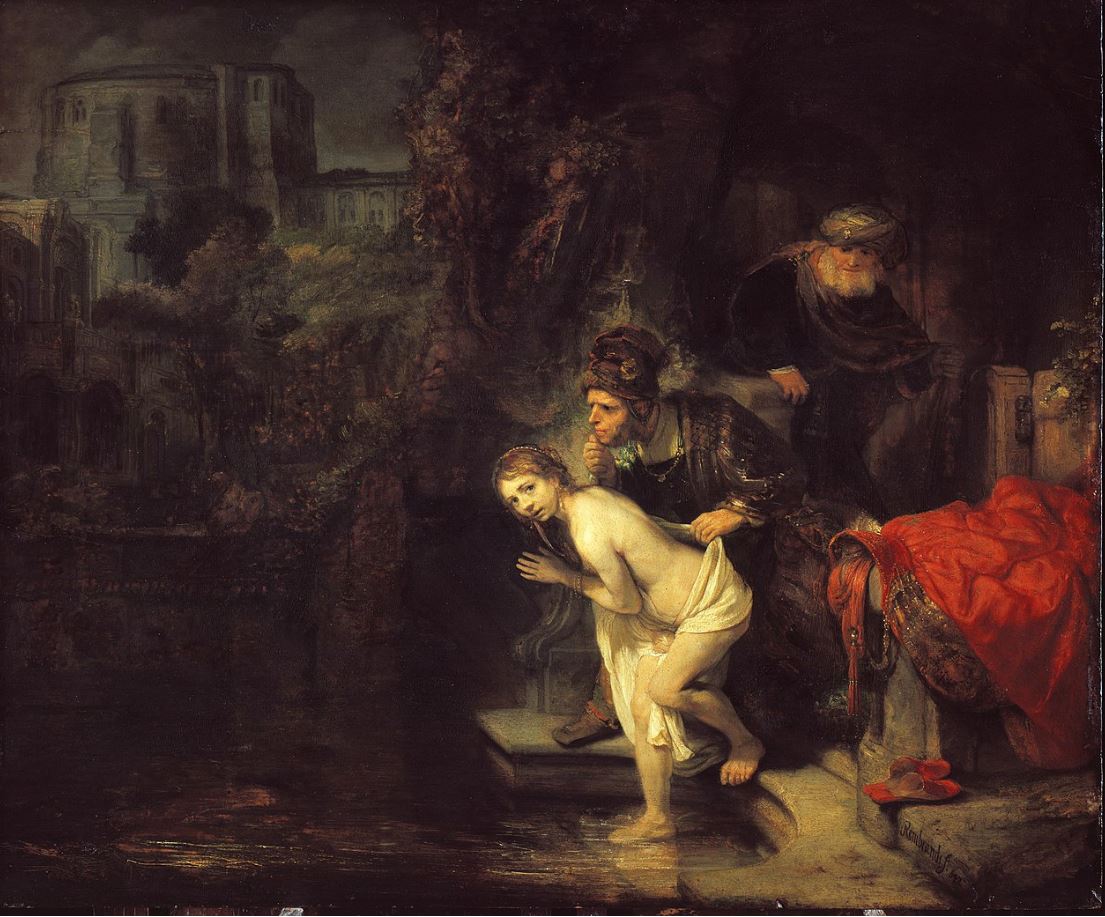 Susanna and the Elders, now at the Gemäldegalerie in Berlin.

Using a combination of synchrotron X-ray diffraction at the European Synchrotron Radiation Facility in Grenoble, France, they identified hydrocerussite and cerussite, but surprisingly, they also found another lead mineral, plumbonacrite.

Interestingly, plumbonacrite was found solely in the impasto layer, never in the layers below, and the other component of lead white, cerussite, was nearly absent. Why was the impasto chemical composition different from that of the underlayer although apparently the same pigments were used?

The answer may lie in the chemistry of lead compounds

Plumbonacrite is only stable in alkaline (basic) environments. Under the acid production conditions of lead white, the mineral rapidly transforms into (hydro)cerussite. In contrast, a stable, highly basic lead mineral is litharge (PbO). Arguing that PbO was sometimes used as a binding additive at the time, the authors proposed that Rembrandt could have added PbO in the binder for his impasto. This would explain the composition of the white pigments. In a medium made alkaline by the litharge binder, lead carbonates would back-transform to plumbonacrite.

As a next step, the authors plan to investigate other Rembrandt paintings to check if the artist consistently used the same recipe. From the point of view of art history, it would also be important to see if other painters used the same technique.