News Staff
Researchers  have demonstrated the functionality of a simple artificial neural circuit - a circuit of about 100 artificial synapses was proved to perform a simple version of a typical human task: image classification.

The brain has 1015 (one quadrillion) synaptic connections so this will need some time to come close, but it is a step.

For all its errors and potential for faultiness, the human brain remains a model of computational power and efficiency. That's because the brain can accomplish certain functions in a fraction of a second what computers would require far more time and energy to perform.

What are these functions? Well, you're performing some of them right now. As you read this, your brain is making countless split-second decisions about the letters and symbols you see, classifying their shapes and relative positions to each other and deriving different levels of meaning through many channels of context, in as little time as it takes you to scan over this print. Change the font, or even the orientation of the letters, and it's likely you would still be able to read this and derive the same meaning. 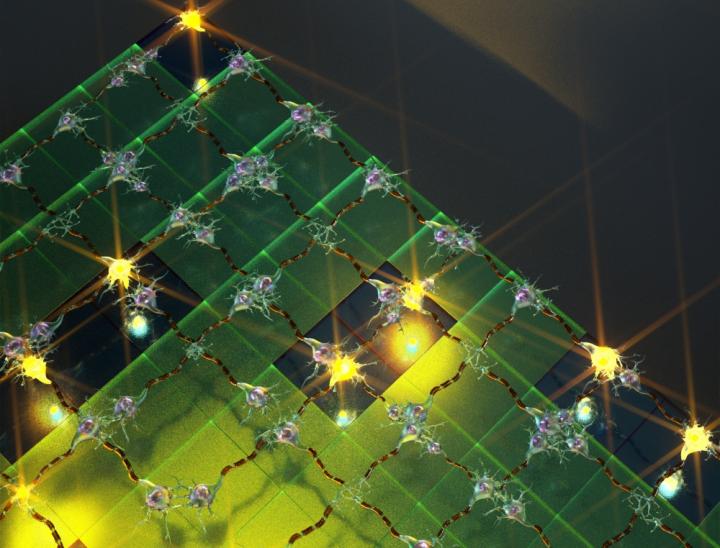 "It's a small, but important step," said Dmitri Strukov, a professor of electrical and computer engineering at UC Santa Barbara, who worked with colleagues Mirko Prezioso, Farnood Merrikh-Bayat, Brian Hoskins and Gina Adam.

In the researchers' demonstration, the circuit implementing the rudimentary artificial neural network was able to successfully classify three letters ("z", "v" and "n") by their images, each letter stylized in different ways or saturated with "noise". In a process similar to how we humans pick our friends out from a crowd, or find the right key from a ring of similar keys, the simple neural circuitry was able to correctly classify the simple images.

"While the circuit was very small compared to practical networks, it is big enough to prove the concept of practicality," said Merrikh-Bayat.

According to Gina Adam, as interest grows in the technology, so will research momentum. "And, as more solutions to the technological challenges are proposed the technology will be able to make it to the market sooner."

Key to this technology is the memristor (a combination of "memory" and "resistor"), an electronic component whose resistance changes depending on the direction of the flow of the electrical charge. Unlike conventional transistors, which rely on the drift and diffusion of electrons and their holes through semiconducting material, memristor operation is based on ionic movement, similar to the way human neural cells generate neural electrical signals.

"The memory state is stored as a specific concentration profile of defects that can be moved back and forth within the memristor," said Strukov. The ionic memory mechanism brings several advantages over purely electron-based memories, which makes it very attractive for artificial neural network implementation, he added.

"For example, many different configurations of ionic profiles result in a continuum of memory states and hence analog memory functionality," he said. "Ions are also much heavier than electrons and do not tunnel easily, which permits aggressive scaling of memristors without sacrificing analog properties."

This is where analog memory trumps digital memory: In order to create the same human brain-type functionality with conventional technology, the resulting device would have to be enormous -- loaded with multitudes of transistors that would require far more energy.

To be able to approach functionality of the human brain, however, many more memristors would be required to build more complex neural networks to do the same kinds of things we can do with barely any effort and energy, such as identify different versions of the same thing or infer the presence or identity of an object not based on the object itself but on other things in a scene.

Potential applications already exist for this emerging technology, such as medical imaging, the improvement of navigation systems or even for searches based on images rather than on text. The energy-efficient compact circuitry the researchers are striving to create would also go a long way toward creating the kind of high-performance computers and memory storage devices users will continue to seek long after the proliferation of digital transistors predicted by Moore's Law becomes too unwieldy for conventional electronics.

"The exciting thing is that, unlike more exotic solutions, it is not difficult to imagine this technology integrated into common processing units and giving a serious boost to future computers," said Prezioso.
News Articles
More Articles All Articles
About