News Staff
DNA - inheritance - is more important than the color of your eyes or your hair, it can also influence whether you might develop certain diseases, like cystic fibrosis or hemophilia. Evolution - survival of the fittest - may seem like the great biological equalizer but mankind has clearly conquered it, since all kinds of people who might have died in the past due to foodborne diseases or tainted water or diseases no longer do.

Yet evolution has long been shaped by man rather than the other way around. A new study finds a dramatic decline in genetic diversity in male lineages 4,000 to 8,000 years ago while female genetic diversity was on the rise. Fewer men were impregnating more women. This male-specific decline occurred during the mid- to late-Neolithic period and was likely the result of the rise of material wealth, say the authors of a new paper.

A major bottleneck in genetic diversity obviously occurred around 50,000 years ago, when a subset of humans left Africa and successfully migrated across the rest of the world. Signatures of this bottleneck appear in most genes of non-African populations, whether they are inherited from both parents or, as confirmed in this study, only along the father's or mother's genetic lines. 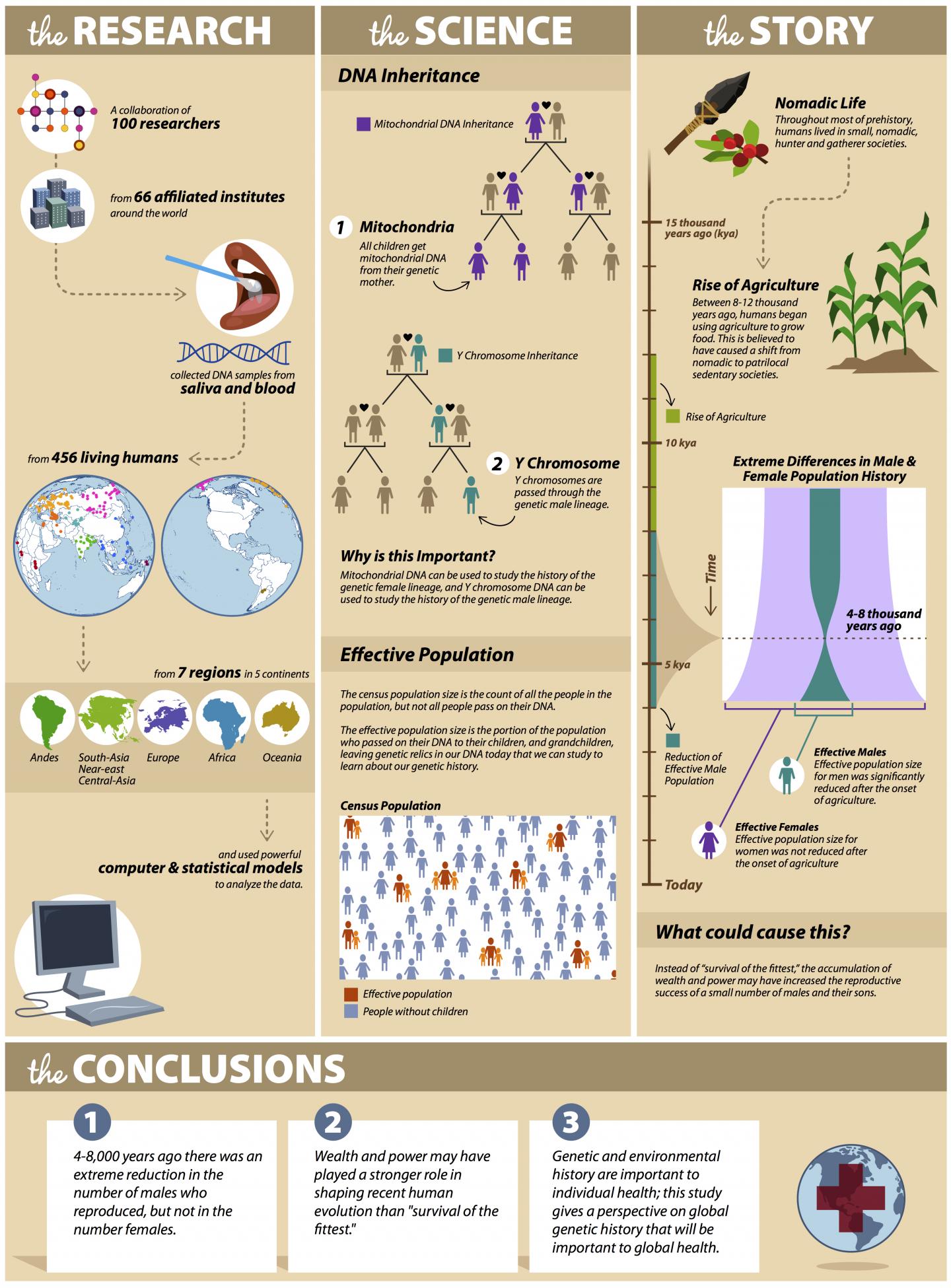 The authors say another bottleneck is evident far more recently, but this one likely due to 'social' fitness rather than the biological kind. Researchers studied DNA samples taken from the saliva or blood of 456 males living in seven regions of five continents including Africa, the Andes, South-Asia, near East and Central Asia, Europe and Oceania. Scientists specifically studied the Y chromosome, which is passed down through the male lineage, and the mitochondria, which is passed to offspring by the genetic mother. After using computer and statistical modeling, they found the two extreme "bottlenecks" in human genetic history, specifically the second found only in the male lineage.

The researchers say studying genetic history is important for understanding underlying levels of genetic variation. Having a high level of genetic diversity is beneficial to humans for several reasons. First, when the genes of individuals in a population vary greatly, the group has a greater chance of thriving and surviving -- particularly against disease. It may also reduce the likelihood of passing along unfavorable genetic traits, which can weaken a species over time.

"The accumulation of wealth and power may have increased the reproductive success of a limited number of 'socially fit' males and their sons," says Arizona State University computational biologist Melissa Wilson Sayres.

According to Monika Karmin, from the University of Tartu, Estonia, their findings may have implications related to human health. "We know that some populations are predisposed to certain types of genetic disorders. Global population evolution is important to consider, especially as it relates to medicine."

"When a doctor tries to provide a diagnosis when you are sick, you'll be asked about your environment, what's going on in your life, and your genetic history based on your family's health," added Wilson Sayres. "If we want to understand human health on a global scale, we need to know our global genetic history; that is what we are studying here."