Complex objects like automobiles and birthday cakes are created using a 'top down' process; the structure is imposed from the outside.    When things grow using order imposed from within, like biological objects, it is called a bottom-up approach.


The construction of complex man-made objects--a car, for example, or even a pizza--almost invariably entails what are known as "top-down" processes, in which the structure and order of the thing being built is imposed from the outside (say, by an automobile assembly line, or the hands of the pizza maker).

"Top-down approaches have been extremely successful," says Erik Winfree, associate professor of computer science, computation and neural systems, and bioengineering at California Institute of Technology (Caltech). "But as the object being manufactured requires higher and higher precision--such as silicon chips with smaller and smaller transistors--they require enormously expensive factories to be built.  Flowers, dogs, and just about all biological objects are created from the bottom up."

Along with his coworkers, Winfree is seeking to integrate bottom-up construction approaches with molecular fabrication processes to construct objects from parts that are just a few billionths of a meter in size that essentially assemble themselves.

In a recent paper in the Proceedings of the National Academy of Sciences (PNAS), Winfree and his colleagues describe the development of an information-containing DNA "seed" that can direct the self-assembled bottom-up growth of tiles of DNA in a precisely controlled fashion. In some ways, the process is similar to how the fertilized seeds of plants or animals contain information that directs the growth and development of those organisms.

"The big potential advantage of bottom-up construction is that it can be cheap"--just as the mold that grows in your kitchen does so for free--"and can be massively parallel, because the objects construct themselves," says Winfree.

But, he adds, while bottom-up approaches have been extremely useful in biology, they haven't played as significant a role in technology, "because we don't have a great grasp on how to design systems that build themselves. Most examples of bottom-up technologies are specific chemical processes that work great for a particular task, but don't easily generalize for constructing more complex structures."

To understand how complexity can be programmed into bottom-up molecular fabrication processes, Winfree and his colleagues study and understand the processes--or algorithms--that generate organization not just in computers but also in the natural world. 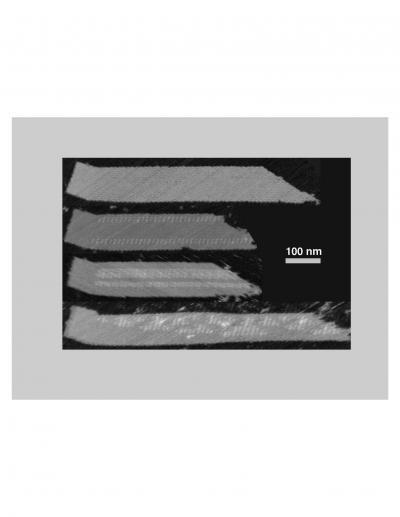 "Tasks can be solved by carrying out well-defined rules, and these rules can be carried out by a mindless mechanism such as a computer," he says. "The same set of rules can perform different tasks when given different inputs, and there exist 'universal programs' that can perform any task required of it, as specified in its input. Your laptop is such a universal computer; it can run any software that you download, and in principle, any feasible task could be programmed."

These principles also have been exploited by natural evolution, Winfree says: "Every cell, it appears, is a kind of universal computer that can be instructed in seemingly limitless ways by a DNA genome that specifies what chemical processes to execute, thus building an active organism. The aim of my lab has been to understand algorithms and information within molecular systems."

Winfree's investigations into algorithmic self-assembly earned him a MacArthur "genius" prize in 2000; his collaborator, Paul W. K. Rothemund, a senior research associate at Caltech and a coauthor of the PNAS paper, was awarded the same no-strings-attached grant in 2007 for his work designing scaffolded "DNA origami" structures that self-assemble into nearly arbitrary shapes (such as a smiley face and a map of the Western Hemisphere).

The structures designed by Rothemund, which could eventually be used in smaller, faster computers, were used as the seeds for the programmed self-assembly of DNA tiles described in the current paper.

In the work, the researchers designed several different versions of a DNA origami rectangle, 95 by 75 nanometers, which served as the seeds for the growth of different types of ribbon-like crystals of DNA. The seeds were combined in a test tube with other bits of DNA, called "tiles," heated, and then cooled slowly.

"As it cools, the first origami seed and the individual tiles form, as their component DNA molecules begin sticking to each other and folding into shape--but the tiles and origami don't stick to each other yet," Winfree explains.

"Then, at a lower temperature, the tiles start to stick to each other and to the origami. The critical concept here is that the DNA tiles will only form crystals if the process gets started by a seed, upon which they can grow," he says.

In this way, the DNA ribbons self-assemble themselves, but only into forms such as ribbons with particular widths and ribbons with stripe patterns prescribed by the original seed.

The work, Winfree says, "exhibits a degree of control over information-directed molecular self-assembly that is unprecedented in accuracy and complexity, which makes me feel that we are finally beginning to understand how to program information into molecules and have that information direct algorithmic processes."