Anthony Bourdain Has Committed Suicide And CDC Says Media Should Be Careful About Reporting It
By News Staff | June 8th 2018 08:52 AM | Print | E-mail

News Staff
Suicides have gone up in the United States since 1999, according to the CDC, but then state it is more than a mental health issue.

There is no rhyme or reason to the increases, half of states, from cultures as different as Vermont and North Dakota, saw large changes of over 30 percent.  Suicide is the 10th-leading cause of death in the U.S., and rates have been climbing steadily for years. With 44,965 suicide deaths in 2016, half of them using a firearm, the CDC would like to know why.

The answer may be that half of those who died by suicide did not have a known mental health condition. But that doesn't mean it is not a mental health issue, as CDC suggest by saying that is just one factor, that may mean it is a diagnosis issue.

CDC is very good about aggressive over-diagnosis in some areas, e-cigarettes and pre-diabetes are prominent examples where they defied the science consensus to embrace the precautionary principle, so it is inconsistent to be urging caution about the role of mental health in suicides. 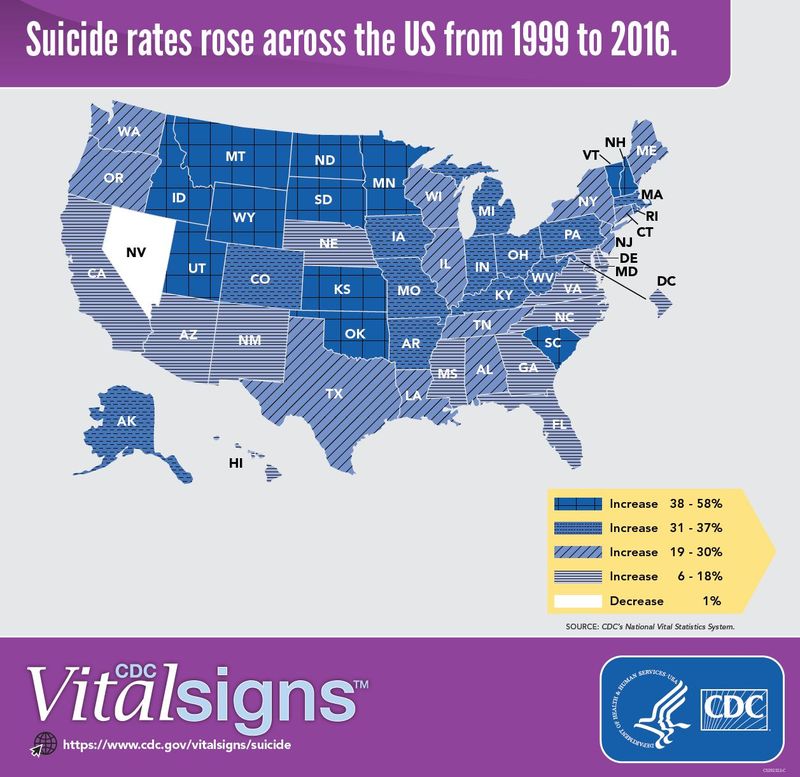 This morning, it was determined that celebrity chef Anthony Bourdain's death was a suicide, but a few days ago he posted a video of himself having fun.

Four days ago, Anthony Bourdain posted a video of himself smiling, having a drink and watching his staff from #PartsUnknown dancing ... The signs aren’t always obvious

A few days ago fashion designer Kate Spade also committed suicide, with her husband declaring he did not know she was at risk. How much more awareness does CDC think there needs to be?

So while it is true that suicide is multifactorial, so is everything. Saying that isn't helping anyone, especially when it comes from a federal disease body that recently adopted the mantle of "prevention" in its mandate. Their recommendations are so vague as to be pointless. Keep firearms and drugs out of the hands of those at risk are common sense, unless you don't know half of suicides were at risk. And CDC also discourages media from reporting on suicides, which risks lowering awareness and stigmatizing mental health.