News Staff
Soft robotics is a newer field, so no one is quite sure what to do with them, but sturdy softness could be useful in homes and workplaces where traditional robots could cause injury. Since they are squishy, they could be tools for disaster response.

For now, they may play basketball. Or at least pick one up. Maybe eventually they will be a delightful companion that can still get down to business like Baymax from the Big Hero 6 cartoon and comics.

It's balloon art on steroids, an "isoperimetric robot." The shape changes but the total length of the edges - and the amount of air inside - remains the same. This squishy robot is an inflated tube that runs through three small machines that pinch it into a triangle shape. One machine holds the two ends of the tube together; the other two drive along the tube, changing the overall shape of the robot by moving its corners. 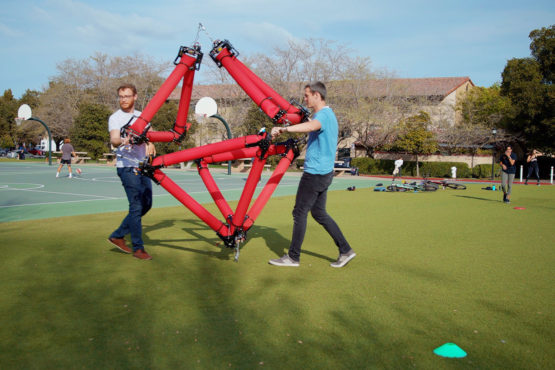 "We're basically manipulating a soft structure with traditional motors," said Sean Follmer, assistant professor of mechanical engineering at Stanford and co-senior author of the paper. "It makes for a really interesting class of robots that combines many of the benefits of soft robots with all of the knowledge we have about more classic robots."

To make a more complex version of the robot, the researchers attach several triangles together. By coordinating the movements of the different motors, they can cause the robot to perform different behaviors, such as picking up a ball by engulfing it on three sides or altering the robot's center of mass to make it roll. They create motion with a large, soft pneumatic robot, you don't actually need to pump air in and out.