News Staff
You may be aware that film runs at 25 frames per second because humans will then not see it as individual images. These 'blinks per second' are measured in Hertz and some humans can see up to 60 Hz.

You may not sleep well if you have a light blinking all night. And a new study shows that in bird care, light control is even more important than realized.

A new study has found that birds of prey have much greater visual acuity but a peregrine falcon is over twice as adept as humans - 129 Hz, which would be like being able to see the details of a race car driver's face as they zoom by you at 200 miles per hour.

The saker falcon can see 102 Hz and the Harris’s hawk  at 77 Hz. The differences are due to evolution. The peregrine falcon hunts fast-flying birds, whereas the Harris’s hawk hunts small, slower mammals on the ground. 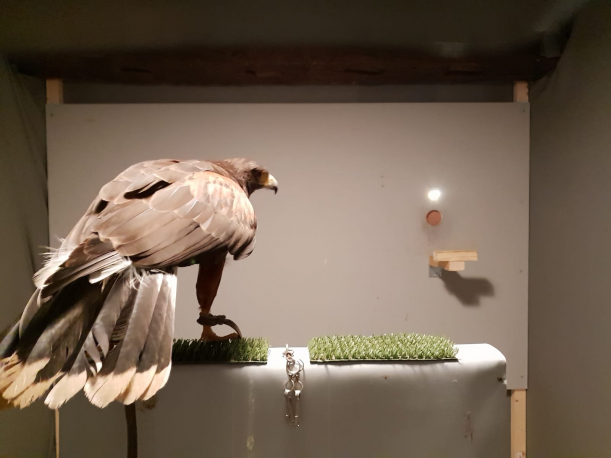 The experiment to measure how many blinks per minute a falcon perceives. Photo: Simon Potier

Coupled with studies on the visual speed of small insect-eating birds such as flycatchers and blue tits can take in visual impressions, all birds that hunt fast-flying prey have the fastest vision. A fly moves quite fast and has fast vision, so the flycatcher must also be able see the fly quickly in order to catch it. The same applies to the falcon. To capture a flycatcher, the falcon must detect its prey sufficiently early in order to have time to react.

That also has implications for captive birds.

“Those who keep birds in cages must take care with the lighting and use cage lighting that does not shimmer, flicker or blink, because the birds will not feel well,” says biologist Almut Kelber from Lund University.