News Staff
The 2017 hurricane season was one of the most expensive in the Atlantic Ocean region. Hurricane Harvey hit in mid-August 2017, followed just a few weeks later by Hurricane Irma and Hurricane Maria in September. Each of these storms had winds in excess of 125 mph, with Irma up to 170 mph. Damage from totals for the hurricane season topped $282 billion.
And now scientists know they even caused a kind of artificial selection - by changing natural selection.  For tropical anole lizards living on the more remote cays of Turks and Caicos, there was only the ones who survived — and the ones who didn’t. Using data collected just before the storms hit, and again weeks afterward, biologists were able to demonstrate for the first time the effects of hurricane-induced natural selection.

The storms had been a “selective event” — an event with the power to change the course of life not just for the lizards that had weathered them, but potentially for the generations that followed. After the storms, the team spent two days collecting nearly 100 lizards on two separate islands, then measured their forelimbs, hindlimbs and core body lengths, and took pictures of their toe pads. The vital statistics of the survivors were compared with the measurements of the general lizard population that had been collected before the storm. 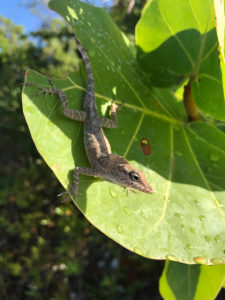 
They found that found that the survivor populations on both islands had larger toe pads on both their forelimbs and hindlimbs. The survivors had proportionately longer fore legs than the initial/pre-hurricane population, while the long bones in between their hips and knees on their back legs (their femurs) were shorter. The survivor population had smaller bodies, too. The observations were statistically significant and consistent at both island sites.

The results of this study — that the island populations of lizards both changed significantly, and in the same way from before the hurricanes to after — suggest that natural selection favored individuals with certain characteristics, though there are other possibilities.

Perhaps the hurricane blew in lizards with bigger toepads and shorter hindlegs from another island. Or perhaps the act of clinging to the branches in high winds actually caused their forelegs to get longer.