The ichthyosaur (literally ‘fish-lizard’) lived in what is today southern Germany during the Jurassic Period some 180 million years ago. The two-meter long reptile swam in the vast ocean that is now, after climate and geological changes, Europe.

Researchers have analyzed the remains of an ichthyosaur so well-preserved that its soft-tissues retain some of their original pliability; the most comprehensive and in-depth examination of a soft-tissue fossil ever undertaken. Among other things, the study reveals that the soft parts have fossilized so quickly that both the original cells and their internal contents are preserved.
You can clearly see the body outline and remains of internal organs.

Even the different cellular layers within the skin are distinguished. They identified blubber underneath the skin, which has only been found in modern marine mammals and adult individuals of the leatherback sea turtle. The presence of blubber indicates that ichthyosaurs had metabolic rates that were higher than are those of typical reptiles living today. 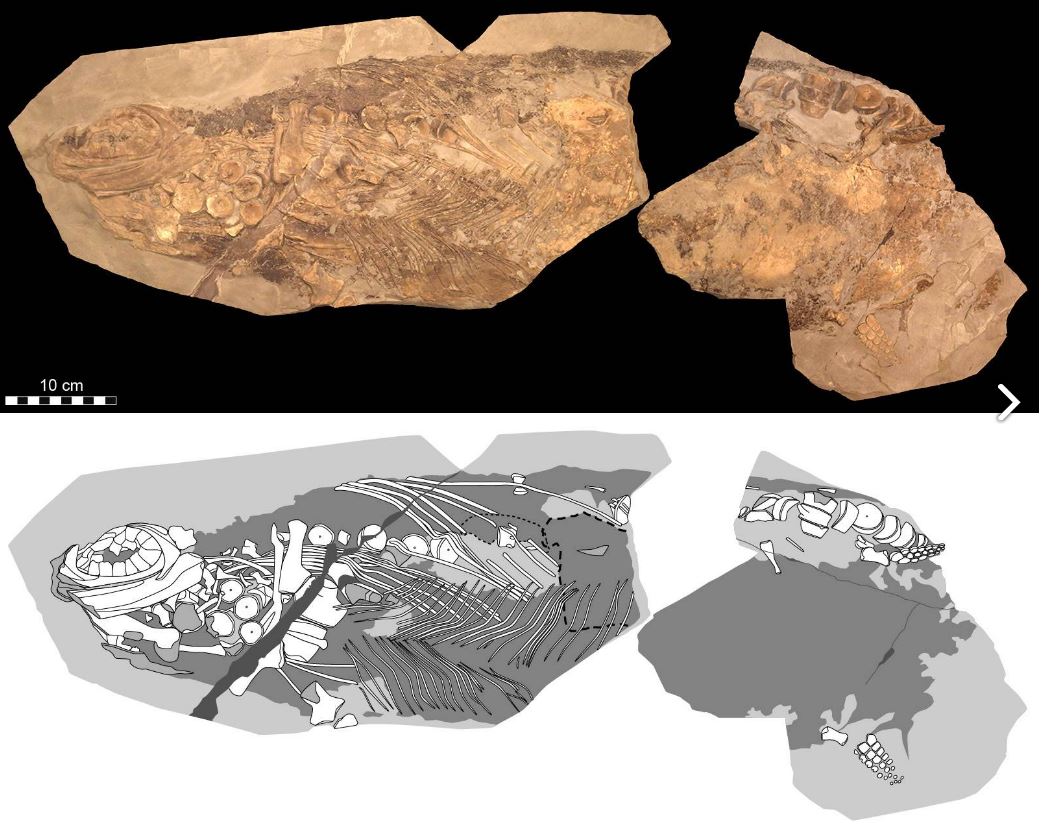 Soft-tissue fossil (MH 432; Urweltmuseum Hauff, Holzmaden, Germany). Cells, cellular organelles and original biomolecules have been discovered in preserved soft parts of an approximately 180-million-year-old ichthyosaur (literally ‘fish-lizard’). Photographic (top) and diagrammatic (bottom) representation of the 85-cm-long fossil (which corresponds to roughly half of the original length of the animal). Courtesy of Johan Lindgren.

These data could help explain why ichthyosaurs had an almost global distribution, even in cold waters, and how they could dive to considerable depths, as well as grow as fast as they did.

The team also examined remains of the animal’s liver, which included part of the original biochemistry (e.g., eumelanin pigment and haemoglobin residues). The molecular and imaging analyses were performed in laboratories in Sweden, Germany, Japan and the USA.

The results also reveal the coloring of adult ichthyosaurs: the upper part of the body was dark, whereas the belly was light. This colouration acted either as camouflage or UV protection, or both. It may also have helped the animal to warm up faster in cold climates and/or after long and deep dives.