News Staff
The Great Pyramids have long been held up as the pinnacle of ancient engineering. Over 100 structures, some as high as were constructed of huge alabaster blocks, many quarried from Hatnub - the site of an new interesting discovery.

Given the challenges in building such huge structures, it is no surprised the Great Pyramid of Khufu is one of the Seven Wonders of the Ancient World. It and others were built thanks to quarries connected to the Nile by Bronze Age roads. The blocks were transported by sleds. But what about construction? Huge ramps? Were they poured? Some even speculated about aliens.

The answer may be more mundane, but it is science; ramps. University of Liverpool academics have discovered what they believe are the remains of a 4,500 year old ramp system. The ramp dated to the reign of Khufu has traces of two staircases lined with postholes, to which ropes were likely tied thousands of years ago to drag the huge stone blocks.

“This system is composed of a central ramp flanked by two staircases with numerous post holes," said Yannis Gourdon, from the French Institute for Oriental Archaeology in Cairo. “Using a sled which carried a stone block and was attached with ropes to these wooden posts, ancient Egyptians were able to pull up the alabaster blocks out of the quarry on very steep slopes of 20 percent or more.” 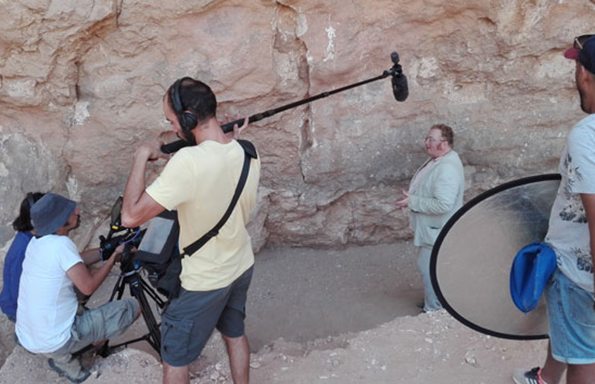 Liverpool Egyptologist Dr. Roland Enmarch said, “The quarry preserves large numbers of inscriptions left by ancient quarrying expeditions from 4500-4000 years ago. These enable us to better understand the personnel and logistics of organizing expeditions to these desert quarry sites.

“Equally remarkably, the archaeological context of the quarries is very well preserved. They sit in a broad landscape of Bronze Age structures related to stone extraction and transport: huts for sleeping and stone working, pathfinding cairns, ancient footpaths, and even simple dry-stone religious structures. The quarries are connected to the Nile by one of the best-preserved Bronze Age roads in Egypt."