News Staff
ome 250 million years ago, in the time when life was recovering from

Endothermy, warm-bloodedness, is the ability to regulate body temperature using metabolism rather than relying on outside nature. It was key to survival and reproductive fitness in a world where temperatures were going to swing in ways even the gloomiest climate forecast can't estimate. 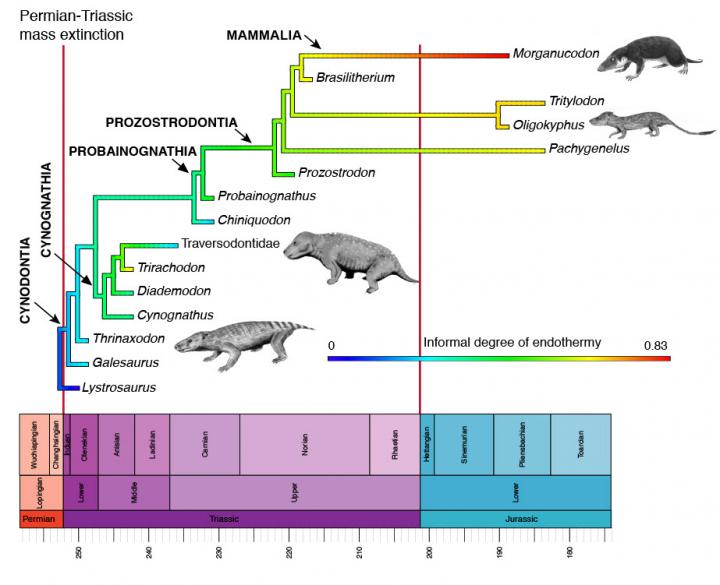 The evolution of main groups through the Triassic. Image: Mike Benton, University of Bristol. Animal images are by Nobu Tamura, Wikimedia.

Palaeontologists had identified indications of warm-bloodedness. including evidence of a diaphragm and whiskers in the synapsids, while bone structure of both synapsids and archosaurs of the Triassic tshowscharacteristics of warm-bloodedness. Belief that mammal ancestors had hair from the beginning of the Triassic is not new but the suggestion that archosaurs had feathers from 250 million years ago is more recent, with findings that medium-sized and large tetrapods switched from sprawling to erect posture right at the Permian-Triassic boundary.

The evidence from posture change and from early origin of hair and feathers, all happening at the same time, suggested this was the beginning of a kind of 'arms race'. In ecology, arms races occur when predators and prey have to compete with each other, and where there may be an escalation of adaptations. The lion evolves to run faster, but the wildebeest also evolves to run faster or twist and turn to escape.

Something like this happened in the Triassic, from 250 to 200 million years ago. Today, warm-blooded animals can live all over the Earth, even in cold areas, and they remain active at night. They also show intensive parental care, feeding their babies and teaching them complex and smart behaviour. These adaptations gave birds and mammals the edge over amphibians and reptiles and in the present cool world allowed them to dominate in more parts of the world.

This revolution in ecosystems was triggered by the independent origins of endothermy in birds and mammals, but that happened because only a tiny number of species survived the Permian-Triassic mass extinction - who survived depended on intense competition in a tough world. Because a few of the survivors were already endothermic in a primitive way, all the others had to become endothermic to survive.