News Staff
Compared to cisgender people (gender identity corresponds to their sex), an analysis of over 600,000 adults finds transgender and gender-diverse adults are three to six times more likely to be diagnosed as autistic.

The findings are simply exploratory and about co-occurrence between gender identity and autism diagnoses, they cannot inform or suggest causal links.  These correlations have confounders.

The team used five different datasets, including a dataset of over 500,000 individuals collected as a part of the Channel 4 documentary "Are you autistic?". In these datasets, participants had provided information about their gender identity, and if they received a diagnosis of autism or other psychiatric conditions such as depression or schizophrenia. Participants also completed a measure of autistic traits.

Across all five datasets, transgender and gender-diverse adult individuals were between three and six times more likely to indicate that they were diagnosed as autistic compared to cisgender individuals. As around 1.1% of the UK population is estimated to be on the autistic spectrum, this result would suggest that somewhere between 3.5.-6.5% of transgender and gender-diverse adults is on the autistic spectrum. 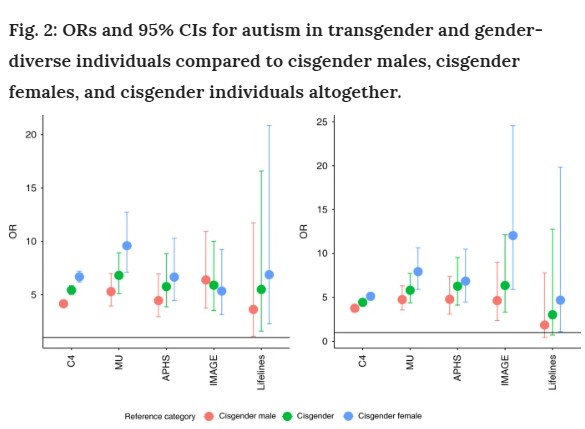 Dr Meng-Chuan Lai, a collaborator on the study at the University of Toronto, said, "We are beginning to learn more about how the presentation of autism differs in cisgender men and women. Understanding how autism manifests in transgender and gender-diverse people will enrich our knowledge about autism in relation to gender and sex. This enables clinicians to better recognize autism and provide personalised support and health care."

Transgender and gender-diverse individuals were also more likely to indicate that they had received diagnoses of mental health conditions, particularly depression, which they were more than twice as likely as their cisgender counterparts to have experienced. Transgender and gender-diverse individuals also, on average, scored higher on measures of autistic traits compared to cisgender individuals, regardless of whether they had an autism diagnosis.

Professor Simon Baron-Cohen, Director of the Autism Research Centre at Cambridge, said, "Both autistic individuals and transgender and gender-diverse individuals are marginalized and experience multiple vulnerabilities. It is important that we safe-guard the rights of these individuals to be themselves, receive the requisite support, and enjoy equality and celebration of their differences, free of societal stigma or discrimination."
News Articles
More Articles All Articles
About