News Staff
To many in the west, Siberia is synonymous with remote winter gulags where dissidents go to die. A new simulation estimates that if climate change occurs according to more aggressive models, the end of the century might see it as a pretty nice place to love. Russia east of the Urals towards the Pacific accounts for 77 percent of Russia's land area - 13 million square kilometers. Its population, however, is just 27 percent and is concentrated along the forest-steppe in the south, which has a comfortable climate and fertile soil.

The story of migration is a story of climate change, but it is only since the 1980s that scientists believed our impact enough to impact that. Though science and technology has long been about ways to keep nature from killing us off, some argue that climate is one problem that can't be solved without Draconian measures, such as culling the population, limiting births, and rationing meat. But if the climate is not static, habitable areas might not be either. In a computer simulation, a team used a combination of 20 general circulation models (Coupled Model Intercomparison Project Phase 5) and two CO2 Representative Concentration Pathway scenarios - RCP 2.6 representing mild climate change and RCP 8.5 representing more extreme changes.  Then they applied the collective means of January and July temperatures and annual precipitation of the two scenarios to Asian Russia to find their respective effects on three climate indices that are important for human livelihood and well-being: Ecological Landscape Potential (ELP), winter severity, and permafrost coverage. 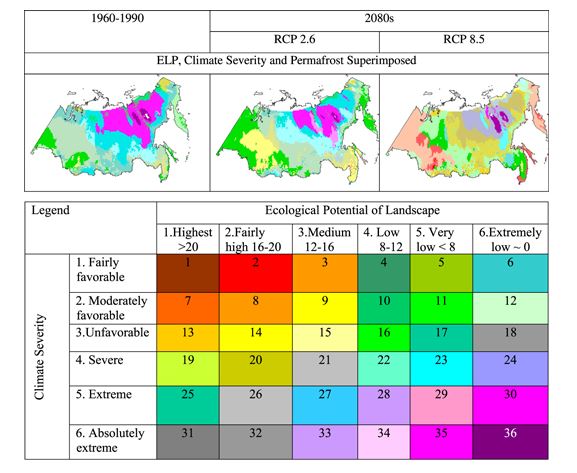 Ecological Landscape Potential, Climate Severity and Permafrost Superimposed in contemporary (1960–1990) and the 2080s RCP 2.6 and RCP 8.5 warmed climates over Asian Russia. Blue line is the permafrost border. Key. See the Legend for all combinations between ELP and Climate Severity.

If the RCP 2.6 scenario occurred, the ELP for human sustainability would improve in more than 15 percent of the area, which could allow for a five-fold increase in the in the capacity of the territory to sustain and become attractive to human populations. Russia would not be so cold, and therefore food security in terms of crop distribution and production capability is likely to become more favorable.

Don't start buying land there just yet. Though negativism abounds, some also believed that we could never produce enough food to feed 2 billion people and that infant mortality was not solvable. Science and technology can solve this too.
News Articles
More Articles All Articles
About