Bente Lilja Bye
On March 17th 2009 Europe's first geodetic satellite was successfully launched from the Plesetsk Cosmodrome in Russia. The first stages of putting the satellite in a stable recording orbit are proceeding according to plans. So far, so good. 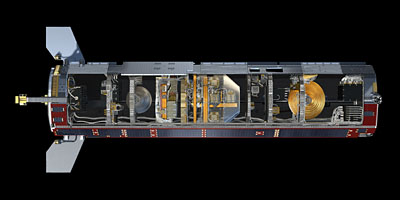 
I feel a little bad withholding this terrific news from the European Space Agency. It is wonderful news for the international geodetic community as a whole. In fact, it is good news for all of us. GOCE will collect data that after thorough analysis will improve our knowledge about ocean circulation, sea level and provide us with even better tools and models for understanding and some day forecast natural hazards.

As this satellite's orbit is fairly close to Earth, the atmosphere will influence it. Therefore ESA has installed some pretty groovy new technology using, of all cool material, xenon. GOCE will from time to time get a xenon boost to keep itself in a feefall orbit. The orbit has to be incredibly stable for the data to be as accurate as we want, and need, it to be.

Later in April the last fine tuning of orbit and testing of the onboard instruments starts. After working on this thing for a decade or so, this is an almost unbearable thriller for us involved.