Tommaso Dorigo
The Moriond EWK conference is in full swing and results are being shown of the recent new searches for rare decays of the Bs meson. The Bs is a hadron made up by a bottom quark and a (anti)strange one. The peculiar composition of this particle and its zero electric charge make it a very interesting probe of new physics in its decays: new physics processes might give a sizable contribution to the rate of decays yielding pairs of muons, which are both very rare in the standard model, and very easy to identify in the detector.

So far, all searches have been unable to measure a significant rate for this rare decay, and smaller and smaller upper limits have been placed to it. But this year for the first time the collider experiments have sufficient data to start detecting a signal. The funny thing is that there is presently a fierce competition on this particular piece of subnuclear physics, because CDF and DZERO with their 10-inverse-femtobarn datasets are competitive, although slightly disfavoured, with the CMS, ATLAS, and LHCb experiments at CERN, which have smaller integrated luminosities (5 inverse femtobarns for CMS and ATLAS, and 1 inverse femtobarn for LHCb) but larger center-of-mass energy (7 TeV versus 2 TeV).

So what are the results ? Did a signal incompatible with the Standard Model show up anywhere yet ? Let us see what I can say today.

CDF has recently updated their search results, and they do see some excess of signal-like events. They measure a branching fraction of 10+8-6 billionths, which is larger than the Standard Model prediction, but of course compatible with zero. (But beware: when you see a large relative uncertainty in a rate measurement, it is not always granted that the result is compatible with zero - the uncertainty might be due to signal efficiency rather than the statistical precision of the data themselves, so the signal could be "several sigma" away from zero even if the error bar covered zero! Not in this case, though...)

And as for CMS, my experiment will present their result today in La Thuile... I prefer to wait for that before I say anything !

Instead, LHCb has presented their search results yesterday. And here is what they measure: a branching fraction of 0.8+1.8-1.3 billionths, and a 95% CL upper limit of 4.5 billionths. The LHCb signal sample is shown in a mass distribution of muon pairs below: 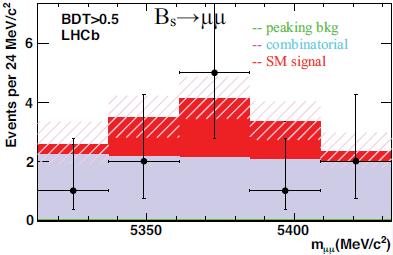 The red histogram shows the expected standard model signal, while the grey histogram is due to combinatorial backgrounds. The data (black points with asymmetric error bars) show the event counts and the estimated 68% central interval to the rate per bin. If there was new physics, one would have seen a much larger number of signal candidates...

So, it looks like there is no new physics in this final state after all, and that things are all consistent with Standard Model expectations. How depressing, isn't it ? Well, only if you placed any trust in Nature (the bitch, not the magazine) being kind to us enough to leave traces of physics beyond the Standard Model in such easy-to-spot places!

In any case, I congratulate to my LHCb colleagues for the nice new result, but I need to express my dissatisfaction with the way they report their result for the "best estimate" of the Branching ratio.

Perhaps it is best to make a step back, and look at the plot above: it correctly shows asymmetric error bars on the event counts, to show what values of the true rate in each bin are compatible, at 68% confidence level, with the observed rates (the points, which by themselves do not have an error, being obseved counts). This way of showing the data is totally acceptable, since the error bars drawn this way will indeed "cover" (or overcover, of course, because of the fact that the data only takes integer values) with the stated 68% confidence level.

Instead, what is the business with the branching ratio of 0.8+1.8-1.3 billionths measured by LHCb ? What are these error bars supposed to mean ? The quoted interval (-0.5 to 2.1) contains unphysical negative rates, and is the result of a construction of the error band which neglects to cut those away -in fact, according to the slide I read the number from, it is not a band but rather a delta-log-likelihood interval, which is known for its shortcomings in the case of small event counts, besides the obvious problem with the neglected unphysical boundary.

The stark contrast of the correct-coverage classical central intervals plot on the mass distribution with this "delta-log-likelihood" interval attached to their max-likelihood BR estimate is rather annoying to me. Am I being picky ? Well, you can judge by yourself. As for me, I sincerely hope that LHCb will use the Feldman-Cousins method for quoting a meaningful interval on their BR measurement, when this result finally goes to publication...
A Quantum Diaries Survivor
More Articles All Articles
About