Tommaso Dorigo
And after all I said about Supersymmetry being an invention, I fear I now have to eat it all with my hat to boot ! The ATLAS Collaboration has just released results of a very striking search for gluinos, which increases the sensitivity over past analyses by employing a much improved and cleaned-up version of missing transverse energy along with a higher-resolution version of the effective mass variable used in the past, and has found a first strong evidence for Supersymmetric decays !!

I am disrespectfully happy despite this might mean I have lost a $1000 bet -an "insurance bet", if you like- I placed six years ago with theorist Jacques Distler and experimentalist Gordon Watts (and the latter belongs to the ATLAS collaboration, by the way). The events unearthed by ATLAS in their 2011 data, which had been overlooked by previous versions of missing ET plus jet search signatures, have no possible explanation in the standard model, while they fit perfectly the hypothesis of a mass>1-TeV gluino. I have not had a chance to screen the material carefully yet - will update this post as I go along, but check this distribution below first. It shows the missing transverse energy distribution in events containing one electron after the refined selection strategy of the ATLAS analysis. 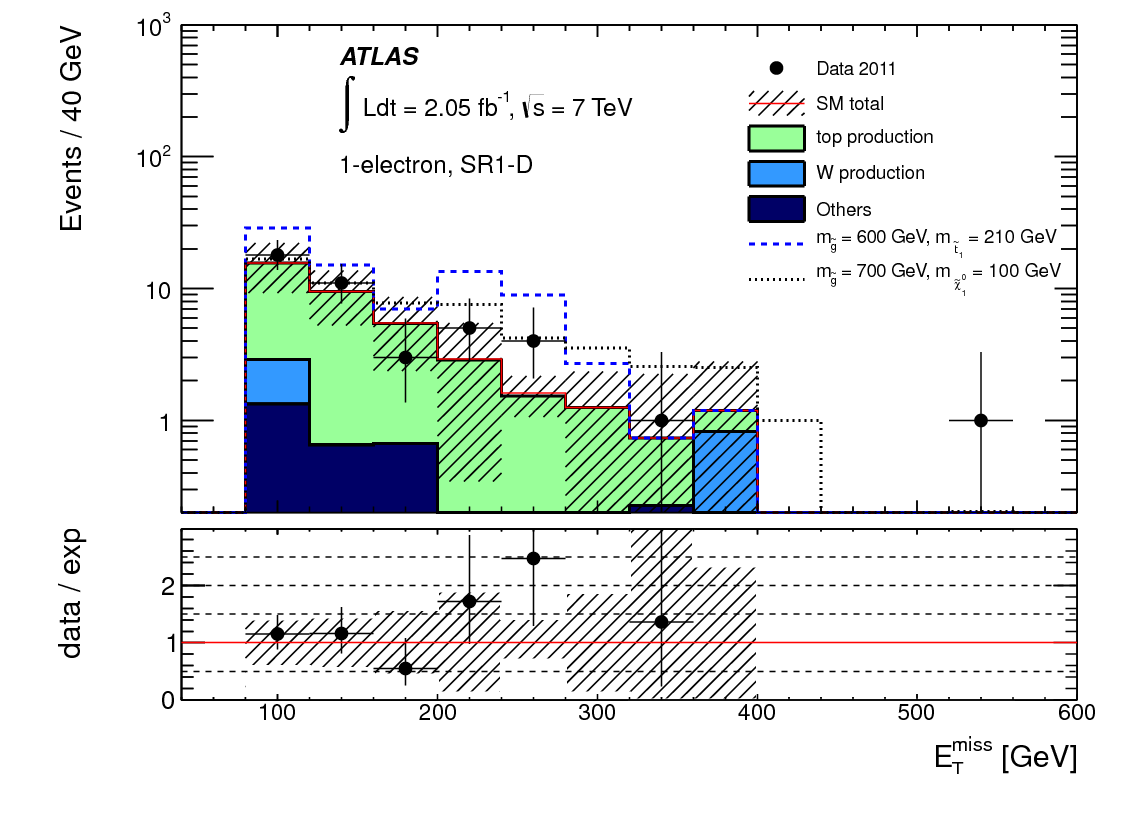 Yes, the point at the far right in the figure above is what you should concentrate on. One event, in this search subchannel. Only one event. But ATLAS estimates that standard model backgrounds amount to basically zero events in their signal region, missing ET>500 GeV. It is in such situations that one event grants a clean observation of a new signal. But if this odd event were all ATLAS has, one could remain unconvinced, of course. Why, the CDF experiment once saw a striking event which had an even smaller probability of being due to backgrounds, and had all the features it was expected for a cascading SUSY decay... But later no other such events turned up, and it was archived as a fluctuation, mixed with a detector problem. Here, the story is different, though.

See the following figure. A different search channel, the one including no charged leptons - and another event pops up at an abnormally high value of effective mass, 1500 GeV ! Please note that the dashed blue curve is what one expects to see for a 800-GeVgluino, while this signal must correspond to a gluino with mass well above a TeV. Also note how standard model backgrounds are practically non-existent above effective masses of 1200 GeV. 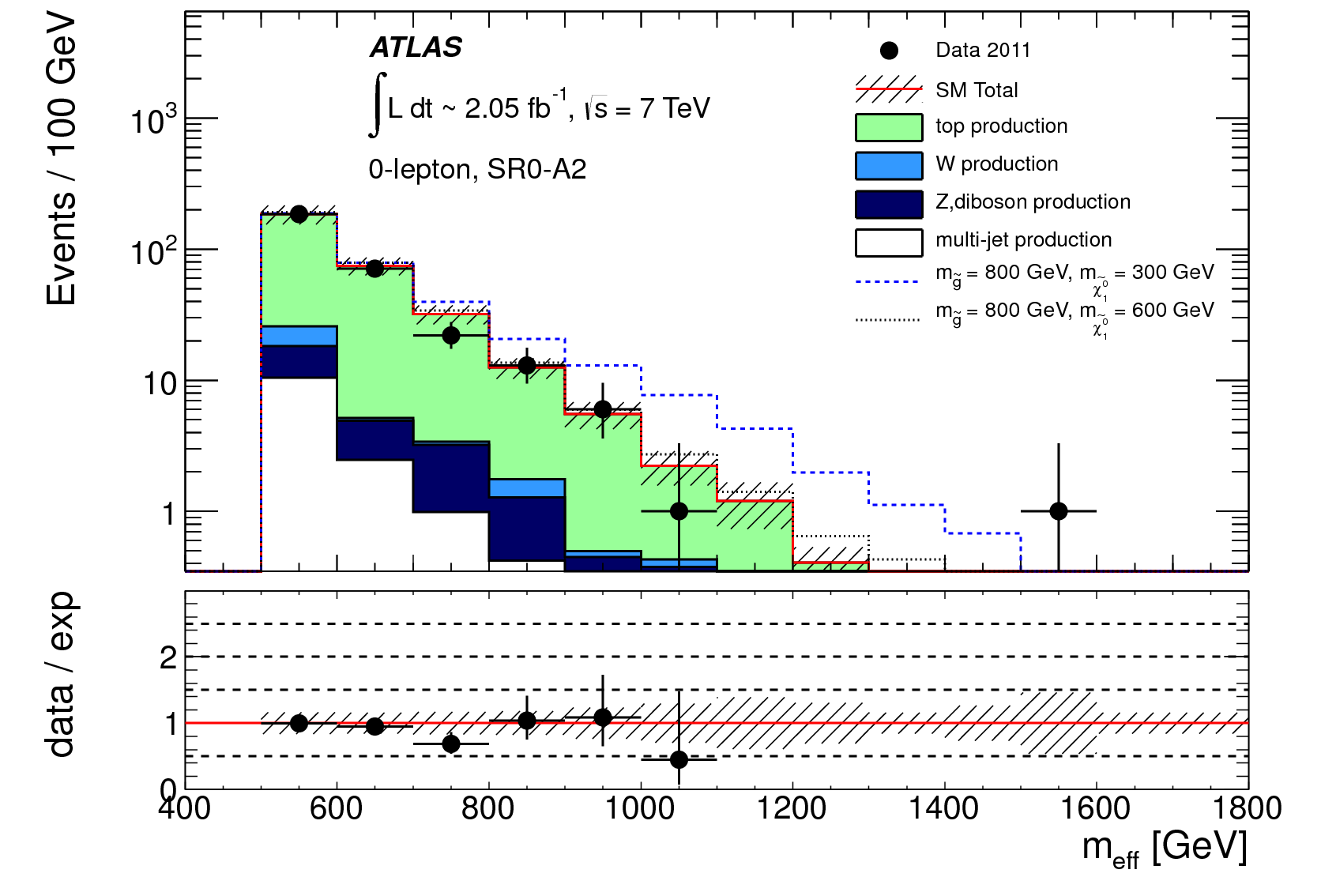 Finally, maybe a little less striking, but actually not less significant, is the observation of three events in the tail of the effective mass distribution in an orthogonal signal box, see below. Again, the events are compatible with being produced by the chain decay of a >1-TeV gluino (the dashed blue line again indicates what is expected for a 800 GeV gluino). From the little I understand of the ATLAS analysis -which is approved, but as far as I know has not yet been made public- these events have been studied with great care and they are picture-perfect SUSY decays! 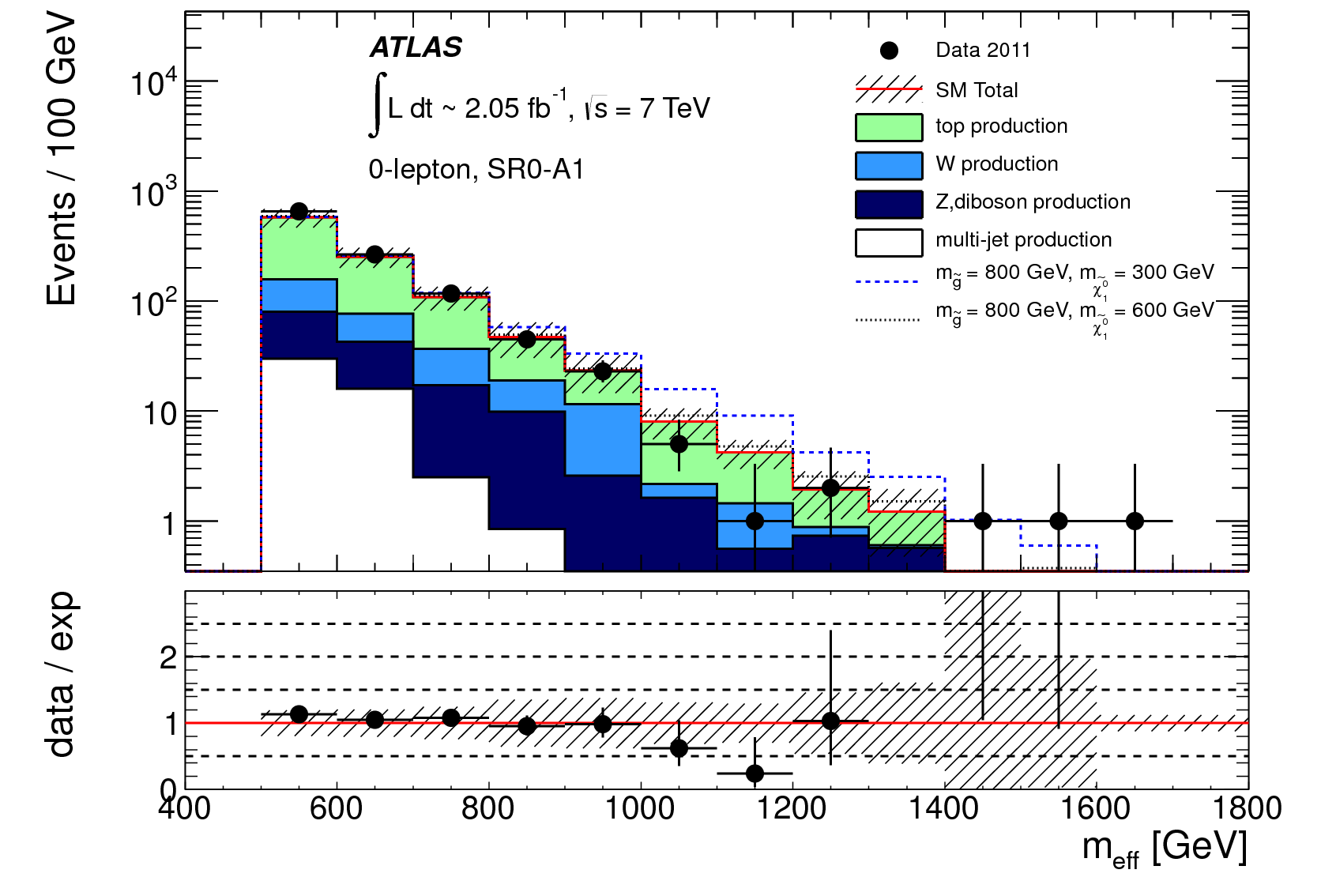 Stay tuned as I try to gather more information from my ATLAS friends!

UPDATE: Of course this was an April's Fool. But the plots above are real, as are the events in the tails... I will have a serious piece on this analysis out soon.