The first reported direct detection of gravitational waves via the B-mode polarization of the CMB may have supported the simplest and most popular inflationary models.  Results from the European Space Agency’s Planck CMB observing satellite may or may not contradict these new findings.  Great, what does any of that mean?  I present a plainly worded, but not patronizing, explanation of all this.  The B-mode polarization of the CMB is what it is called but what does that mean and why is it important?  How might this week’s smashing announcement be confirmed or challenged in the near future?  Read on for answers to those questions.

What is the B-Mode polarization of the CMB and how is it connected to gravity?

To understand the issues of the B-mode polarization one need to understand a bit of general relativity. General Relativity is a theory built with mathematical objects called tensors.  Fundamentally all numbers are tensors of different ranks.  A common ordinary number, a scalar, is a tensor of rank-0.

c, the speed of light is just a scalar.

A vector, a number with both a magnitude and direction, is a tensor of rank-1.  For example if I tell you to travel 200 miles north by north west; that is a vector.  You use these all the time when following GPS directions.  In physics most things we are interested in can be done with just scalars and vectors.  For a long time we thought Gravity was that way too.

For example the force of gravity between two objects according to Issac Newton.

Or the velocity of a ray of light would be the speed c, along with some vector to indicate it's direction.

Then Albert Einstein came along with his theories of relativity.  Special Relativity held that the speed of light was constant in all reference frames.  This solved problems which we had with electrodynamics.  This also created problems with gravity as it was then known.  In Newtonian theory gravity moves at an infinite velocity.  Einstein solved this by limiting gravity to the speed of light.   The cost of this was he made gravity into a theory that used a more complicated mathematical object called a tensor of rank-2.

For example the Minkowski metric tensor operates on two vectors and outputs a scalar.

For example the Einstein Field Equation of General Relativity,  which shows how given a distribution of mass and energy, symbolized by a stress-energy tensor T we can solve for the metric tensor in that region of space.

(Note the G without the Greek letters in this equation is the same G that appears in Newton's equations).

One such strong interaction between gravity and electromagnetism could have occurred a tiny fraction of a second after the big bang proper.  This interaction is known as cosmic inflation.  This model was proposed originally to deal with what is known as the horizon problem.   Put succinctly, if the universe started from a tiny small point, and one side of that point raced away from the other at the speed of light, then one side of the universe should be very different from the other.  They are not.  When we look at the temperature of the CMB it is the same all around.  Inflation solves that problem.    (A less favored explanation has been that the speed of light would have been much greater for a similarly short time.  There are also competing theories which do not include inflation and rely on extra dimensions etc.)

In cosmic inflation models the universe is forced to expand faster than the speed of light for a very brief period of time by the presence of a short lived extra force of nature. In the simplest models there is a scalar field causing the inflation.  In the more complicated models the inflationary force is composed of scalar, vector and rank-2 tensor fields.   As these fields decay the drive the universe to expand rapidly and fill it with particles. These heat the universe evenly and explain the relatively uniform CMB temperature.

What the latest results observed was a B-Mode signal…a sign of a strong tensor field interacting with charged particles at the time of the big bang.  This field is the field of gravitons, spin-2 particles mathematically represented as tensors of rank-2.  This signal if verified by the Planck mission will be a very strong support for the inflationary model as well as the dominant Lambda CDM cosmology.  I strongly suspect that the various models of alternative gravity and F(R) gravity, and other alternative theories can be adjusted to fit this data just as well. LCDM is the simplest model, at least conceptually, and so it will continue to be favored. 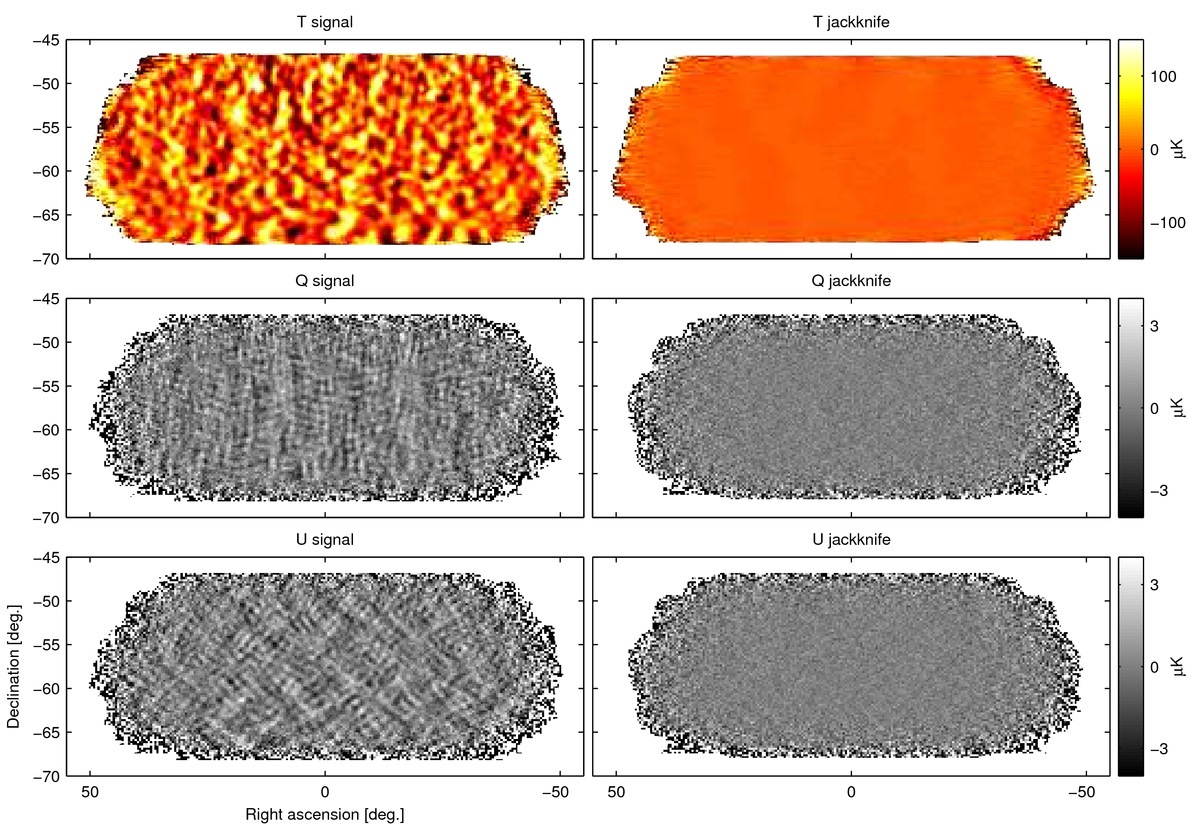 As the team that observed this describes it.

"Figure 1: BICEP2 T/Q/U maps. The left column shows the basic signal maps with 0.25° pixelization as output by the reduction pipeline. The right column shows difference (jackknife) maps made with the first and second halves of the data set. No additional filtering other than that imposed by the instrument beam (FWHM 0.5°) has been done. Note that the structure seen in the Q&U signal maps is as expected for an E-mode dominated sky. (http://bicepkeck.org/#figures) "

The real fun will be if this observation is NOT verified by the Planck data which will be released later this year, perhaps at this April's APS conference.  (Which sadly it looks like I will not be able to afford to travel to.  It seems that Adjunct Professors teaching Astronomy don’t get funded travel.  At least I have a job.)  In that case the field will be wide open for theorist until some third observation can break the tie.  Another possibility will be that if the Planck observations vary considerably from the BICEP2 observations that the community of cosmologist will take a hard look at both data sets and decide one is more reliable than the other.   This is an interesting time to be a cosmologist, astronomer, or astrophysicist.

To see the actual paper released which has caused all this news.  http://bicepkeck.org/b2_respap_arxiv_v1.pdf

My personal opinion after reading this paper is that the team really did every conceivable check for errors.  Unless there is some atmospheric phenomena that has fooled them, and which I cannot think of, then their data should be confirmed by Planck’s space-based observations. Perhaps we are not in trouble after all.  Which...would be boring.