Hontas Farmer
Satoshi Kanazawa has caused a firestorm by asserting that African women are less attractive than other races women. For this he has been called racist. He actually didn’t say anything new, or for that matter scientifically incorrect. However politically incorrect and insensitively stated it was. The man is guilty of being so stepped in his scientific ivory tower that he forgot how what he says may affect real people in the world. That said the conclusions of such work no matter how disturbing and un PC must not be grounds for a scientist in any field to lose his or her job.
He didn’t say anything new because OK Cupid’s researchers found similar results not long ago which are in concordance with what Dr, Kanazawa has said. In ok cupid’s words in one study of messaging rates by race:

Men don’t write black women back. Or rather, they write them back far less often than they should. Black women reply the most, yet get by far the fewest replies. Essentially every race—including other blacks—singles them out for the cold shoulder.

Even more disturbing from another study by OK Cupid released last year they adjusted for the fact that most people in their population are white using statistical methods. Christian Rudder was nice enough to build an interactive table which I will now borrow an image of with all races equal 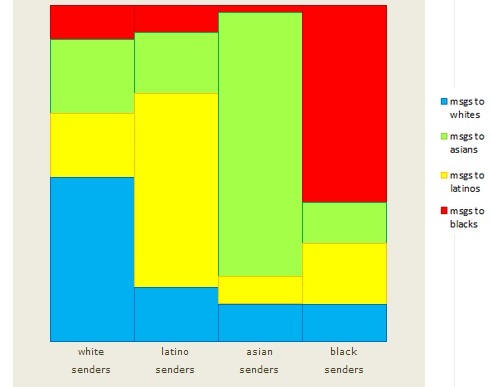 So what gives. Why it that black people in general and black women in particular don’t get as much love as other races? OK Cupids data is revealing because it’s not just answers to a questionnaire taken by a few dozen people. OK Cupid is looking at the actual dating behavior of people who are actively seeking mates. In that situation the PC glasses come off and people reveal their ugly side. Racism is alive and well in dating and it seems to me that Kanazawa was just trying to explain why that might be?

Now as for thinking that black women have more testosterone I doubt that. If that were the case black women would have more hair. African women in fact have less body hair than any other races women. Men and women who are fresh from Africa have little to no body hair what so ever. So he can forget that conclusion.

The Evopsych reasons for this bias against black people lie in modern global society being dominated by 5 billion people who are not of African descent. People are vain creatures and tend to think that people who look like them are good and beautiful and people who are different are bad, threatening and ugly. (For most of human history if you saw folks who looked very different then they were an invading army or you were invading them.) So is what Dr. Kanazawa wrote reflective of his own racism or is he simply reporting what people who study human behavior have noted for a while?

Many have pointed out that black women’s beauty is not appreciated for some reason. Just look at the fashion magazines, and in Hollywood. Just look at the lightening creams sold in India to make women less dark. Just look at the fact that within Europe for a woman to be fair haired and light eyed is considered the gold standard over darker haired women.  He did not make that so by writing a blog it was so long before he was born.

Is what he said insensitive and stupidly worded? Yes, but it was not scientifically and objectively wrong.  Beauty is in the eye of the beholders... and it seems to many who behold an African person they are not beautiful.    No matter what they may say their actions, as OK Cupids data shows, say otherwise.

As a theoretical cosmologist I can relate to what people like him go through. My own research interest steps on the toes of every single religion on earth. Just look at what Hawking is dealing with in terms of his comments on religion. If offending people with research results will once again cost a scientist their job we can bet on a global dark age.

Let’s see if the media outlets making hay out of this matter decide to change how they portray African descended people to try to correct the damage they have done?

Edited to add:  This author has had to endure comments on how "sketchy" Ok Cupid's data was.  Thanks to the LA times they took a good close look at OK Cupid's research department.  As it turns out they are people with degree's in mathematics from Harvard.  :)