In their study  Hsu et al (K. J. Hsu 2015)  recruited men in search of NSA sexual activity off various websites (such as Craig’s list).  They had to fill out a questionnaire about their sexual identities and histories as well as a psychological screening was done.  Then using an electronic strain gauge changes in the circumference of their penises were measured.  They were shown porn featuring the groups mentioned earlier.    There were 21 gay men, 21 straight men, and 21 men who are attracted to transwomen.  (The term they use for people attracted to transwomen is gynandromorphophilic   or a GAMP.  A gynandromorph  GAM is a biological male who through various means is feminized.)  Small sample size means this study can only be suggestive but not conclusive.   This was the result. 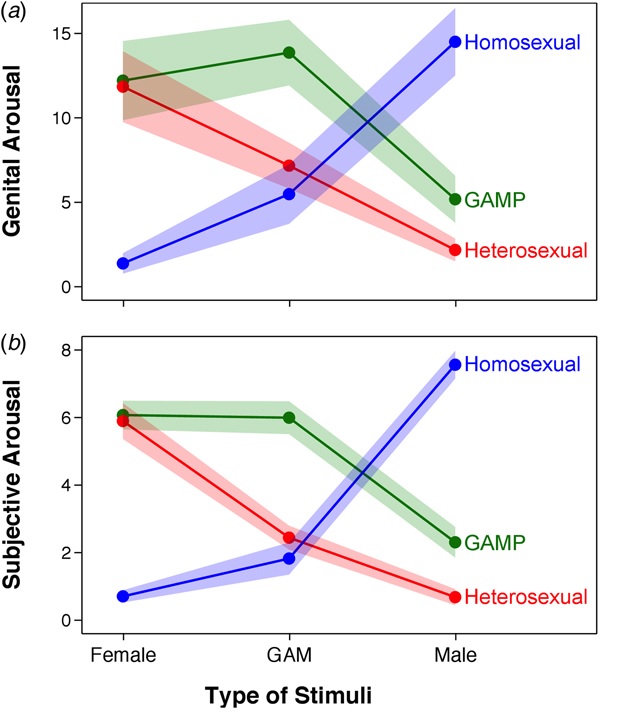 The data of figure 1 show that in clear objective terms the reactions of the selected homosexual men were very different from the heterosexual men or the GAMP’s.   Men who are attracted to transwomen are MUCH closer to heterosexual men in their anatomical response.

For all transgender people on of the big life problems is finding a mate.  This is not easy for anyone as the proliferation of dating services, matchmakers, etc shows.  However, for transgender people this is extra challenging since we bring up issues of sexual identity for whoever finds us attractive.    Straight men and women fear that liking a transwoman or transman makes them gay or lesbian.  Lesbians and gay men fear that liking a transwoman or transman might mean they are straight… and every possible combination.   Very often transgender women  and transgender men (people born basically biologically female who are sociologically more like men) face this stigma in their personal lives.

Since a picture is worth 1000 words I have come up with a combination flow chart and Venn diagram showing all the interrelationships I can think of.  Like any map of a place, no finite number of elements can perfectly capture all the relief and details of the real world.  Certainly I have missed something. 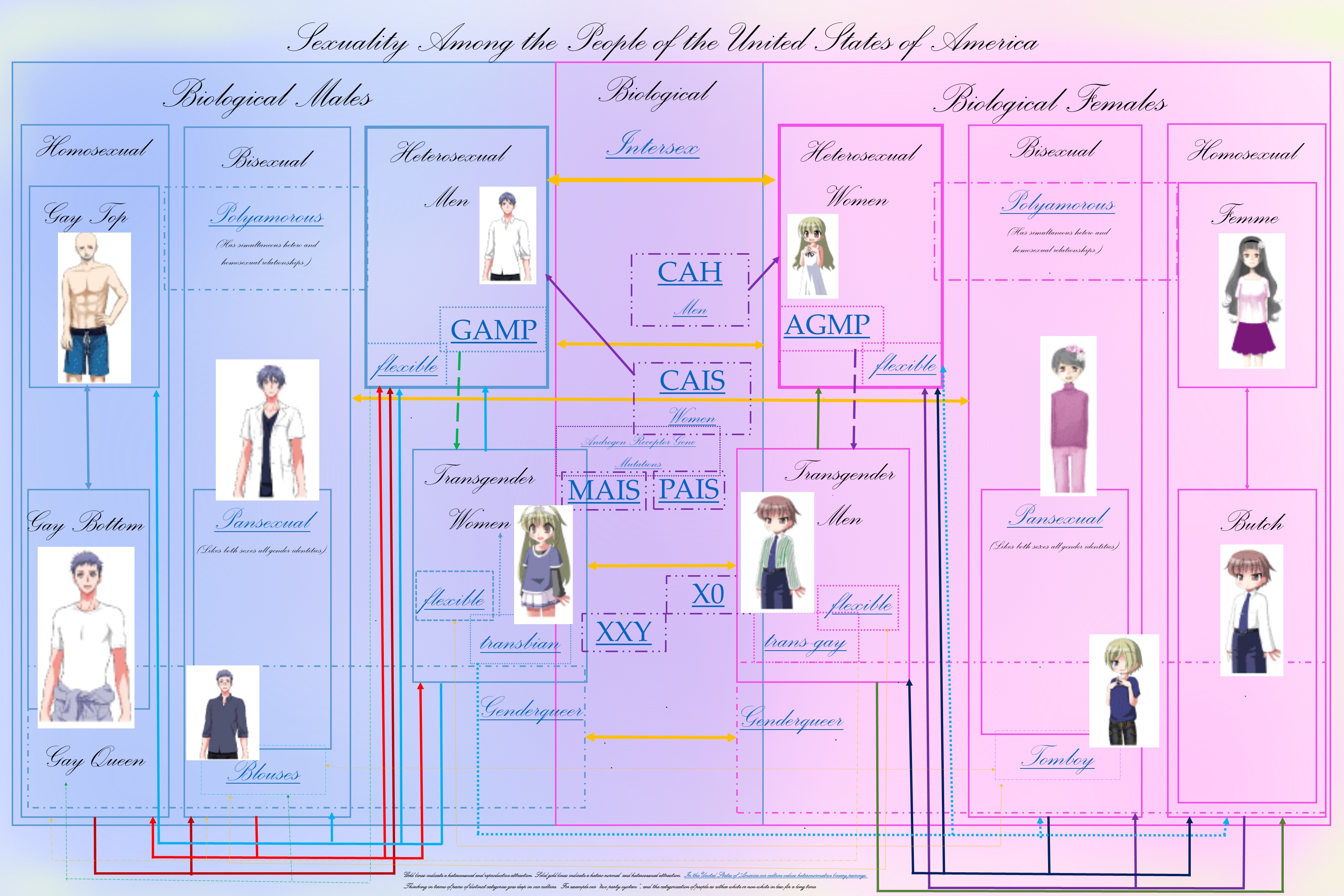 2 Click for a larger version The images were taken from a similar chart made regarding Thailand which inspired this one. I also took care to include people who are intersex.  The idea of variations in biological male and femaleness is also coded in the two blue and pink boxes. Relationships indicated by big solid gold arrows indicate those which US culture finds most acceptable. They are what most people here think of as “straight” in some form due to reproductive potential. (Pew Research 2013). According to the research a het man attracted to a transwoman is more like a straight man than a gay man.  Notice how heteronormativity is baked into even homosexual relationships.

As figure 2 shows, in the United States of America we like heteronormative relationships which will produce children much more than all others.  So you can find Christian conservatives who would be against gay marriage but OK with marriage of a transwoman to a transman, or a gender queer male to a gender queer female, or between bisexuals of the opposite biological sex.  All other pairings, ones that can’t produce children without outside medical help are the ones that are taboo or gay by that standard. The conservative Christian standard is by no means universal in the United States of America but it does predominate.  Very often those who will say they don’t judge others apply that standard to their own personal associations.  A sort of “not in my back yard” effect where in theory they are ok with LGBTQQAI etc. people as long as they are at arm’s length.  Yet, it has been my personal observation that relationships with a potential for procreation no matter the lifestyle and gender identities involved get a pass.

TL:DR; If you are a man or woman attracted to transgender men and women it does not undermine or change your core identity as straight or lesbian or gay.  Liking a transgender man or woman or someone genderqueer just means that you can find attractive one more very small group of people.

FYI: On figure two I would be in the area where transgender woman and genderqueer male overlap. Somewhere between David Bowie and Caroline Cossey.