However, solar power is intermittent, even in deserts, with day night cycles. Wind also is unpredictable. Tidal power is intermittent also. Hydro power on the land is limited - and also often has environmental impact because of the need, usually, to dam a river to get it.

The Gulf Stream runs continuously year in and year out. They could be an important part of our energy mix in a sustainable clean energy future for the planet, taking over from other 24/7 load power sources like oil and coal. For instance, a thousandth of the energy from the gulf stream could supply 35% of the energy requirements of Florida.
Florida is where the gulf stream "starts", and has a tight ocean current, good place for a pilot scheme in subsurface ocean currents.

The  Florida current, start pf the Gulf Stream,  a natural site for a pilot ocean current plant, and where this kickstarter plans to site it.

Other places where ocean current energy could be a valuable part of the energy mix include places with shallow waters and sea lochs.

Here in Scotland, not far from where I live, we have the falls of Lora where Loch Etive pours into the sea, sometimes quite a spectacle.


There are rapid tides that move clockwise and then anti-clockwise around the islands depending on the tide - and strong currents in the English Channel also. Though they are intermittent, because of the complex coastline then different parts of the coast have currents at different times of day - though as they are tidal currents would be strongest at spring tides. It's not quite the 24/7 of the Florida current - but you can well see them filling in gaps in solar and wind power coverage for the base load.

Other places with strong tidal currents include UK, Ireland, Italy, Japan, Philippines, parts of the US,

Sea water is 832 times as dense as air, providing a 5 knot ocean current with more kinetic energy than a 350 km/h wind.


According to the Ocean Energy Council, "Ocean currents are one of the largest untapped renewable energy resource on the planet. Preliminary surveys show a global potential of over 450,000 MW, representing a market of more than US$550 billion.".

Major currents of the world, red ones are warm, blue ones are cold. Some are in remote locations, and some are too slow moving to be easy to extract but some are close enough to land masses with populations and industries with significant amounts of power consumption - and powerful enough to be of considerable interest, especially, the Gulf stream.

They represent a vast amount of energy, many times the worlds total power requirements though of course you'd only extract a tiny fraction for power.

There are many other tidal currents on a small scale not shown on the map, for instance around the islands of Japan, the Philippines, around Italy and the UK. 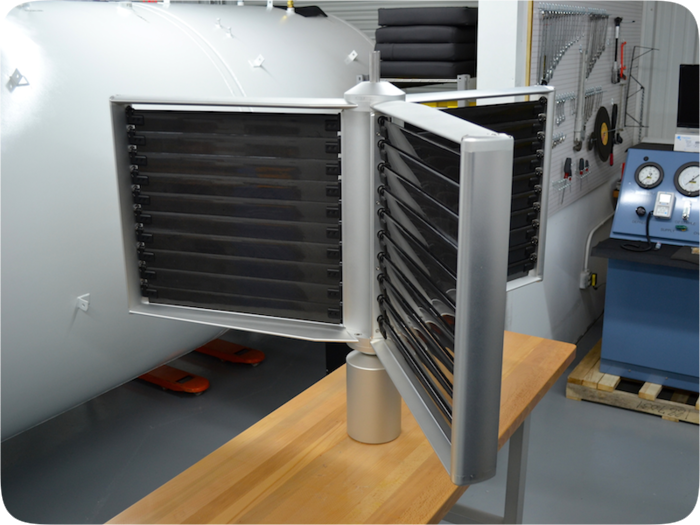 Because water is so much denser than air, then you can generate power from a slower current, just one mile per hour. As a result, it's not a hazard for the marine environment, unlike the much faster wind turbines, which have to be sited with care.

The way they work is innovative, the shutters open when they are moving against the current and close when moving with the current, so turning a steady current into a rotating motion.

They will also use the turbines to generate clean drinking water from the sea, which may end up being as important as the power generation.

The aim of the kickstarter is to test a 52 inch prototype in the lab. That would lead up to a full trial off the Florida coast later on which will take power to land via a DC cable. He is working with the Florida Atlantic University Southeast National Marine Renewable Energy Center

Their kickstarter ends in a couple of days.  Since kickstarters often get many of their donations in the last couple of days, they do have a chance, but I think not a huge one. They are obviously new to kickstarter and had various issues with the campaign .

However, if you like the idea, this is an opportunity to show your support. Also, they will probably launch again, which is permitted on kickstarter, even the exact same project. You can show your support this time around by pledging to the project if you are interested in it.

I started a kickstarter myself recently, and found this while looking at other technology related kickstarters.  I usually post on space issues, and on music. There's a connection with the space articles as of course, one of the possible future benefits from space is unlimited solar power from satellites, which again I think might be part of the future energy mix, similar advantage that it is all round uninterrupted power.

However, this is a far simpler method to achieve uninterrupted renewable energy, with a surprising amount of potential, and perhaps will be part of the mix in the future.

Any thoughts or background information or questions? Do say in the comments.