Artificial Lagoons In Swansea Can Harvest Energy From The Tides
By The Conversation | March 6th 2015 06:00 AM | Print | E-mail

The search for alternative energy sources in the age of climate change has overlooked tidal energy: a vast and unexploited worldwide resource.

For three decades now, tidal lagoon schemes have been recommended as an economically and environmentally attractive alternative to tidal barrages. More recently, two proposals for tidal lagoons in Swansea Bay, Wales have emerged and there have been several reports documenting how such a project there could have the potential to harness significant energy resources.

Tidal energy involves constructing a barrage, a dam or some other sort of barrier to harvest power from the height difference between high and low tides.

The power is generated by running the water through turbines, found within the barrier. The technology used is very similar to that found in hydropower schemes, however unlike rivers tidal currents run in two directions.

Where a tidal barrage blocks off an entire estuary, a tidal lagoon instead impounds an artificially created area of the sea or estuary. A lagoon doesn’t necessarily have to be connected to the shore – it could even sit out in the ocean.

As the tide goes out the lagoon remains closed, and full. It then opens the flood gates to let the water out until water levels on each side of the lagoon wall are even. When the tide comes in the process is reversed. 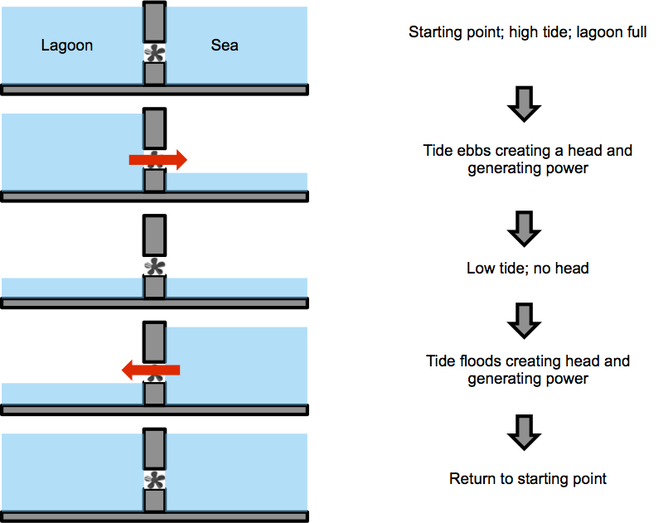 It’s tough to estimate exactly how much tidal power can be exploited, but the UK may have close to half of Europe’s total. And few potential sites worldwide are as close to electricity users and the transmission grid as those in the UK.

Swansea Bay is located in the Bristol Channel on the South Wales coastline. As part of the Severn Estuary it experiences one of the world’s largest tidal ranges, often reaching 10m.

A tidal lagoon has been mooted in the bay before, back in 2004, but the latest proposals are on a grander scale. The structure shown below would cover 11.5 km2, cost £913m to construct, and would be capable of generating 495 GWh per year – enough energy to power 155,000 homes. The lagoon will take up a big chunk of Swansea Bay. Case

The Swansea Bay scheme demonstrates a renewed interest in tidal power, which has many advantages compared to other renewable sources. It is well documented that increasing integration of volatile, unpredictable sources of renewable energy such as wind and solar power jeopardises the stability of the power grid.

In order for the grid to remain stable the power generated at any instance has to match demand, therefore it is important that the transmission network contains power sources that are immediately available. While the sun may stop shining, and the wind can drop, the tides remain predictable – an obvious advantage for tidal power and a great help for National Grid forecasters. Yet improvements are still needed. The upfront costs remain high, and there are some ecological implications. Experiences with artificially closed compounds have demonstrated that the costs of managing an artificial tidal basin (for example in the case of La Rance, Brittany, and Cardiff Bay), Wales are high and need careful monitoring and planning.

Turbines can become more efficient, perhaps learning from the wind industry about aspects such as varying the speed of turbines. We need to develop better 3D modeling to get a better sense of how the tides ebb and flow, and how turbines perform under turbulence.

But there are important positives that should lead to more tidal power. The re-opening of dams and barriers, often built between the 1950s and 1970s can have great ecological benefits for the water bodies behind them due to a creation of a gradient that is beneficial to aquatic ecology (brackish water) and an increased oxygen content; in such instances, tidal technology can also be used as a tool for water quantity management, while generating power.

They can actually improve some ecosystems and have additional societal benefits besides renewable energy such as flood defense, environmental and ecological water quality improvement, fisheries and even tourism functions.

New technologies are being developed that would allow energy to be harvested from new areas, where the difference between high and low tides are measured in centimeters rather than meters. All this make an investment in a tidal lagoon for Swansea Bay seem like a strong investment in the future.