Stephanie Pulford
Cicadas might have used their wily prime number scheme to dodge 2 and 4 year predators, but what about a predator with continual exponential growth?

The microcircuitry industry has reliably doubled the density of transistors on a chip every 2 years, as observed by Gordon E. Moore in 1965. This exponential density growth trend is known as Moore’s law, and satisfying it requires that nanofabrication techniques are constantly embraced, devoured, then cast aside.

Unlike fish and birds, Moore’s law isn’t interested in the cicada’s insect innards, but rather its wings.

The transparent wings of a cicada look anything but glassy under SEM magnification.  Cicada wings are covered in a surprisingly regular carpet of close-packed micropillars, approximately 400 nm high. (For scale,  E. coli bacteria is roughly 2,000 nm.)  To the cicada, these pillars are for reducing wing reflectivity.

To the nanofabrication industry, these pillars are a perfect geometry and chemistry to make high-resolution stamps. 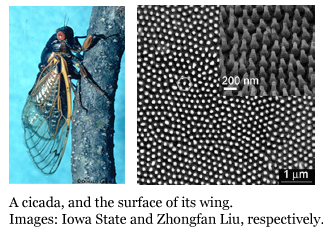 Nanoimprint lithography, the use of stamps to create tiny features on wafers and chips, is an advancement of photolithography.

To make features using photolithography, UV light is shone through a computer-generated mask  to create patterns on a photosensitive surface. The light changes the surface coating’s solubility so that parts of it can be washed away in a liquid developing solution.

This bares parts of the wafer’s surface, leaving them vulnerable to etching with chemicals or plasma.

The resolution limit of photolithography is the wavelength of the UV light.  It generally can’t produce features smaller than 300-460 nm. But Moore’s law is a resolution glutton, and it surpassed the need for 400 nm features long ago.  To go smaller, we can use smaller beams like X-ray, or turn to different patterning strategies altogether.

By using tiny stamps to blot on protective coating, nanoimprint lithography is limited only by the size of the stamp feature.  The 80-nm pillar-tips of the cicada’s wing, along with its nonstick surface chemistry, make it an ideal tool for nanoscale templating.  Pictured below are microwells that were made with a process using cicada wing stamps. 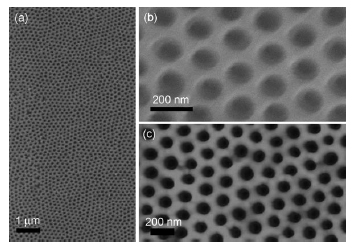 Cicadas, there’s a loophole for you to exploit.  The researchers can’t use a dirty cicada wing.

Normal stains on cicada wings stick their pillars together, making them useless for stamping.

A cicada wing has to be cleaned with acetone before stamping.  Savvy cicadas can coat their wings with superglue, since acetone doesn’t do much to cyanoacrylates.

NOTE: I assume no responsibility for reduced flight capability due to heavy, crackly superglue wings.