Stephanie Pulford
Half-biological and half-synthetic, an army of thousands of wrecking balls are contained within Dr. Metin Sitti's Carnegie Mellon laboratory.  Once incited, they keep moving to the death.  They run on sugar.  And they can all be taken down by penicillin.

Sitti’s army is a cadre of Serratia marcensens bacteria-coated polystyrene microbeads, propelled by the bacteria’s innate restlessness.  To Sitti, recruiting bacteria to form the propulsion side of a microprojectile is more than a fun day in the lab.  These tiny living robots are the foundation for the future of biointegrated micromachines.

Combining microorganisms with micro electromechanical systems (MEMS) has the immediate flavor of running our toasters off of the power of hamster wheels.  Adding a living component to a micromachine seems inefficient and gimmicky, and defeats the sterile high-volume precision we associate with microchips and their ilk. 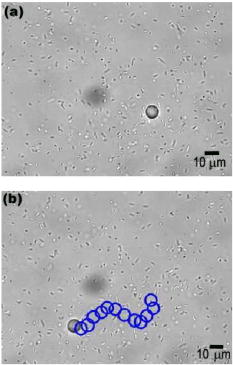 Yet as unpredictable as squishy microscience is, it makes a great complement to existing microtechnology.  Within their microcellular domain, bacteria and cells perform sensing, synthesis, and ordering tasks at resolutions greater than our best photoexposers. We don’t have any microscale tools as complex as a single-celled organism, and incorporating living components into our micromachines is the next best thing.

Robotics’ first forays into microcyborgs embody the Micromachines approach: “Just like the real thing, only smaller”.  Flagellar motors bear a genuine resemblance to the gas-powered box on the back of a motorboat, complete with a molecular rotor and stator.  Sitti used his bacteria-and-bead minions to show that this motor can be reversibly switched off by adding heavy metal ions to the medium.  These paralyze the flagellar rotor, rendering the bacteria useless. Microbiology research has provided a bounty of steering mechanisms for these tiny living propellors through the study of taxis, bacteria’s navigational response to stimuli.

Light, chemicals, pH, ions, surface charges, and even magnetic fields influence the trajectory of bacteria and thus the path of their manmade cargo.

The most successful realm of cell-MEMS interaction has been in the field of cell-based sensing, in part because sensors are able to easily capitalize on the talents of specific microscopic lines. Compare three cell-based sensors:  Antonik’s uses the responsive migration of cells to actuate a microlever, which is in turn recorded by AFM.  Cantilever deflection, like motors, is strongly rooted in macroscale thinking.

The cardiomyocytes in Aravanis’s cardiomyocyte/electrode sensor also respond to toxins, by changing their innate electrical impulse pattern.  Walt’s approach uses the optical response of  fluorescently dyed cells in an array. Better understanding of the behavior of cells will permit microorganism-integrated microdevices to shake off the template of human-sized mechanics and yield designs that capitalize on the diversity of microbiological function.

As you might expect, living components are also the cutting edge of finicky: they require food, certain ranges of temperature and pH, and are sensitive to many chemicals including most of the ones used for microfabrication.  If their demands aren’t met they’ll die, taking their machine’s function with them.

Even under the best circumstances, microorganism reliability is a major stumbling block to integration of microbe and machine.  Al-Fandi et al reported that the average life of their E Coli motors were a mere 34 hours. A 20% speed difference would be unacceptable in two identical motorboats, but this kind of variability is inevitable with living bacteria.

If our current use of bacteria is like training wild horses, genetic engineering is like breeding generations of microclydesdales to haul microBudweisers.

Longer lifespan, increased reliability, overexpression of desirable function, and specific taxis responses can and are being pioneered for machine integration. It becomes the joint task of  microbiologists and device designers to reimagine single-cellular bugs as black-box machine components.