Hank Campbell
I am a big fan of solar power. In Science Left Behind I argued we should be doing basic research to improve our capabilities in the technology so that it can be a viable end game for when fossil fuels no longer make sense.

Instead of following the time-honored road map of using taxpayer money for basic research over the long term, President Obama did for solar what Vice-President Al Gore did for ethanol; he threw a lot of government subsidies at corporations manufacturing existing technology that all experts knew wasn't going to do the job. And then the companies went bankrupt because despite what activists claim about how much cheaper solar is, it doesn't add up in the world of real money.

In 2011, when I was writing that book, Spain and Germany had already shown us the flaws in 'subsidize it and then capitalism will take over' thinking. Green programs in Spain destroyed 2.2 jobs for every green job created and those green jobs cost a whopping 571,138 euros each. While activists were touting Germany as a green energy darling, Siemens was already getting out of solar. In the U.S., even some otherwise science literate people irrationally think their solar panels are "paying for themselves" because they choose to ignore that poor people who can't afford the panels to get the rebates are paying more for conventional energy so solar panel believers can "sell it back for the same price they buy it." Even with blinders on about how capitalism and technology actually work, Solyndra went bankrupt despite getting a fortune from the Obama administration.

Then it happened a dozen more times. The government was picking winners and losers and claiming that would promote the discovery and innovation that only happens in the free market. And it hasn't stopped yet. Solar marketing, bolstered by government largess, is still so strong that even articles critical of solar power make money on ads promoting solar power: 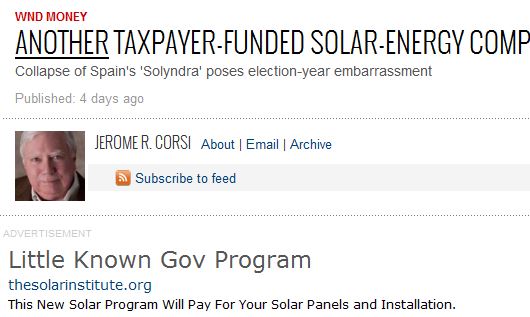 Corsi is talking about Abengoa in Spain, which went into bankruptcy in November and is selling off solar plants for peanuts. Why does that matter to us? Because they got $2.7 billion in federal loan guarantees since 2010 to build solar power projects here. When they are selling off four plants in Spain for $65 million, it is not a good indicator American taxpayers will ever get any of our money back. It is, however, a good indicator we should stop buying magic rocks and calling it energy policy.

I still believe in solar power but it is even more obvious now that subsidizing companies prevents discovery rather than enabling it. Just the Abengoa money alone could have funded 3,000 different labs who would be chasing the biggest Nobel prize ever. Instead, we have to count on the theatrics of election year politics to distract us from the boondoggle that wasting tens of billions of dollars on old technology means the next President is going to look at solar energy as a giant failure of science and not want to fund basic research at all.
Science 2.0
More Articles All Articles
About